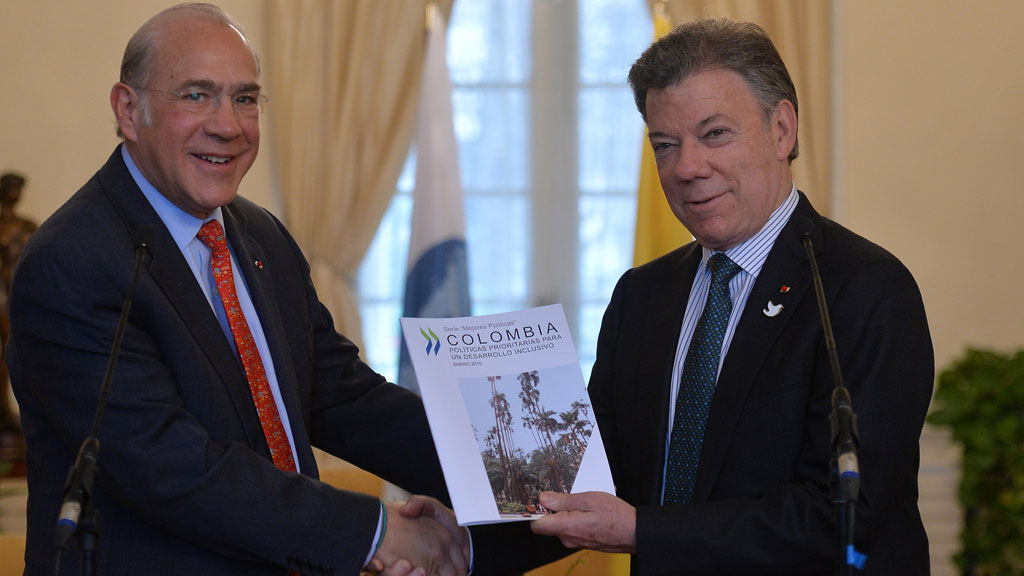 The Organization for Economic Co-operation and Development (OECD) announced a key charter of policy priorities and economic advice regarding Colombia’s economic growth and prosperity.

The Colombian government, currently in the process of a now year and a half attempt to enter the formidable 34-nation organization, engaged the assistance of the OECD to provide substantive input and suggestions regarding the nation’s “National Development Plan 2014-2018.”

The “Better Policies for Colombia” report acts as a supplement to the OECD’s “Economic Survey of Colombia,” presented in Bogota last week.

“Further reforms are needed to tackle deficiencies in the country’s territorial development, education and innovation systems, competition framework, land rights, and infrastructure. Colombia should also consider a reform of its social protection and tax systems to make them fairer and more growth-friendly,” said the report.

The tax reform should become the government’s immediate priority, stated the report, explaining that “tax revenues are insufficient to meet the public spending and investment needed to close the productivity gap. The design of the tax system could be improved to make it more progressive, reduce the negative impact on employment and promote green growth.”

Inequality and slow productivity were other key blights on Colombia’s economy, with the OECD recommending a comprehensive policy reform package to combat the issues.

The OECD report illustrated Colombia’s slow productivity growth, labeling it well below the average level of the organization in which the South American nation is desperately trying to gain acceptance to.

With regard to the OECD’s unsparing opinion of Colombia’s tax system, the OECD expressed its full support for a comprehensive tax reform in the country, taking into account the experience of the organization in this matter.

“We offer that we would gladly contribute to this effort by the President (Juan Manuel Santos) and the Minister of Finance (Mauricio Cardenas),” Gurria was quoted as saying on the President’s website on Tuesday.

In Gurria’s public speech, released on the OECD website, he firstly praised President Santos’ “ambitious reforms to guide Colombia towards a new era of growth.”

This was later qualified with the assertion that, “those achievements should not be grounds for complacency, however. Colombia continues to face very significant challenges as it strives to achieve inclusive growth. And the OECD stands ready to help identify and address those challenges.”