Colombian media on Thursday released a leaflet threatening members of former President Alvaro Uribe’s party, workers for multinationals and a radio station in the northeast of the country.

The threatening pamphlet was focused in the state of Arauca, targeting leaders of the Democratic Center (Centro Democratico – CD) of Uribe as well as radio station “La Voz del Cinaruco” and multinational companies which work out of the area.

The leaflet, dated April 11, is signed by the Eastern Bloc of the FARC, one of the rebel group’s largest military units, and has been publicly rejected by Colombia’s Ombudsman, Jorge Armando Otalora.

The threats come in the midst of the run up to the presidential election on May 25, with the threats against leaders of the Democratic Center (Centro Democratico – CD) prompting Otalora  to demand “respect for the electoral process” as well as warning that the authenticity of the document must be checked.

However Otalora did call for the state authorities to heighten security measures with a focus on prevention and territorial control in order to be able to defend the public in case the threat is realized.

Arauca is part of the Early Warning System initiative implemented by the Ombudsman in March 2013 which was designed to “prevent massive and systematic violations of human rights and international humanitarian law.” The system analyzes conflict and anticipates threats, alerting appropriate authorities and implementing protective measures.

Four municipalities in Arauca use the Early Warning System as they are considered to be at high risk due to FARC and ELN activity in the area.

The allegations come at an unstable time as the Colombian Government and the FARC are currently in peace talks in Havana, Cuba to try and resolve decades of armed conflict between guerrillas and state. 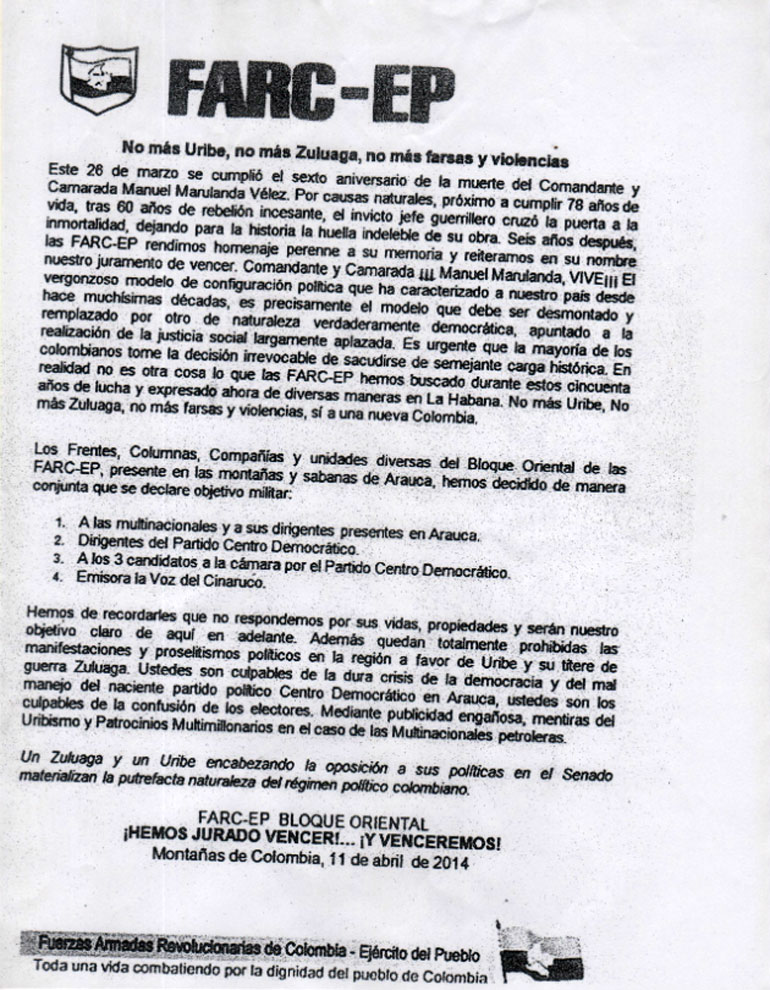