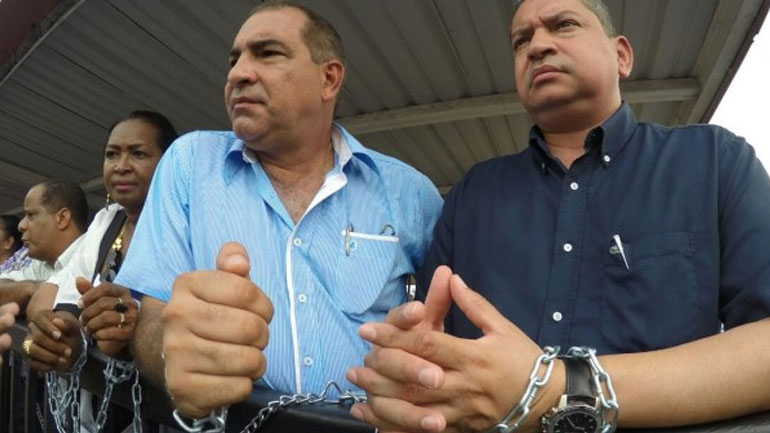 A number of mayors from northern Colombia chained themselves to the entrance of the local energy company in Cartagena in protest of repeated outages and proposed rising costs.

Tuesday’s planned protest of the ten mayors of the Bolivar province was announced on Sunday, before citizens took to the streets of the towns of Marialabaja and Arjona to protest another blackout which reportedly left 300 households without power for over 24 hours.

This is the latest in a number of uprisings through April and May blocking roads, burning vehicles and rioting over the regular unplanned outages and proposed increases in costs from the Commission on Regulation of Energy and Gas (CREG).

Rate increases would be between 1% and 7.5% for those living in different neighborhoods within the Atlantic coastal region.

The Mayor of Arjona referenced the closure of national roads twelve times in the last two months as a result of these outages and stated they were demanding “a little bit of dignity for our people”. The Mayor of Santa Rosa de Lima furthermore claimed that local merchants had reported a decline in sales due to these ongoing power cuts.

After meeting with the leaders for four hours, energy company Electricaribe official Ayleen Alvarez attempted to justify a number of the unplanned outages as “unforeseen.”

The energy company executive highlighted projects in place that are intended to improve the effectiveness of the power supply.

Electricaribe signed an agreement to improve services in the town and vowed to replace the obsolete networks which reportedly account for 70% of the energy use. The mayors furthermore agreed to prepare reports on those processors and networks in need of repair.

Protests and road blockages over blackouts and lack of instability of potable water escalated to riots, looting, attacks on buses and Electricaribe property spread over a number of neighborhoods in Barranquilla and the nearby town of Soledad leaving 1 dead and 6 injured.

“After the approval of the National Development Plan, Electricaribe — in charge of some of the works — will proceed with the investment plan, but we will also open competition so that third parties can realize works like the … ‘electric highways’,” Mining and Energy Minister Tomas Gonzalez told Caracol Radio.

The Minister also said that rate changes would hardly affect lower-income households. Some 300 thousand families that live below the poverty line will see a reduction in the price of energy of 14%, while lower class incomes will see a price hike of 0.58%. Middle class and upper class households will see an 8.4% increase of energy prices.