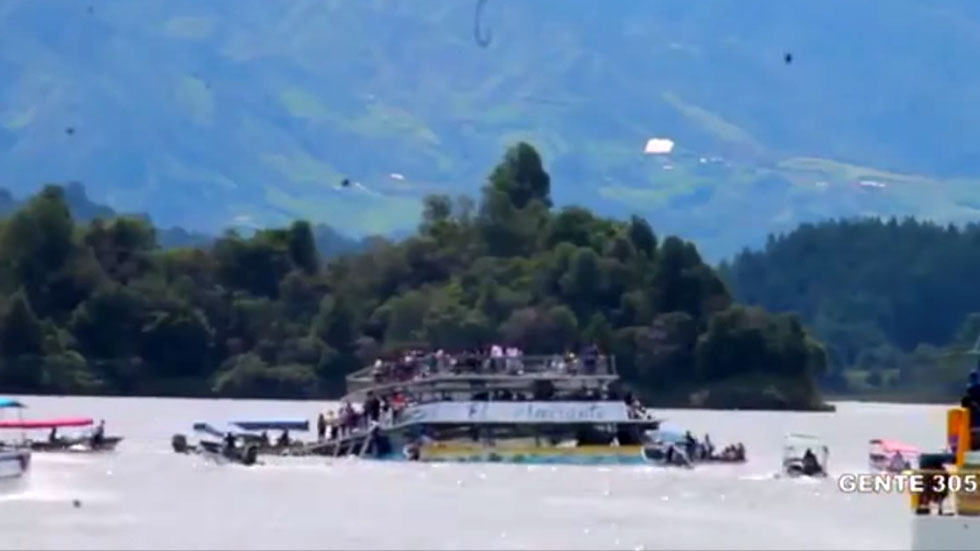 Scuba divers on Monday continued their search for bodies from a submerged boat in Colombia as authorities turned their attention to what led the tourist ferry to sink with more than 150 passengers on board, leaving at least seven people dead and nine missing.

Prosecutors were treating the wreckage site at the Guatape reservoir outside Medellin as a crime scene and looking for any clues as to whether the company that owned the boat named El Almirante was negligent.

Dramatic videos circulating on social media show the turquoise-and-yellow-trimmed party boat rocking back and forth as people crawled down from a fourth-deck roof. Survivors described hearing a loud explosion near the men’s bathroom that knocked out power a few minutes after the boat began its cruise around the giant lake. As water flooded on board, pressure built and people were sucked under by the sinking ship

The tragedy Sunday would’ve been even deadlier if not for the quick reaction of recreational boats and jet skis who rushed to the scene to pull passengers from the fast-sinking vessel.

Residents of the normally festive town laid flowers at a monument overlooking the lake as family members of those missing waited for word on their loved ones.

Jorge Barragan said his three elderly aunts had taken his daughter to Guatape from Bogota to celebrate early her 15th birthday. He said they had been planning the trip for months and it was about to wrap up but instead ended in tragedy with two of his aunts dead and one still missing.

“My daughter said there was no time to do anything,” said Barragan, who rushed to Guatape from the capital as soon as he heard news of the accident. “The floor began to shake and everything sunk.”

Complicating the search is the lack of a passenger list, so authorities have been relying on family members and survivors to report their whereabouts. On Monday Civil Defense authorities said the number of people missing was down to 9 from more than three times that amount a day earlier.

Divers are sweeping for trapped bodies around the wreckage at a depth of over 30 meters (100 feet). But the search in the frigid, algae-filled water is slow-going and reaching the crushed first floor deck is dangerous with such poor visibility.

It’s unclear what caused the boat to capsize.

Some survivors and people who witnessed the tragedy unfold from the shore said the boat appeared to be overloaded. But President Juan Manuel Santos, who traveled Sunday to Guatape to oversee search efforts, said it was sailing well below capacity. Although floating devices were on board, none of the passengers were using them or provided safety instructions before embarking.

“Nobody really knows what happened,” said Santos, adding that naval officials were brought in to carry out an investigation.

The reservoir surrounding the soaring rocky outcrop of El Peñol is a popular weekend destination a little more than an hour from Medellin. It was especially busy Sunday as Colombians celebrated a long holiday weekend, some of them taking a $5 pleasure cruise on El Almirante.

The Transportation Ministry said the company that owned the boat, and 12 others, had its certification renewed in December. Nonetheless, the government on Monday decided to suspend the company’s license.

Carlos Espinosa, an independent journalist from Guatape, said a few months ago townspeople awoke to find the El Almirante filled with water and sinking at its dock, suggesting that perhaps the vessel wasn’t ready to return to the water. Prosecutors confirmed the report but said there was no indication of structural flaws.

“What makes you angry is there are no controls by the government,” he said.