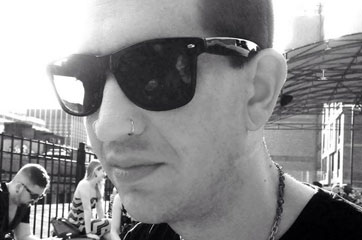 The idea of a fashionable clothing line that could also serve as protective gear did, in fact, come overnight to designer Neil Gallagher.

It was a late summer night in Bedstuy, Brooklyn, New York and Gallagher was at a local bar with friends. The speakers were pumping a new hip-hop track he hadn’t heard before that blended with the smacking of balls from the pool table in the back and the ensuing cheers and sighs.

At around midnight, Gallagher put on his light summer jacket and went outside to have a cigarette and chat up one of the bouncers, a regular part of his routine.

Standing outside under the loud train overpass, Gallagher noticed that the bouncer was wearing a hulking bulletproof vest for protection, he later learned he was shot.

“That’s when that came to me: to just have clothes that could protect you,” said the 34-year-old designer. “I wanted to find out if it was possible to integrate.”

Gallagher’s initial idea links back to when he was 19 and stabbed on the streets of west Philadelphia.

“I got the feeling, something is not right,” said Gallagher, who entered a phone booth after realizing he was being followed.

Gallagher was calling a friend for help when his throat was slashed by what later turned out to be a man suffering schizophrenia. His carotid artery damaged, he passed out on the floor from blood loss, only to be saved by a passing police officer.

“I was out of it and losing blood quickly,” said Gallagher. “I would’ve bled to death.”

Fashioned with an eye to the inner-city cultures of Medellin and New York, Miguel Romano, says Gallagher, was created with input from community leaders and activists working to stem the violence that has taken over their streets.

“I’ve always been a non-violent person,” said the designer. “But it feels great to be able to be protected.”

The “Armored Collection” consists of a number of jackets and hoodies with lightweight body armor woven into the design.

The fabric is made up of five special, laser-cut fibers, “high-tenacity microfilament yards that allows the clothing to absorb the kinetic energy of incoming projectiles,” according to the Miguelo Romano site.

Tested according to the National Institute of Justice (NIJ) standards for body armor, the technology took several months to develop.

“There was a long trial and error period,” said Puscar, co-founder of Miguelo Romano and past investor of Colombia Reports. “It was a six-month period.”

Kevlar, a popular armor brand has a blade resistance levels on gloves in a level 1 or 2, according to Kelvin.com. The cut-resistant fabric in Miguelo Romano’s highest cut resistance is a level 5.

Because of the fabrics used, explains Gallagher, Miguel Romano designs cannot be washed normally, and instead must be treated like a leather jacket.

Miguelo Romano has three collections: Armored, Urban and the El Duke collection. Elider Varela, better known as El Duke is a well-known rapper from a dangerous neighborhood called Community District 13 or Comuna 13 in Medellin. Although the area was filled with violence, El Duke rapped about peace and respect. He was murdered in that same neighborhood in 2012.

Prints for this collection was designed from another artist in the area, Medellin’s notorious graffiti artist Fabian Higuita.

With an online store set to launch in August, Miguel Romano is currently being debuted at Colombia’s biggest annual fashion event, ColombiaModa, where hundreds of designers, investors, aficionados, and international press workers gather to flaunt the latest in regional clothing innovation.

Miguel Romano opened on the same day as the festival, and the brand website is now displaying the first glimpses of the initial collection, which features test-proven blade-resistant hoodies and bulletproof jackets alongside normal viscose and cotton street wear.

Watching on from the crowd, Gallagher felt his line was well-received at ColombiaModa. “I feel like we’re getting a really good response here,” he told Colombia Reports.

Neil’s career in fashion is not fairly new. Neil Gallagher went to design school in New York and took an internship with Liz Claiborne.  The designer was subsequently hired and worked for Lucky Brand for more than six years. Miguelo Romano is his latest feat including his love for hip hop with an edgy bit of punk.

The collections under Miguelo Romano aims to be a good mixture of two very culturally rich neighborhoods Brooklyn and Medellin.  All of the clothes under the brand will be manufactured in Medellin but sold in both cities and online. Prices range but a knife-resistant hoody is $250.

Currently the men’s line only includes shirts, jackets, hoodies and suit jackets.  The brand intends to extend into more clothing.

“In the future you will be able to build your own wardrobe,” said Puscar.

“All the men will be wearing it.”

In time, Miguelo Romano hopes to expand into a brand for men and women, according to Puscar.