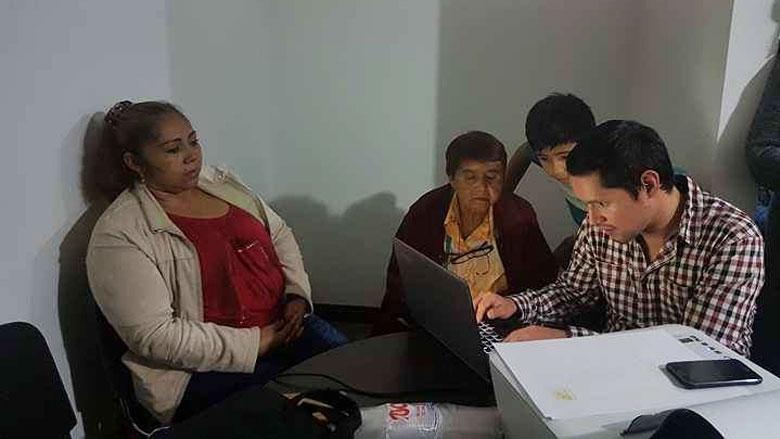 Estela looks down at her hands and her eyes easily well up with tears. She has shed so many over the last 31 years regarding the whereabouts of her daughter, it is clear that this is an emotional wound from which she may never recover. Her hardened face gives way.

“All I want to know is that she’s healthy and doing okay,”

We meet in a non-descript social room in a downtown apartment compound in Bogota where 26 other people are here for the same thing. They are here to meet one another, share their experience of giving up a child for adoption either legally or pressured, or as an adoptee to locate their parents or siblings and submit their DNA with the tireless help of a Dutch foundation called Plan Angel and try and locate their families.

“The trauma of being tricked into giving a child up for adoption is for life,” one participant says, gesticulating. “This is worse than having the fetus taken out, it’s emotional damage,” she continues.

The conversation is constant and it jumps rapidly from threats to sue the Colombian state for its complicity in what is referred to by Marcia Engel, director of Plan Angel and herself an adoptee raised in Holland as, “legalized child trafficking,” to real fear that their children may have been sold for their organs or into the sex trade.

What becomes plainly obvious is that between 1970 and in to the early 1990s there existed a thriving and lucrative industry for adoptions both internally in Colombia and for potential overseas parents who would pay up to as much as US$20 thousand for a child. Of course, these adoptive families had no idea of the illegalities taking place in Colombia. But, as these adoptees come of age and start searching for their biological families in an increasingly connected and accessible world, unpleasant truths are emerging.

Although their stories vary, one fundamental theme continues regarding the search for their loved ones: there is a lack of information on file or the files have been altered. Excuses from the orphanages include that files are destroyed after 10 years to create more space and that everything has been lost in a tragic fire. Plan Angel does not aim nor want to prosecute those guilty, just work with families.

Some babies were obtained through nurses and doctors who told mothers that their child had been stillborn and passed the infants along to a lawyer. Others were simply kidnapped or bought from impoverished women. One woman in her sixties remembers vividly that a Catholic priest insisted, that due to her condition of poverty, the child would be better off given to another family. There was the talk of French nuns being involved. Another tells a heart-breaking story of her nine-month-old child being stolen from her in a church just a short walk from where we are currently meeting.

Estela’s tale is somewhat different though, but no less heart-rending. There would have been a chance of finding her daughter had her mother, who sold the little two-year old to, “a wealthy family in Bogota,” for three thousand pesos (roughly a dollar by today’s exchange rate) had not died taking the secret with her to the grave. And one wishes that Estela’s aunt, now suffering from Alzheimer’s, also complicit in the sale, could remember more than, “the little girl cried too much.”

Engel herself knows what it is like to be separated from her biological family. At two years-old she was handed over to the police by a woman to whom Engel’s mother owed a sum of money. Effectively it was a form of blackmail which then ended up with Engel being passed on to the Colombian Child Welfare Institute (ICBF in Spanish) and then being adopted by a family in Holland.

“When I was 11, I tried to search for my biological parents. For two years every door remained closed,” said Engel. “And then I realized that I would have to pay for information. Four months later and at great personal expense I found my mother.”

For this reason, Engel is back here in Colombia. “It’s a fundamental right that every child has, that of having contact with their parents.” This is why she set up Plan Angel and in an exhausting two-week visit has been to four Colombian cities, meeting with families and handing out donated DNA kits which will be sent to Houston and then added to the Family Tree DNA center.

In 2017, the ICBF reports having 11,000 children available for adoption in Colombia and since 2010, 3,433 adoptions have been authorized. While adoption laws are more demanding and stringent today than they were in the 1980s and 1990s, there is so much to be investigated in a country partially emerging from a conflict of more than 50 years. The paper trails investigated by adoptees often lead repeatedly to the same notary offices, orphanages and indeed are signed by same lawyers.

As Maria Patricia, another mother present said: “the clinics participated in the business too, they are worse than those selling basuco (low grade cocaine paste) on the streets.”

Plan Angel has only been running since 2010 and has already helped 40 children worldwide locate their Colombian families. It has not been all plain sailing though, as on this trip a local journalist confronted her before an interview on a national radio station: “Your real family is in Holland, you have nothing here, why are you here?”