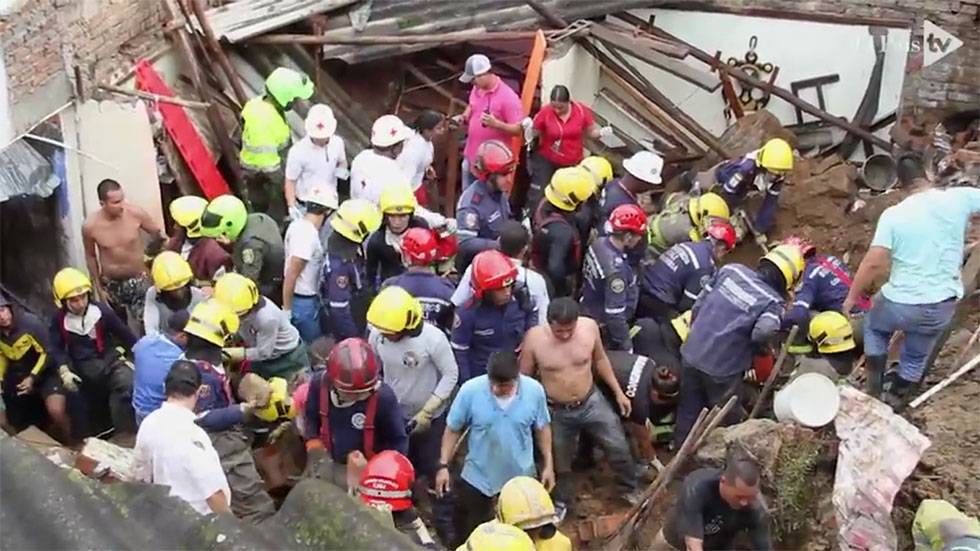 Most of those killed in the tragedy were children.

The mother of the newborn and 10-year-old died with her children as their house was destroyed by the debris.

Firefighters deployed to the scene managed to rescue five wounded, including the 63-year-old grandmother of two of the victims, and two girls.

Their arms were fractured and they suffered multiple lacerations, but the injuries do not appear life-threatening.

According to authorities, the vulnerable hillside wall holding up the hills near the neighborhood fell after heavy rains in the region.

“There was a leak of a large volume of water that saturated the soil and this precipitation caused the collapse” of a hillside wall by their house, according to Rodrigo Zamorano, secretary of Risk Management in Cali.

There were 16 other houses destroyed as two other walls fell elsewhere in the city according to a statement by the volunteer fire department in the valley.

The fire department was still assessing the safety of the rest of the houses in the area at the time of his statement.

Emergency services confirmed that “55 policemen, 65 firemen, 21 members of the Civil Defense and four officials of the Secretariat of Risk Management” were attending to the disaster.

Energy provider Emcali reported that power cuts in the area affected 26,832 people in the region, but it is working to restore power.

During the rains the Cali river also overflowed its banks, particularly affecting the area surrounding the Cali Zoo.

Although there were major disruptions to traffic in the region, no other fatalities resulting from the disaster were reported.