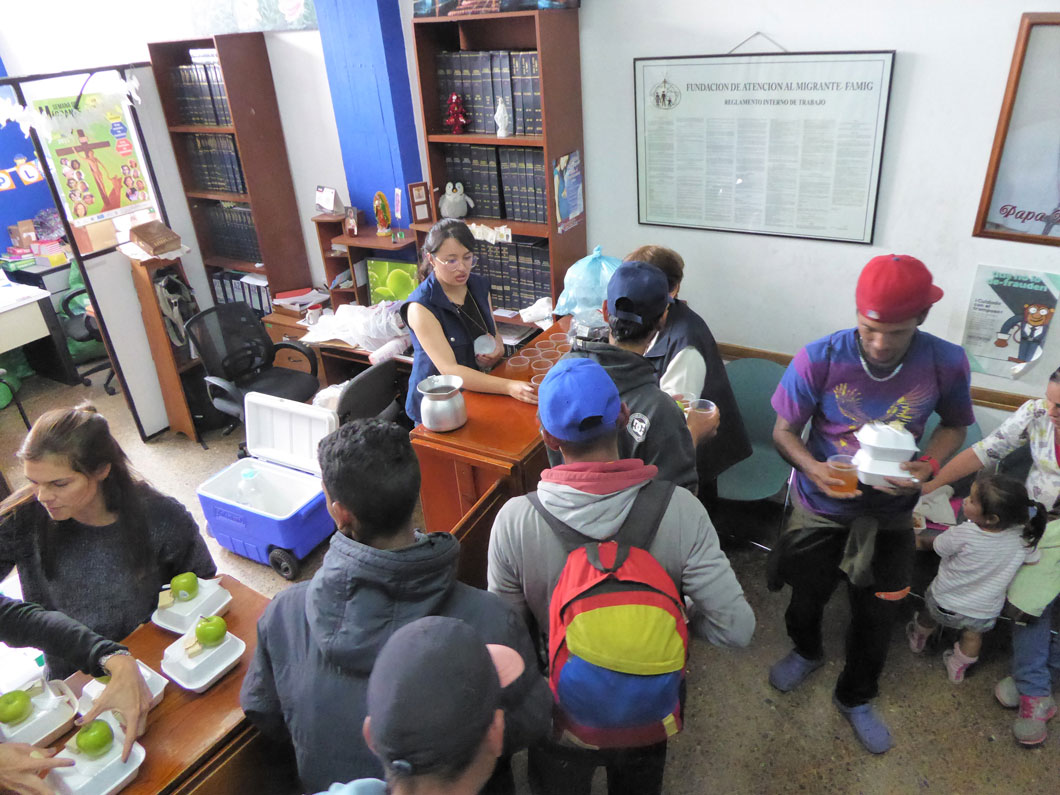 ‘It’s about restoring dignity:’ inside a shelter taking on the Venezuelan immigration crisis

She pulls money from her own purse to buy Gatorade for the Venezuelan migrant collapsed outside while others discuss whether to take him to the Red Cross post. Volunteers then help the crumpled man into the office, sit him in a chair and give him some food.

He’s one of thousands who have trekked 500 kilometers across the mountains from Cucuta, a Colombian city pressed up against the Venezuelan border. That journey is etched on the man’s taught, tanned face.

“So sorry for the interruption. We are very busy today,” explains Adriana Pinzon, the shift manager at the church-run organization that helps migrants in Colombia. 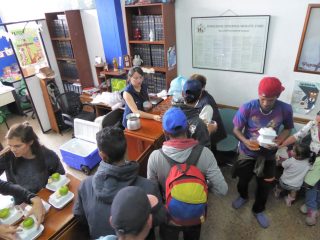 Lunch packs handed out to migrants at the Bus Terminal. Photos: Steve Hide

‘We are very busy today’

“Very busy” doesn’t even cover it.

Like many of the migrant shelters scattered around Colombia, Centro de Acogida de la Terminal de Transporte Terrestre Salitre (CATTT) is brimming with people seeking aid. Volunteers unpack trunks of food, hand out lunch packs to a group of migrants crowding the space, register new arrivals, dole out ‘one-on-one’ advice to disorientated and weary travelers, many of whom have just left their homes and lives in Venezuela.

Over 4,000 migrants flood over the Venezuelan border to Colombia every day, fleeing a collapsing economy, food and medicine shortages and violence. While many of those migrants pass on to other countries like Peru or the United States, millions have settled in Colombia, many in Bogota, Colombia’s biggest city.

“We give lunches and breakfasts to one hundred a day,” Pinzon said, “advice and orientation to another two to three hundred on average and every day we see an increase.”

The reception center is strategically located near the arrivals section of Bogota’s long-distance bus terminal, but also caters to any migrants in the area or preparing to leave the country’s capitol.

Organizations along the border and in major cities have been overwhelmed by the exodus of migrants and international experts have said that Colombia, a country which already has a massive population of internally displaced people, is ill-prepared to receive the growing wave of immigrants.

While Colombian President Ivan Duque and international leaders grapple with the crisis, Bogota’s authorities struggle and politicians spark up spiteful social media campaigns, FAMIG is among the few organizations on the group providing aid.

Not that the organizers don’t hold opinions. Lack of effective border enforcement between Colombia and Venezuela has allowed “anyone in, including criminals,” according to Pinzon. That rather porous border, she said, has lead to heightened xenophobia as “bad deeds by some are unfairly blamed on all Venezuelans.”

The aid organization does its own vetting at the bus terminal, referring the most vulnerable migrants – pregnant women and mothers with young children – to their nearby night shelter, food hall and support center, Centro de Atencion al Migrante (CAMIG).

There migrants are able to sleep and shower after their often perilous journeys through severe conditions.

“After walking weeks on the road, they appreciate the chance to have shower and change into clean clothes,” said Juan Estaban Lopez, a spokesperson for FAMIG. “It’s about restoring dignity.” 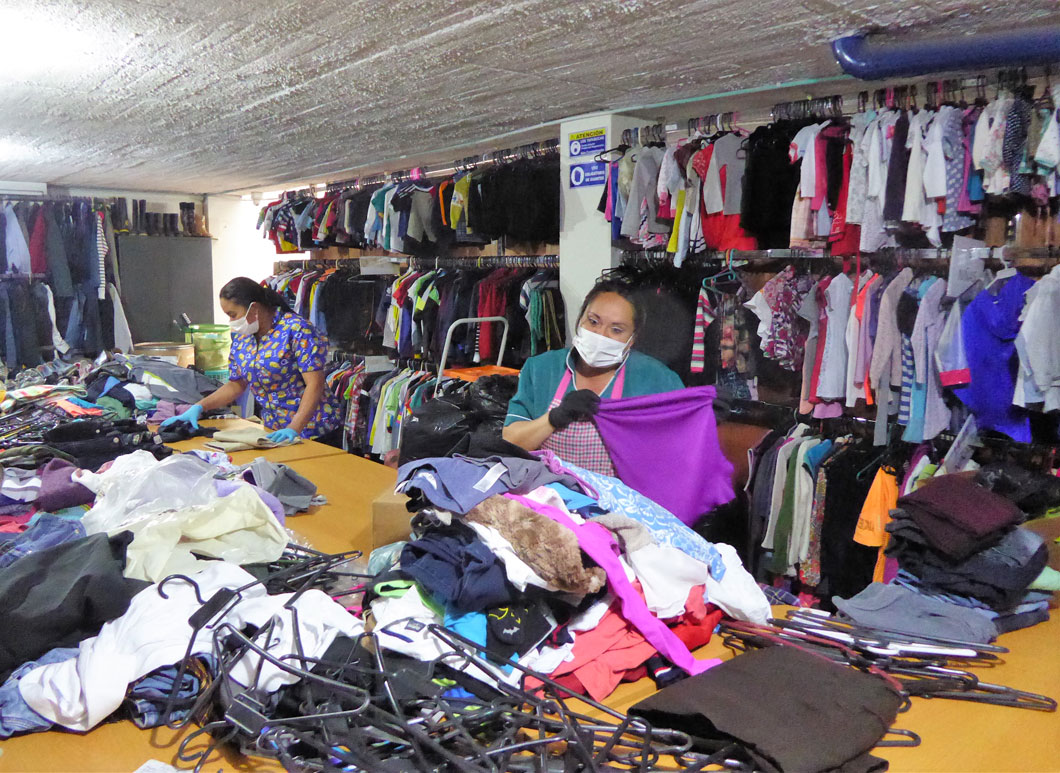 For many, there’s no going back

The CAMIG shelter gives three meals and two snacks a day to residents, and lunches to many more migrants who live in rougher conditions nearby. Migrants spend on average three nights in the facility, which is designed as a ‘hogar de paso’ – a staging post – for recently arrived migrants to take stock and plan their next moves.

For some, it is a one-night rest stop while planning to move on to Ecuador or Peru. But others stay longer as they search for work and cheap rooms to rent in Bogota or other Colombian cities. All migrants are given one-to-one support chats so the organization can take note of their needs their needs, a doctor and a nurse wait on standby, and a kid’s can pass time in a community playroom.

Depending on their needs, some are given cash subsidies for rent or bus tickets to help them move on. Others are given donated second-hand clothes and footwear.

The foundation was set up in the 1980s by the Archdioceses of Bogota as a response to Colombia’s internal displacement crisis. To date, violence in Colombia has displaced 7.5 million people. Now it’s managed by the Scalabrinianas, also known as the Missionaries of San Carlos, an Italian religious order dedicated to helping migrants.

The CAMIG center dates back to 1995 and, for years, it largely catered to those displaced communities. The last time the organization saw a peak in migrants was the high-conflict year of 2002, Lopez said. They have never experienced numbers quite like the ones they’re now seeing with the influx of Venezuelans.

More than one million Venezuelans entered Colombia in 2018: foreign ministry

Nearly half of the estimated 2.3 million Venezuelans who have fled the deteriorating situation in their country now reside in Colombia, according to the Colombian Migration agency.

“It’s keeping us all busy,” Lopez said, walking through their organization’s basement rooms. Those rooms are filled with food and supplies the organization uses to produce hundreds of meals every day and volunteers sort through bags of donated clothes.

He stops reveals a set of small conference rooms where migrants can get group trainings and one-on-one advice. That orientation is essential for migrants who often arrive poor, hungry and disorientated, with no clear idea of their future or where to go next.

“That’s our job, give food and support so they can make plans,” he said.

For a few that might mean traveling back to Venezuela, he says. For most though, there is no going back.