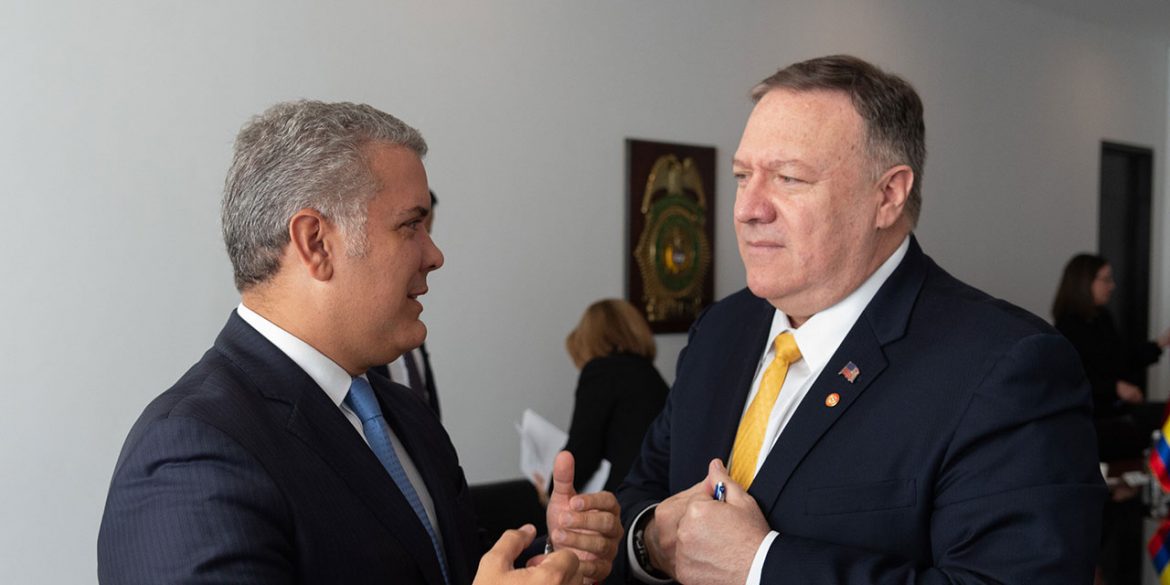 The US government has embarked on a propaganda offensive in Colombia, apparently trying to prop up President Ivan Duque, whose sagging power is endangering Washington’s interests.

The Trump administration and Duque seem to agree that the Colombian president’s troubles can be cured by a public relations campaign.

Meanwhile, little to nothing is being done by either government to address the underlying problems that are challenging Duque’s administration and have seriously weakened the United States’ most important South American ally.

The US is singing its own praises while Colombia is overwhelmed with corruption. This could have disastrous consequences for both the US and Colombia.

“Operation Save Duque,” so to speak, began earlier this month with the US praising Duque’s attempts to renew the aerial spraying of coca that is fiercely opposed and has been a depressing disaster.

This week, Secretary of State Mike Pompeo attended a ceremony in Bogota to honor 22 police cadets killed in a terrorist attack last year, claiming “those losses, that suffering, was not in vain.”

The United Nations reported last week over 100 murders of activists since the Bogota bombing; other estimates surpass 200. Maybe Pompeo should have gone to one of their graves, too, at least for appearance’ sake.

Meanwhile, the US Drug Enforcement Agency claims that Hezbollah worked in Colombia with the Oficina de Envigado criminal organization, which has been tied to Duque’s party and political patron.

The cherry on the public relations pie was Pompeo and Duque’s joint appearance in Bogota Monday, where the Secretary of State  called Colombia “a champion  of freedom in this hemisphere”.

In the coming days, the military will be hammering home the point with 75 US paratroopers floating down to the Colombian countryside from US and Colombian aircraft, a made-for-TV demonstration of the intimate relationship between the two countries’ military forces.

The paratrooper drop won’t do anything about Colombia’s real security issues. The joint US-Colombian military exercise is “designed to simulate the securing of an airfield,” according to a US military statement. Enemy airfields are rare in Colombia’s troubled rural areas.

“Let’s give him some Monopoly money”

Also last week, with US ambassador Philip Goldberg at his side, Duque announced the US “will contribute to Colombia close to $5 billion in the coming years to carry out integral intervention works in the countryside.”

Not exactly. The US government won’t be contributing a dime. The billions of dollars refer to how much the US Development Finance Corporation (DFC) might support in private sector loans and investments with loan guarantees and other risk-reducing inducements.

It’s unclear what kind of projects would be supported, because DFC’s headquarters in Washington, DC did not respond to requests for clarification.

But DFC’s predecessor organizations have been involved in 10 Colombian projects since 2014. For example:

Those sorts of project may perhaps make a difference by 2025, but not in 2020, and are unlikely to help Colombian farmers as Duque implied.

DFC’s mission statement requires it to “advance American foreign policy.” It is “embedded in the US foreign policy and national security architecture,” said the US Center for Strategic and International Studies (CSIS), a Washington think tank.

A main objective of DFC is to counter increasing Chinese investment in Latin America, and especially to increase the “visibility” of US aid vis-à-vis Chinese aid, a CSIS report noted.

DFC’s seven-man board of directors includes Pompeo (along with Secretary of Commerce Wilbur Ross), ensuring its projects will align with US self-defined “national interest.”

The US has offered little help to prevent the impending collapse of Colombia’s justice system; curb the wave of assassinations of human rights defenders and community leaders; combat rampant corruption in the military; and fix the failing counternarcotics efforts.

Washington has a “see no evil” view of Colombia, ignoring 21 social leaders murdered in the first 19 days of 2020 and corruption at the top disclosed by media on a weekly basis.

If the US government wants to stabilize its loyal South American ally and prevent a further drift toward becoming a failed state again, ‘Operation Save Duque’ should instead be empowering Duque to rid his inner circle of criminal infiltrators.