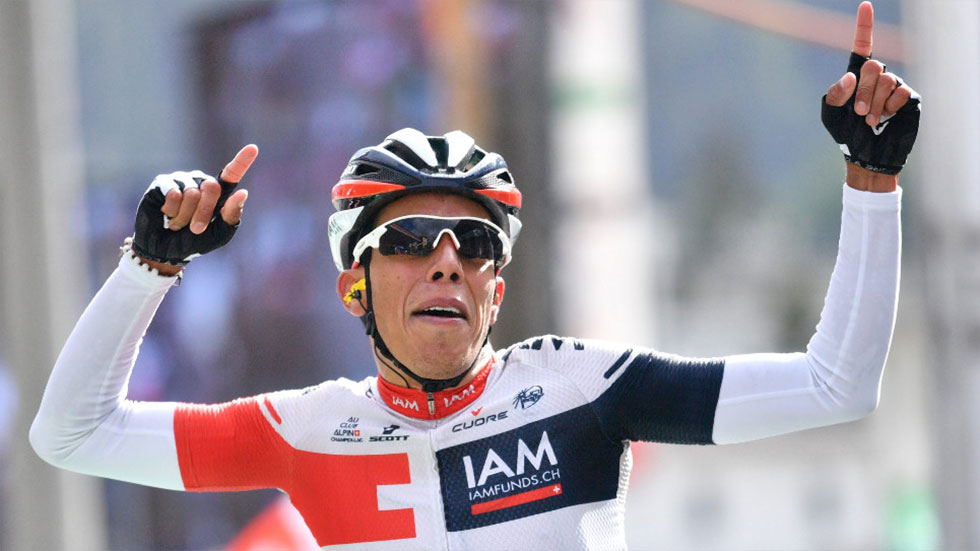 Jarlinson Pantano had just gotten off the podium after his stage victory award in the Tour de France on Sunday when he was handed an audio connection to Colombia President Juan Manuel Santos.

It was a day filled with dramatic moments for the rider for the small IAM team, which announced in May that it will fold at the end of this season after failing to find a second sponsor.

Part of an early breakaway in the grueling 15th stage through the Jura Mountains, Pantano dropped behind Polish climber Rafal Majka on the final climb, only to catch up again when Majka made a mistake in the descent and nearly rode off the road.

In only his second season in the top tier of pro cycling, Pantano finished fourth overall in the Tour de Suisse last month after winning the last stage.

Last season, the climber from Cali finished 19th overall in his first Tour.

Now he has a win in cycling’s biggest event.

“Last year was about learning to ride as a professional,” Pantano said through a translator. “Now I’m putting to use all that I’ve learned.”

There have been thousands of Colombian fans lining the road during the Tour, although most of them came to see two-time Tour runner-up Nairo Quintana, who sits fourth overall, 2:59 behind race leader Chris Froome.

“I know that I’m not the only Colombian climber in the peloton,” Pantano said. “There are a lot of them. … Nairo is really strong and he’s still capable of winning.”

Pantano, who is 27th overall and more than 40 minutes behind Froome, made headlines earlier in the race when he borrowed an umbrella from a fan during a hailstorm in Andorra.

He’s looking for a new team for next season.

“I have a lot of proposals but we’ll talk about that in August,” Pantano said.

“We knew this stage was perfect for him,” Carlstrom said. “We just said to him that he needs to keep on fighting. We knew Majka would probably go away on the climb, so (we said) just keep him in sight. Then in the downhill he will make it back. He did exactly that. It was perfect.”