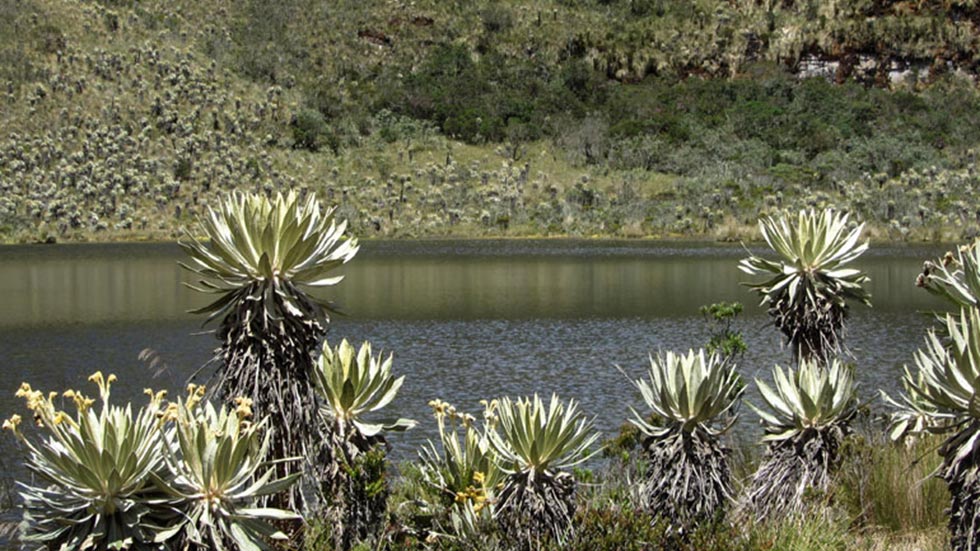 A hike up to paradise: Colombia’s Iguaque Park

The native Muiscas of the Cundinamarca–Boyaca Plateau consider their home to be the origin of all life. After a long hike to the top of the mountain and a quick nap, it’s easy to see why. The Laguna de Iguaque, situated in the Paramo de Iguaque in the Iguaque National Park, is among the calmest places in the world.

To arrive at the park when it opens (7:30AM-8AM), it’s important to wake up early. After a fairly bumpy car ride up a mountain next to the beautiful colonial town of Villa de Leyva, Boyaca, one arrives to the entrance of the national park to an elevation just slightly higher than the capital Bogota (8,850 feet). After paying a fee to hike up to the lagoon (depending on whether you are a foreigner, student, or Colombian national), the trek begins.

Little stations are dotted along the path to the lagoon that describe the distance until the lagoon, as well as the local flora and fauna (since the elevation changes regularly). The stations also recount Muisca legends regarding the lagoon. The first of these stations is a small house situated a short hike up the mountain, but don’t rest yet! the most difficult part of the hike is yet to come.

After the small house, it’s necessary to navigate a dense, narrow path through beautiful Andean forests. The higher one climbs, the more the vegetation changes going through a moss-covered-tree and fern phase, then into a pine phase, a short tree phase, a shrub phase – and from there can be reached the paramo at 11,000 feet above sea level.

Although the view is beautiful, the next part of the hike is difficult, and rather dangerous. It is not exactly a wall in the strictest sense, but a very steep climb up to the higher altitudes is necessary to reach the lagoon.

This phase of the hike is colloquially referred to as “la pared,” or the wall. After scaling the “wall,”  a narrow path with a very steep hill on one side, and a mountain on the other, creates the feeling of walking on air and provides the greatest scenery of the hike.

The shrubs are replaced by beautiful “furry” frailejones; plants that look like palm trees that are a bit off, and give way to an incredible view. The view (on a clear day) allows you to see layers upon layers of mountains, several villages, and many farms. Hiking up on a cloudy day will allow fog to permeate the view, which is beautiful in a different, almost haunting sense.

After a while on the side of the steep hill, the lagoon comes into view, surrounded by frailejones at an altitude of 12,450 feet. The water, clean enough to drink straight from the lagoon, provides a convenient opportunity to fill your water bottle.

A quick nap is suggested, and it is a nice way to relax among the silence of the mountains (assuming of course, your group is the only one there). After exploring the lagoon a bit, you must head straight down the mountain, so you don’t end up hiking down at night.

The hike down is difficult, as one has to traverse back down the same difficult terrain. The nap that was taken earlier should come in handy, as the hike down is fraught with roots, rocks, mud puddles, and plants waiting to trip you.

Relief is sudden when you reach the entrance to the park and you can remember all the incredible scenery that you saw on your trip.

Lake Iguaque holds a special place in native Colombian mythology. According to the Muiscas — a sedentary indigenous group that lived in the area today constituting southern Santander, Boyaca, and Cundinamarca — Lake Iguaque is the origin of life on Earth.

According to the legend, the goddess Bachue arose from the lake with a child in her arms. Bachue would wait for her child to grow up, until he was old enough to procreate. From there, as the legend states, humanity came into existence. When she grew old, she went back into the lake with her husband/son in the form of two snakes (the sign of wisdom). The stone head of a snake can be observed on the hike up the mountain, formed by the power of Bachue.

Muisca names for towns in the native language Chibcha are still present across the region — several examples include the capital Bogota, towns like Facatativa, Chia, Chiquinquira, Choconta, Zipaquira, Subachoque, Sutamarchan, Sogamoso, among many others.

Paramos – terminology and what to bring

Paramos are areas in Colombia, Venezuela, and northern Ecuador where the altitude is too high to support trees, and instead grow frailejones, small bushes, grasses, and are the aquifers of Colombia. Bogota’s freshwater originates in paramos, as they also act as a sort of sponge to contain water.

Frailejones (Espeletia grandiflora, the primary species of frailejon), from the same family as daisies (Asteraceae), dot the landscape like extremely slow-growing weeds. Frailejones are common in all paramo climates in Colombia and Venezuela, and are covered in small “hairs” to protect the plant from the few instances they see the sun (high altitudes are dangerous), as well as the cold of the night.

Don’t let Colombia’s position next to the Equator fool you — paramos are quite chilly because of their high altitude, have a micro-climate that promotes drizzle, and are typically covered in clouds.