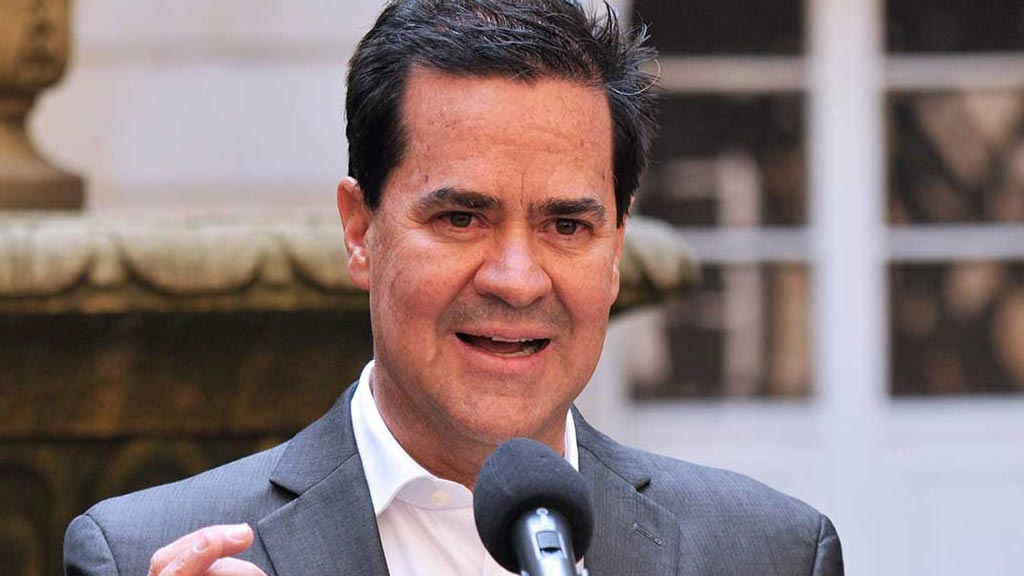 During these both administrations, he has played a key role in getting both the ELN and FARC rebel groups to the negotiations table.

Frank Pearl was born in 1962 in Colombia’s capital to Bogota, to a Canadian father, John Pearl and a Colombian mother, Maria Gonzalez.

Pearl has a degree in Economics and a Masters in Finance and Financial Law as a graduate of the Andes University.

Much of his career was developed in the private sector, where he held important positions among which are counted the associate consultant for McKinsey & Co and chairman of Valores Bavaria, a position he held until 2006.

Parallel to his work in the private sector, Pearl was devoted to social and community issues; in 2002 he was co-founder and chairman of the Board of the citizens’ movement “NO MORE!”, which promoted the peaceful protest in favor of peace.

He has taught at several universities including the University of the Andes, aswell as teaching courses in the former Soviet Union regarding the transition from communism to capitalism.

He began his public career during the presidency of Alvaro Uribe 2006-2010, serving as the 1st High Presidential Adviser for the Social and Economic Reintegration of People and Groups Up in Arms.

He was also entrusted with the office of High Commissioner for Peace from 5 February 2006 until his resignation on 31 July 2010.

In these positions he was as clear supporter of the processes of justice and peace and played an instrumental role in the release of Pablo Emilio Moncayo, who was kidnapped by the FARC.

Pearl served as the 1st Minister of Environment and Sustainable Development between September 2011 and September 2012 under the administration of Juan Manuel Santos.

As Minister brought forward the National Plan for Adaptation to Climate Change which changed the compensation scheme for environmental damage.

He also proposed the National Biodiversity Policy which established standard watershed management and resolution determining  that you can not make any mining activity in almost all the Amazon territory until an environmental management of the region was completed.

He left the Ministry on September 3, 2012 to address full dialogues with Colombia’s largest left-wing rebel group, the FARC.

Frank Pearl has worked extensively as a peace negotiator for the Colombian government.

Pearl, under the instruction of then then President Alvaro Uribe tried to initiate a peace process with the FARC again in 2008, according to President Juan Manuel Santos, who was Uribe’s defense minister until 2009.

He was one of the plenipotentiaries who signed the Framework Agreement with the Marxist rebels the FARC in 2012 that brought them into full negotiations with the government.

Simultaneously in 2012, he headed a Colombian government delegation that engaged in exploratory talks with the nations second left-wing rebel group, the ELN.

When the latter group agreed to formal peace talks in March 2016, Santos appointed Pearl chief negotiator in the talks.