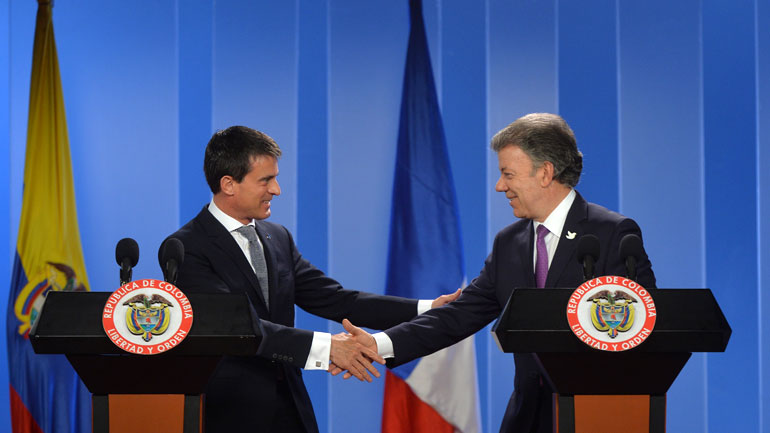 France’s prime minister was forced to cut his official visit to Colombia short on Friday after an attack on a factory in the south of the European country.

“Islamist terrorism has struck France once again,” lamented the French Prime Minister Manuel Valls as he interrupted his official visit to return to France , which is now on high alert after a man tried to ignite a gas factory and the beheaded body of another man were found in the southeastern city of Lyon.

Prime Minister Manuel Valls had arrived in Colombia on Wednesday for an official visit in support of ongoing peace talks in the South American country and to strengthen ties between the two nations.

Valls visited Bogota on Thursday to reiterate his country’s support for the ongoing peace process that is working to end the internal conflict that has lasted over five decades.

In a speech at the opening of the Franco-Colombian Economic Forum in Bogota he past support French businesses have given to the Colombian Association for Reintegration (ACR), the government agency that deals with the rehabilitation of armed rebels and highlighted ongoing investment opportunities.

This support will become increasingly important if the Colombian government and FARC rebel group reach peace talks and more than 20,000 FARC members will be reintegrating and in need of jobs.

Before the tragic incident in southern France, which suffered a double terrorist attack in January when radical Islamist gunmen in Paris killed 11 people and hijacked a supermarket, Valls met with Colombian President Juan Manuel Santos and signed numerous cooperation agreements.

In discussion of the country’s support in the current peace process, Santos told press how the country intends to use France’s “considerable legal background” to enable the parties to find “a middle ground that will allow us the maximum of justice but also allows us peace “.

They also discussed plans surrounding Santos’ interest in creating a Colombian version of the French Gendarmerie, a military police force in charge of public security in rural communities. If the peace talks with the FARC are successful, Santos aims to use a similar force to ensure security in rural areas now mainly controlled by the FARC and at risk of becoming the battleground for turf wars as drug traffickers might try to take over the FARC’s lucrative drug business after the guerrillas demobilize.

Colombia looks at France for ideas on rural development, education and police