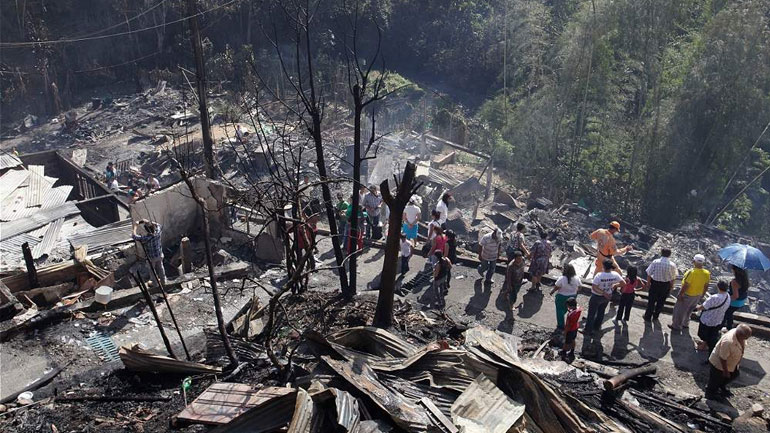 A fire in western central Colombia which broke out on Thursday consumed 46 houses and left over 186 devastated families without their possessions.

Locals initially attempted to battle the flames alone until about 10.30AM when they alerted the fire department. By 12.30pm the situation was mostly brought under control but many people had seen their homes destroyed.

Mayor of the ravaged town Calarca, Jesus Maria Zuluaga, confirmed that 46 houses had been destroyed and that over 180 families are staying in the local sports center while the town hall gathers resources and food.

The captain of the Calarca fire department revealed that they have not confirmed the cause of the fire which spread throughout the town wreaking havoc. However, the mayor told local reporters that it was possibly started by a wood stove that was left on and the flames spread easily due to the current dry climate and winds.

Resident of the affected neighborhood, John Jairo Soto, who was not at home at the time and was called to come to the scene told local news, “we arrived at the neighborhood and we found a disaster, I lost everything.”

Images show locals trying to save their belongings from the flames, carrying TVs and mattresses into the street before they could be consumed by the rapidly spreading fire. Many families did not have time and could only watch all their belongings burn.

Local news reported that some petty criminals took advantage of the situation, looting belongings in the chaos.

The governor of the Quindio department said, “we are accompanying the community” and explained that they are awaiting the official report while trying to find temporary accommodation for the affected families.

Calarca Government Secretary Mario Augusto Castaño told Caracol news that as of yet there are no reported victims.

The news of this fire comes during the worst drought in Colombia’s history with very hot, dry weather brought by the pacific El Niño weather phenomenon causing forest fires and drying out rivers.