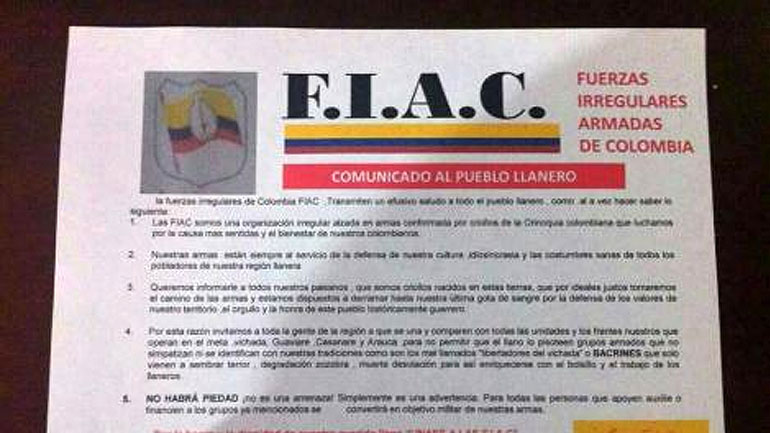 After the demobilization of the Colombia’s largest guerrilla group the FARC it is possible that individual members or fronts of the organization split from the leadership and form their own neo-guerrilla groups, such as the FIAC.

The FIAC is an anti-BaCrim guerrilla group that announced its creation in Guaviare in southern central Colombia in September 2014, declaring war on neo-paramilitary groups like The Libertadores de Vichada and the Bloque Meta.

The group is possibly linked to the FARC; one of its alleged leaders, “Mao,” is reportedly the cousin of slain FARC 16th Front commander “El Negro Acacio.”

Mao was arrested in Bogota in March this year. His successor is unknown.

After the arrest of Mao, the group continued its activity, mainly around the coca-growing areas in Meta and Guaviare. However, reports have surged from the more western city of Ibague where the group reportedly has been trying to recruit new members.

The FIAC’s aversion of neo-paramilitary organizations is based on historical events which could be set to repeat themselves in the event of a FARC demobilization.

After peace talks with the government of then president Belisario Betacur the FARC agreed to a ceasefire and in 1985 formed a political party called the Patriotic Union (UP). Paramilitaries then began a violent extermination campaign, killing thousands of UP politicians and supporters over the next decade.

After the demobilization of the paramilitary organization AUC between 2003 and 2006, some paramilitaries formed illegal armed groups, known as BaCrim, and these present a current threat to the safety of demobilized guerrillas.

The FARC have said they will not sign a peace deal unless the threat of paramilitaries is eradicated.

The evidence that the FIAC have decided to defend themselves and the Colombian people from paramilitary groups indicates the possibility that similar groups could also form out of a fear that the government will not fulfill their promises to eradicate paramilitaries.

Nevertheless, while the group claims to be at war with neo-paramilitary groups and one of its founders is a blood relative of a top FARC commander, Colombia’s human rights office has claimed that some the group‟s leaders were close to “Cuchillo,” a slain paramilitary warlord and founder of ERPAC, out of which both the Bloque Meta and Libertadores de Vichada were born.

Additionally, locals from Guaviare have reported no violent confrontations between the FIAC and their neo-paramilitary counterparts.

Pragmatic collaboration between guerrillas and neo-paramilitaries – once arch enemies – has become common after the demobilization of the AUC between 2003 and 2006, especially in areas where the drug trade needs to avert the attention of authorities.

This makes the integration of former paramilitary fighters in drug-trafficking neo-guerrilla groups possible. Former guerrillas who refuse to demobilize would also be able to join neo-paramilitary drug trafficking organizations.