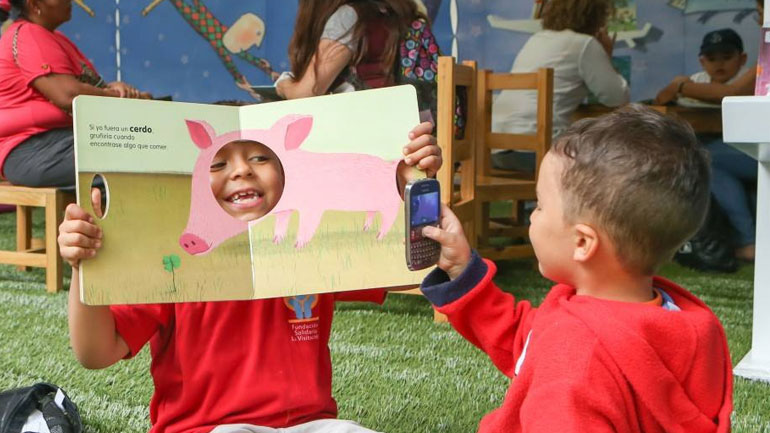 Festival of Books and Culture blossoms in Medellin, Colombia

The Festival of Books and Culture in Medellin is now the fourth largest book festival in all of Latin America.

This month marks the ninth year of the lively festival organized by Medellin town council which opened on September 11 and will close on September 20.

It takes place in cultural locations across the city including the botanic gardens, the planetarium and the interactive science museum, Parque Explora.

The festivities spill over into surrounding spaces with the aim of expanding the circumference of cultural activities in the area where there has been a great urban transformation in the last years.

“Leer la vida (read life)” is the slogan of this year’s festival, which includes workshops for children, an “adopt an author” scheme for schools across the city, bookshops representing numerous publishers and the universities of Medellin and talks by 320 well known guests, 60 of whom are international.

Over the course of the festival, 120 books will be launched.

The impressive natural environment of the botanical gardens allows those attending the festival to relax and enjoy the green spaces, setting this festival apart from traditional book fairs.

The gardens, the food stands and the many musical acts that punctuate the festival create a special party atmosphere for celebrating books and the arts. This year the festival even has its own soundtrack, “Viva la Fiesta (Long Live the Festival),” written by Medellin singer-songwriter Pala.

Free entrance to this vibrant festival, and to all three of Medellin’s annual book events, has allowed inclusive access over the years to knowledge, literature and culture, regardless of social class.

Through the chosen theme of life, the festival’s organizers wanted to explore memory. In particular Medellin’s collective memory of the 50-year-long civil conflict in which thousands of Colombians were killed.

In collaboration with the Museo Casa de la Memoria, which honors the memory of the victims of the armed conflict, the festival provides a space in which participants can share their personal stories. The idea is to create a platform where Medellin can show it is capable of rebuilding itself, and that children and adults from all social classes can come to terms with the reality of the conflict.

Photographs and films on the subject of the conflict will be shown and 8,000 publications composed of accessible investigations and reports will be distributed, all with the aim of preserving the memory of Colombia, Medellin and its citizens in words.