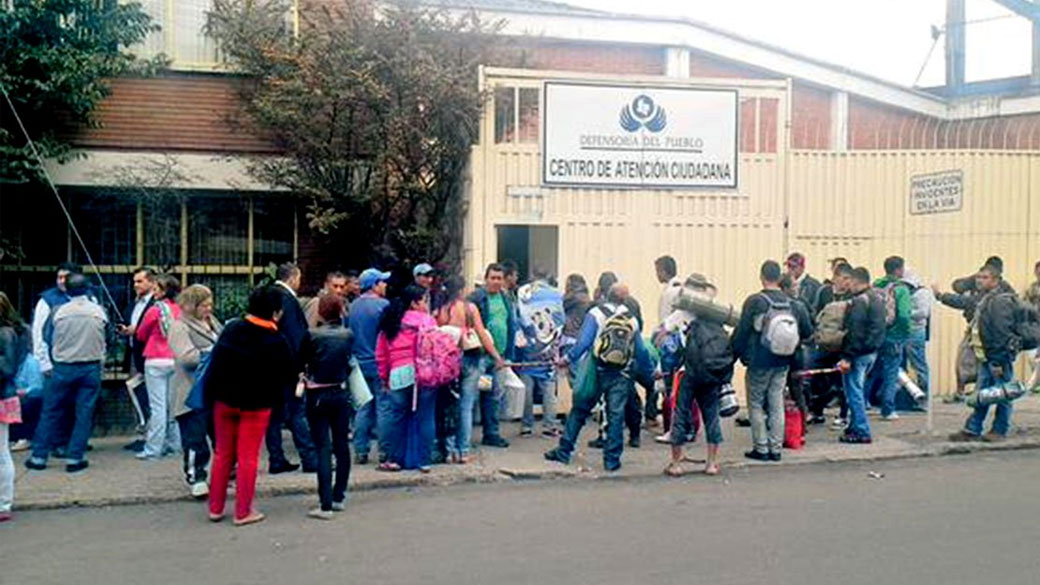 Hundreds of farmers held a peaceful demonstration outside the ombudsman’s office in Bogota Thursday to protest the government’s inaction on enforcing rural workers’ rights legislation passed in 2014.

Some 280 to 300 members of the Campesino Association of Catatumbo (ASCAMCAT), a farmers’ rights organization from the Norte de Santander province, blocked the entrance of governmental Ombudsman Jorge Armando Otalora Gomez’ office yesterday, demanding justice for disenfranchised workers across the nation.

“We demand that you 1. meet the commitments made when we agreed to lift the strike that we held for 53 days in 2013; 2. to reactivate the Catutumbo negotiation table [on Friday] here in Bogota, 3. comply with Law 160 and constitute the ZRC at the site of the Hacarí-San Calixto-Teorama,” said the ASCAMCAT in a statement on their website directed at the president.

The protests come in response to a major national agrarian strike from August 2013 over free trade policies leading to unfavorable international prices, debt, and high fertilizer and transport costs. According to farmers, this left the rural population unemployed and hungry. The strike lasted several weeks, consisting of not only farmers, but also truck drivers, health workers, miners, and students throughout the country.

Two weeks after the 2013 strikes were declared, they turned violent, leading to 2 deaths and some 250 arrests. Some of the detained were sentenced to up to 12 years in prison.

Moreover, in an attempt to downplay the uprising, President Juan Manuel Santos famously denied the movement’s mere existence. “The so-called national agrarian strike does not exist,” Santos said in 2013. Santos’ comment only escalated the conflict.

After ongoing talks between the protesting agricultural sector and the government, Colombian President Juan Manuel Santos finally sanctioned a new law almost exactly one year after the protests first began that was to provide financing to farmers and “reactivate” Colombia’s agricultural sector.

Colombia’s final answer to a year of farmer protests

Santos has yet to follow through on this legislation and his inaction, along with Gomez’ inability to fight for the reversal of sentencing to those wrongfully detained in 2013, have been the genesis of this most recent response.

The ASCAMCAT demonstrators declared that they will not stand down until Santos agrees to see them. They have been sleeping in Renaissance park since yesterday.

“If they won’t agree to meet us, we’re going to have a second phase of escalated action. A third point, if we’re not heard, we’ll initiate another strike,” said ASCAMAT spokesperson Olga Quintero.