A pamphlet circulating on the outskirts of Medellin and on social networking is claiming the FARC plans to return to Colombia’s second largest city. Authorities and the rebels assume the threat is a hoax.

The pamphlet reads “we are currently working on our struggle to reach the city of Medellin again,” while displaying the FARC’s logo.

However,  the total absence of any political rhetoric traditionally used by the FARC has cast doubts over the legitimacy of the pamphlet.

Luis Fernando Quijano, director of the NGO Corpades, told Caracol radio that it was likely to be a disruptive tactic of locally active criminal organizations such as Los Urabeños and La Oficina de Envigado. 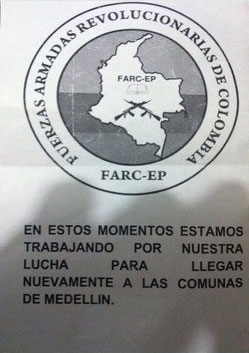 Ivan Dario Sanchez, Medellin’s security secretary, confirmed to El Colombiano that he had “confidence in the authorities to investigate where this pamphlet came from.”

In a response, the FARC peace talks delegation in Cuba told Colombia Reports that they have “no concrete information” over the alleged plans to begin an offensive around Medellin.

“It’s obviously hardly logical to announce your presence in a specific area, this is the same in the city as in the jungle. It’s probably a hoax,” said Tanja Nijmeijer, one of the members of the rebels’ peace team.

Leftist rebels, including local militias loyal to the FARC, were removed from Medellin during a number of military operations in the beginning of the century. The operations effectively solidified the control of right-wing paramilitary groups and allied militias in the city.