One of Colombia’s favorite sons, Gabriel Garcia Marquez, famously wrote that five Colombians in a room invariably turns into a party. What happens, then, when you get five thousand or more together? The answer: some of the wackiest and most boisterous festivals in the world.

These are our favorites. 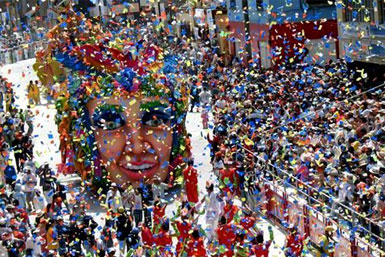 The Cali Fair is a banquet of debauchery. Not only is it the biggest Salsa festival on the planet but also features the best bullfighters from Spain and South America, the best Paso Fino horses in Colombia, hundreds of concerts, parades, parties, beauty pageants, gastronomy expos, cultural exhibitions, sideshows and more.

The first fair took place in 1957 and began solely as a bull fighting fair. Apparently the first celebration lasted a whole month. Soon, other attractions were added to the fair. Horse riding parades, shows by the best national and international salsa orchestras, parades of antique and classic cars, gastronomic sampling in street-side tascas, and beauty pageants made their way into the fair. These days over 2 million locals and countless more tourists put on their dancing shoes, loosen up their hips and explode into a week-long salsa marathon.

A feature of the Cali Fair is the tascas – small, picturesque, temporary restaurants built from wood. They offer a wide range of Colombian and international food, and operate as a sort of gastronomical fair for the revelers.

Where: San Antero
When: Easter Weekend

One of the great truths in life is that there is nothing more festive than dressing up donkeys and putting make-up on them. Dressed up as Colombian heroes or world-famous celebrities it really doesn’t matter as long as the donkey is in a ridiculous outfit with a colorful painted face.

It is obvious, then, why the locals of the little Caribbean coastal town of San Antero decided to get rid of the boring Easter procession at the start of the 20th century and make it a celebration of donkeys.

Originally, the only donkey involved was carrying an effigy of Judas Iscariot to be burned as punishment for betraying Jesus. Soon enough everyone forgot about the effigy and decided to dress up the donkey instead. The Donkey Festival as we know it was born.

The main event of the five day festival is a donkey parade where each owner marches past with their donkey dressed in a particular costume. The costumes are designed by the owners and are usually representations of Colombian or world famous personalities or celebrities. The donkeys with the best costumes are crowned as the King and Queen of the festival. In addition to this parade there are also other activities to cover the five days of fiesta: concerts, street theater, handicraft exhibitions and a wide variety of local food.

This carnival might raise a few eyebrows in other parts of the world but Colombia is a special place with a unique heritage. This celebration perfectly expresses all the cultural influences that have been in play in the region for centuries: rituals and cultural expressions of indigenous, Spanish, and African cultures.

On these days the people spread the joy of the festival by painting and coloring each other with anything they get their hands on – paint, polish, grease, talc, chalk and flour. The ‘antifaz’, a local mask to protect the face is sold widely in the markets.

The Black and White Grand Parade is the main attraction but the pre-carnival activities that start one week before are also worth seeing. The Day of Water is when people of all ages come out on the streets and playfully celebrate this day by getting drenched with water. Following this, begins the Little Carnival when the kids showcase their creativity and culture. The Castaneda Family Parade is also a highlight and a prelude to the main event.

Where: Barranquilla
When: Weekend before Ash Wednesday

“Who lives it, is who enjoys it.” This is the motto that encompasses the vibrant and rollicking party that is the Barranquilla Carnival.

Barranquilla’s Carnival is Colombia’s most important folklore celebration and is the biggest carnival in the world behind The Rio de Janeiro’s Carnival. The carnival has traditions that date back to the 19th century.

While the Carnival season begins long before the actual celebration, there are only four main days in which Carnival is officially celebrated—the Saturday, Sunday, Monday, and Tuesday, before Ash Wednesday. The most popular activities are the Battle of the Flowers, the Grand Parade, The 84th Street Parade and The Funeral of Joselito Carnaval.

UNESCO honored the carnival of Barranquilla by declaring it a World Masterpiece of the Oral and Intangible Heritage of Humanity. The carnival, described as a thousand theater pieces in just one stage, is the most genuine expression of the Colombian people with a blend of musical rhythms like cumbia, mapale, garabato and son del negro.

Where: Cali
When: Early August

This romping stomping music festival with roots from the Pacific Coast is a riot of color, food, music and dancing. One hundred bands perform at the festival over the course of a week on a rotating stage. Once a band has finished their set the stage spins around and the next band is ready to go. This tag team ensures that the festival maintains its high-octane atmosphere. They perform with an array of instruments but the congos, bongos, maracas and marimbas form the heart of the irrepressible rhythmic beat that hails from the Pacific Coast.

This 18 year old festival has all the attitude and energy its age might suggest. The swarming crowd comes to dance under the hot August night in Cali. Armed with white kerchiefs the crowds dance in unison to the beat of the Pacific Coast. It is a sweaty, throbbing explosion of dance and music and keeps the crowds coming back for more every year.

In August, Medellin — also known as the “City of Eternal Spring” — blooms in all its splendor. Balconies, terraces, gardens, and billboards get flooded with flowers to mark the beginning of the famous fair.

The week-long schedule of events features the world famous parade of silleteros. Silleteros is the term used for the farmers who make beautiful flower arrangements on a silleta which is a basket-like contraption for carrying flowers on a person’s back.

The silletas are made from wood with over twenty-five kinds of flowers normally used to manufacture a silleta, although some contain as much as seventy. The main flowers used are: pinocchios, lilies, carnations, agapanthas, sunflowers, bridal veil, gladioli, chrysanthemums, roses, and orchids. Every year, men women, and children proudly carry on their backs a depiction in flowers of their life histories, land and culture.

The week-long celebration is not just a flower parade though. It has over 140 cultural, traditional and modern events. The special attractions include an orchestra festival, an old and classic car parade, a women’s talent contest, music festivals, a fireworks show to begin and end the festival and the intriguingly titled ¨the national championship of noise on wheels¨.

Where: Ibague
When: End of June

In the heart of Colombia lies Ibague, the ¨Musical City of Colombia¨. The city hosts one of the most renowned events in Colombia, the annual Ibague Folk Festival. The city turns on the festival magic with the plazas and parks revamped into incredible musical stages where people dance to the beat of traditional Andean rhythms: sanjuaneros, bambucos, and pasillos.

This folk festival was created in 1959 to foster the city’s traditional and local values and highlight its musical character. It is a unique opportunity to showcase the region’s talent and listen to groups best recognized in the field of Colombian music, dance, and folklore.

During St John’s parade the performing groups show themselves off in their entire splendor. The public enjoys the dances while coming in close contact with the spirit of folklore. The parade of floats carrying the beauty pageant candidates is a crowd favorite. 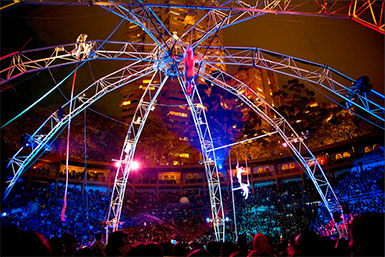 Where: Bogota
When: Every two years in April

The Ibero-American Theater of Bogota is a major cultural event in Colombia and one of the largest performing arts festivals in the world. It brings together the most important theater companies from five different continents. For seventeen days, the city becomes the setting for colorful parades; Bogota dresses up for the party and transforms into a genuine Theater City.

The festival offers the most complete panorama of performing arts. Aside from classical works, it is a showcase of dance, circus, music, puppetry, pantomime, performance art, and even concerts, many of which take place simultaneously in Bogota’s halls and streets.

Additionally, there are specialized workshops and lectures by world maestros of the scenic art. The festival has also fostered a boom in artistic development in Colombia.

In its sixteen years, the Ibero-American Theater Festival of Bogota has welcomed 520 companies from 50 countries. Each version of the festival brings together about 2,000,000 spectators in 450 performances in theater halls and close to 150 street performances. 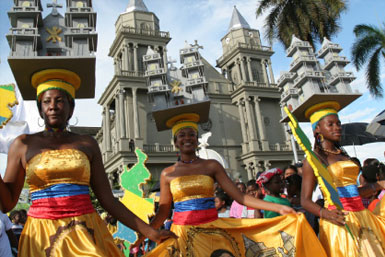 Where: Quibdo
When: 3 September – 5 Ocotober

This 32-day rip-roaring party in the western Colombian city of Quibdo is a bedlam of processions, flag ceremonies, vibrant costumes, floats, fireworks, aguardiente and dancing in the street. The festivities culminate in a parade in honor of their patron saint Saint Francis of Assissi.

The San Pacho festival is one of Colombia’s most unique events; held on the streets of Quibdo the festival incorporates Catholic as well as African traditions. This centuries old event was recently named on UNESCO’s “Intangible Cultural Heritages” list.

On September 20 parades and costumed groups take over the Franciscan quarters of the city. The statue of Saint Francis is taken on a tour all over the city. True carnival elements are added to the sacred character of the feast.

Following the opening procession on the 20th each barrio has a turn for a parade each day. Every night, there’s a party in the barrio that had a parade that day. It is in this manner that the party moves around town and keeps going for over a month. Bring truckloads of aguardiente and all your stamina for this one. 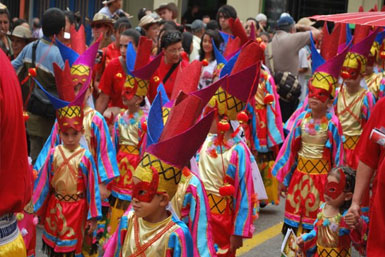 Carnival of the Devil

Where: Riosucio
When: January 2-10, every two years on odd years

The Carnival of the Devil has an intriguing history.

Between the 17th and the 19th centuries, two rival settlements were involved in a bitter dispute: the wealthier Spanish-descended community and the indigenous Indian population. After a century of confrontations the two rival groups agreed to share their territories and the town of Riosucio was born in 1819. Riosucio’s unusual lay-out, with the two main churches just one block apart in the center of town, symbolizes the unification of the two former enemies.

Despite the unification tensions persisted between the two communities, so in 1847 a carnival of unification took place, with the Devil as the symbol of this unification.

The Riosucio Devil is devoid of evil significance. He is ¨a spirit that inspires many things like the preparation of the ears for music and of the body for dancing. The spirit that inspires writers and poets to create verses and songs. He lives in the kind hearts of each inhabitant of Riosucio to make the carnival possible.¨

The carnival is a great celebratory feast where reality is transformed through the magic of dances, costumes, words, poetry, and music. The parties start early and finish late, just the way the Devil would want it.