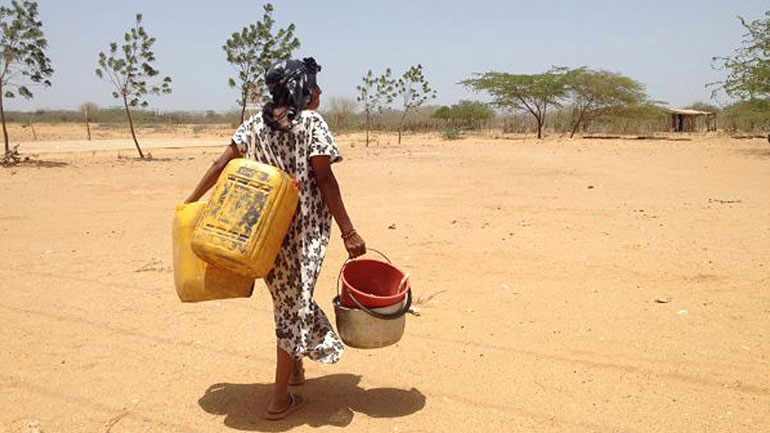 Nine of Colombia’s 32 provinces are in a state of emergency due to extreme drought, high temperatures and forest fires caused by El Niño that threatens to continue disrupting weather until March.

The last three months of the year historically bring the highest amount and frequency of rainfall in the country that commonly has two rainy seasons and two dry seasons.

This year, however, instead of heavy storms and overflowing rivers, Colombia will largely look up to empty skies.

According to the national meteorological institute IDEAM, water deficits can exceed 60% in the coming months.

The little and sporadic rain that does fall must be collected and properly managed, especially in areas of wetlands in watersheds, in preparation for the worsening conditions, which are expected to become dire in January when the dry season begins.

According to the US International Research Institute for Climate and Society (IRI), which has been working with IDEAM in Colombia, experts are monitoring the development of one of the largest El Niño events of the last 50 years across the globe.

IDEAM data shows that the last time Colombia reached the “strong phenomenon” category was 1998. Consequentially, the IRI states in its report that “notably, [this is] the largest [El Niño] since the 1997-98 event that shocked global food, water, health, energy and disaster-response systems.”

If that is any signal, chaos, death and poverty are bound to be seen in coming months as conditions continue to worsen.

Huila, a department in west-central Colombia, is now experiencing extreme effects of the drought. The north of Huila is essentially without water.

According to a press release from Huila, measures have been implemented regarding the restriction and limitation of the use of water concessions, “to give priority to human consumption.”

Unfortunately this means a devastating interruption of agricultural production.

The most affected municipalities are Aipe, Villavieja and Baraya, where there is no water to feed the animals and irrigate crops. The community is digging holes in search of liquid.

Local authorities are instructing farmers not to grow certain crops to preserve water as the streams and rivers are at critical lows.

15,103 hectares have been affected by fires in Huila, causing losses in excess of 94 billion pesos for the agricultural sector.

According to the Secretary of Agriculture of Huila, Camilo Ospina Martinez, livestock, coffee, corn and rice, have been the sectors most affected by the drought.

Huge economic losses have been and will continue to be incurred by families in these areas.

In Tolima, at least 150 billion pesos are needed to support those affected by El Niño. 25,000 families have been affected in the region so far, according to the secretary of Agricultural Development of the department, Elkin Oliveros.

The agricultural producers in the region of Risaralda face threats to their livelihood as one of their most important crops, flowers, falls fatal to extreme conditions, with production already reduced by 60%. High temperatures that have been generated on behalf of El Niño and falling ash from the volcano Nevado del Ruiz are notoriously affecting flower farms in this part of the country.

Meanwhile, in Caldas and other areas in the coffee industry, El Niño has greatly affected coffee crops.

Colombia’s coffee is both world-renowned and an integral part of the national economy. The manager of the National Coffee Growers Federation, Roberto Velez Vallejo, said that next week the effects on coffee growing will be discussed with the national government in order to seek support for this sector.

The effects of El Niño represent a part of the larger issue of climate change that many scientists believe will lead to heightened future natural disasters.

This year, Colombia is but one of many countries facing extreme conditions from the 2015 El Niño.

On the global scale, the IRI and the World Meteorological Organization (WMO) will convene the El Niño 2015 Summit from November 17-18 in New York to advance international research and agendas in the face of the current natural disaster. The summit will bring together governments, scientists, economists, humanitarian agencies, development professionals and the media to enhance climate resilience.