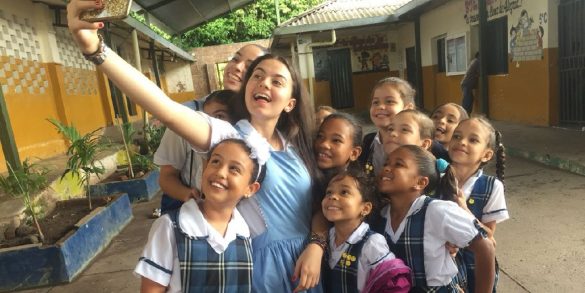 Colombia spends more on education than most developed countries, to okay results. Despite boosts in test scores, academic performance is well below average. Education in Colombia is accessible, but disparities in region and income result in a system that favors wealthy urbanites.

Access to primary education is not universal in Colombia. 93% of Colombian children aged 3 to 5 attend school, compared to the Latin America average of 94%. While this number is high, it hides disparities in region and income.

Location plays a role. To illustrate, enrollment rates for 3 to 5 year-olds range from 80% or less in rural areas to over 90% in urban areas. Put simply, most children in rural Colombia attend school, but towns and cities are much better-served.

Household income also plays a role. Fewer poor children attend primary school, in contrast to their wealthier peers. However, income disparities have reduced, and enrollment rates are not as strikingly different as they were in 2002.

Most (83%) Colombian children aged 11 to 12 start secondary school. Currently, we see girls outnumber boys by 5%. This trend has stayed fairly consistent through time. However, we notice disparities as we sort by region and income.

Coverage in rural areas has leapt by 30% since 2001; this is good progress. However, in this graph, we see a 14% gap in enrollment between rural and urban areas – this is a wide rift, compared to primary enrollment figures.

Secondary school enrolment has increased significantly. In 2001, enrolment dipped among the poorest students, but then recovered. In 2016, a 5% gap came between each socioeconomic group; the smallest ever recorded.

However, there is a strong link between household income and university attendance. Although enrollment has increased, 61% of the richest Colombians aged 18-23 go to university, compared to the poorest 25% of Colombians of the same age.

This map illustrates the spread of university students across the country. There is a major concentration of students in the District Capital and Central region, followed by the Atlantic, Pacific and Oriental regions.

The Program for International Student Assessment (PISA) is a worldwide test administered every three years. It provides a ‘temperature reading’ of how 15-year-old pupils score in three subjects: mathematics, science and literacy. Colombia’s 15-year-olds have consistently improved in all subjects since 2006, although scoring far below the OECD average.

Public services, including education, make up a large percentage (15%) of Colombia’s gross domestic product (GDP). With a GDP estimated to be around US $314 billion, Colombia’s government spends 4.4% of this on education (as of 2017). This is higher than most upper-middle income countries; in short, a very big slice of a very big pie.

In conclusion, access to education has expanded in Colombia, across all levels. However, basing this judgement on enrollment rates alone is misleading. There are major disparities in region and income.

For example, universities are attended mainly by the wealthy; likewise, large urban centers are better served than rural provinces.

Although some significant disparities exist, what can be said is that all over the country, education is more accessible now than ever before. This is evidenced not only by rising enrollment rates and education spending, but also by attainment, which continues to improve, generation upon generation.