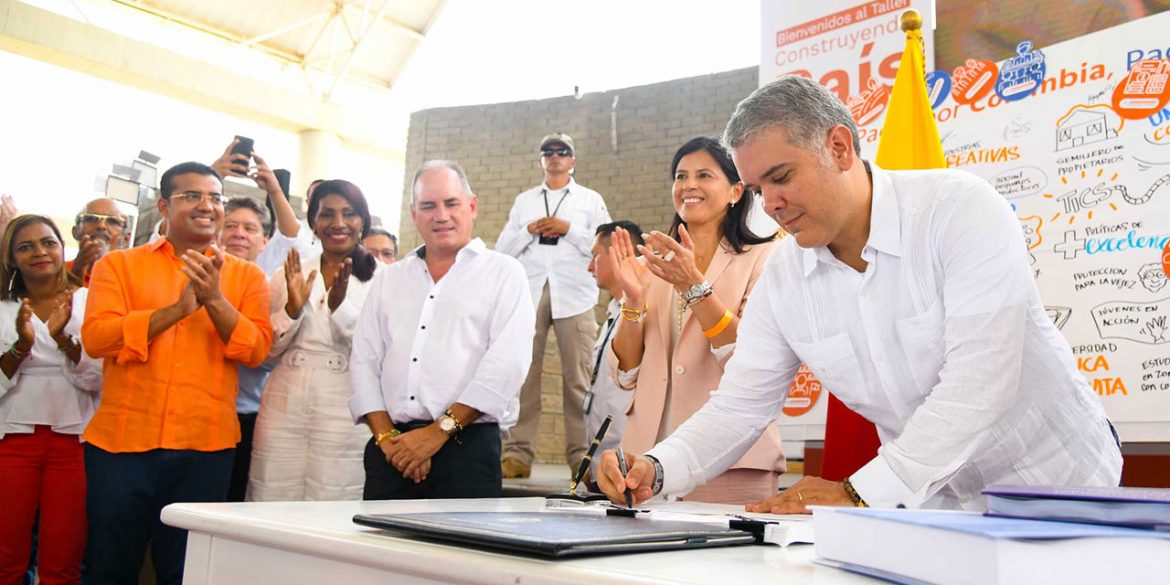 Duque’s development plan: a power-grab that excludes and exploits Colombia’s most vulnerable

Colombia’s new road map for development exposes the most vulnerable to government plans for aggressive exploitation of land and resources, ignoring inequality and the concerns of at-risk communities.

Nearly $3 billion (a trillion Colombian pesos) investment has now been approved by Congress for the National Development Plan (PND) dubbed a “Pact for Colombia: Pact for Equity.”

President Ivan Duque’s government has taken the development plan as an opportunity to tinker with power-structures, bringing more spending than ever back under their control despite concerns that radical changes are being made without democratic oversight.

Colombia’s environment has been left without a shield against aggressive extraction of natural resources, even paving the way for fracking. Colombia’s gaping gender inequality is left unaddressed and the conservative Christian right wing have even had their agenda promoted, with LGBTQ+ voices being silenced.

The National Development Plan is the road map for economic advance of Colombia for the next four years. It has now passed through Congress twice, and received Presidential Sanction.

5.3% of this budget will come from state companies, 0.4% from international co-operation deals, 33.1% from private investment, and the rest from territorial entities and royalties.

Major doubts remain about the level of consultation in relation to the PND: though there have been conversations and meetings in the regions and online, key communities have been ignored. The PND has also been passed with little legal analysis as to whether or not it conflicts with others laws: this is a pattern with recent government, according to the Director of Economic Studies, Luis Fernando Mejia.

The previous PND had only 137 articles, while Duque’s has 349, with more than 600 pages. Though the government argues that this is due to the complex structural issues being addressed, Mejia argued that this allows Congress to push through projects and laws as part of the PND, without proper debate of those articles. Some may even be unconstitutional.

One of the great fears around the PND is that it constitutes an erosion of sovereignty for the territories, constituting a recentralization of power to Bogota.

The PND gives the government power of decision over all projects funded by the Regional Development Fund, and 60% of the Regional Compensation Fund. This amounts to power over 7.7 trillion pesos ($2 billion). This new power was gained by eliminating the capacities of the Collegiate Organs of Administration and Decision (OCAD), returning their powers to central government.

The PND would also reduce the power of the National Department of Planning, which is considered one of the most measured and apolitical government bodies, moving its powers to the Treasury, a much more political body. This could sow the seeds of a crisis of both quality and efficiency in public spending.

Checks and balances are even further undermined with the generally vague wording of the PND, which provides the government with special powers to destroy, reform, or create any entity of administrative government.

The articles providing this right do not specify entities or reasons required, providing the government with a blank check for reform and restructure of administrative government over the next four years.

The plan does little to reduce to the risks associated with development: it fails to pave the way to sustainable development, neglecting to protect territorial autonomy and land rights, or how the illegal mining and agricultural projects will be addressed in coming years.

Deforestation goals have been a major source of controversy: 800,000 hectares of forest will be cut in the next four years. This goal was aimed at reducing the growth of deforestation, rather than actually reducing it. The goal violates the commitments of the Paris Accords.

At the end of April, a petition with 90,000 signatures was handed to Congress protesting this goal, but fell on deaf ears.

Mining is addressed in the PND but, according to Razon Publica, the articles are overly focused on the day-to-day running of the industry, and do little to tackle the extractivist culture which prevails – even deepening it by not addressing it at all and allowing the continuing violation of international commitments on the environment, and paving the way for fracking in Colombia.

Fossil fuels to storm the countryside

The chapter ‘countryside with success’ confirms Colombia’s priorities as single-crop farms and export of raw materials, with a focus on private investment and large scale agro-industry, neglecting small-scale farmers unless they sell their land, or form a part of the chain of production and sale envisaged with large scale players. It discards the commitments of the Havana peace deals.

Those who live in the countryside, rural farmers, indigenous people and people of African descent are not part of Duque’s gamble for development.

Four articles directly affect pensions. A new system will help those without full time employment, official employment, or employment at minimum wage, to save and contribute to a pension fund.

David Cuervo, director de Wealth Mercer Colombia, thinks this will be positive, as it will recognize the 50% of Colombia’s workforce who work in the informal sector, and provide some protection.

The pensions union, Asofondo, opposes the article, arguing that it is a system of “quasi-protection”, which invests conservatively and does not yield enough profits for a pension fund.

Ivan Jaramillo, Investigator at the Labor Observatory of the Rosary University, predicts it will instead incentivize informal labor, rather than bringing more Colombians official employment and the consequent protections and benefits.

The PND neglects to acknowledge, let alone tackle, Colombia’s critical food shortages: acute hunger among children has actually risen in the last five years, and weight problems have doubled – often due to the  structural availability of fresh or healthy foods.

The peace deals signed with the FARC guerrilla group in 2016 included a commitment to create a progressive system which would ensure the right to nutrition for Colombian citizens. The system outlined in the peace deal was based on an increase of food production and the support of well-being based on access to land, infrastructure, drinkable water, and technical assistance for agriculture.

The PND ignores this commitment, and puts in place simply a conditional subsidy system.

Gender equality is essentially untouched by the PND, reduced to a ‘political vision’ of equality with no allocated budget: not a single peso has been dedicated to a problem which pervades Colombia’s economy as well as social structures.

The word ‘women’ only appears two times in the document!

The onus for improvement, rather than being a responsibility of the State, has been put in the hands of the private sector, with pressure and benefits for equality schemes and flexible work conditions which supposedly benefit women.

Diversity and a ‘homosexual dicatorship’

LGBTQ+ provision removed under pressure from ‘Colombia Libres’, the evangelical party led by Senator John Milton Rodriguez. In his petition to have the chapter removed, Rodriguez claimed the government was promoting a “homosexual dictatorship.”

The original document contained a chapter “Diversity for Equity”, and did not contain budget requirements or concrete actions, but simply a historically significant recognition and inclusion of the LGBTQI population in a national development plan.

Nonetheless, references to the LGBTQI population of Colombia were eliminated from sections on health as well as on culture and discrimination. The trans community were also excluded, with references to the expression “gender identity” removed from the document.

The article on diversity was originally about specific needs of LGBT, but those references have now been replaced with references to indigenous populations, afrocolombian communities, palenqueras, disabled people, and, most tellingly, religious groups.

With the intention of boosting the textile industry, a 37% tax on textiles will be levied, putting the onus on the consumer to bail out the business: Colombians will have to pay 25% more for clothing. There are claims this sort of taxation is unconstitutional, and could spark a case in the Constitutional Court.

The company Electricaribe, which provides power to the Caribbean coast will also be bailed out at the cost of the consumer.