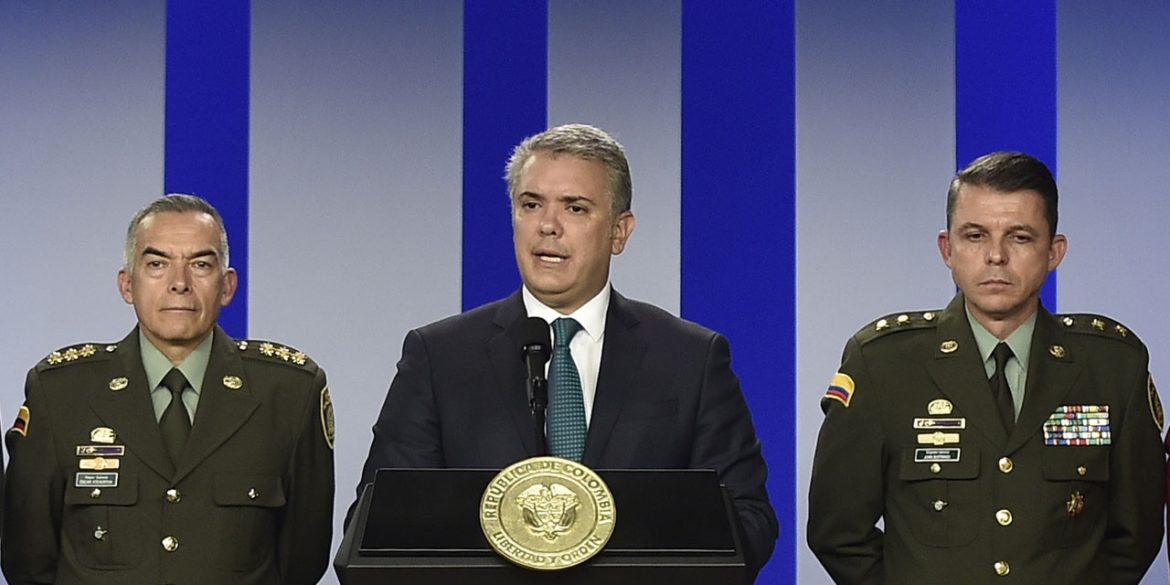 Duque is not just a threat to peace in Colombia, but democracy itself

President Ivan Duque’s attempts to protect his political allies from war crimes investigations has pushed him to undermine not just Colombia’s peace process, but the foundations of its democracy.

Duque refused to sign off on the statutory law that defines the powers of the country’s war crimes tribunal, JEP. The transitional justice court seeks to end Colombia’s 98% impunity rate for crimes against humanity, and provide justice to the 8.5 million victims of more than half a century of armed conflict in the country.

The president has unleashed a constitutional crisis by demanding that the law is returned to Congress, despite it already having been approved by Congress and the Constitutional Court during a two-year process.

Inspector General Fernando Carrillo called it an “unnecessary confrontation” and an “inopportune and useless” debate. He called Duque’s objections “inadmissible,” given that the law has passed out of his competency.

Congress does NOT have the competency to pronounce over these objections – that were already resolved by the Constitutional Court.”

With no legal basis or procedure, Duque’s objections simply constitute a political declaration: an attack on the peace process and a declaration of alignment and alliance with war criminals and the far right that has benefited from the militarization of Colombia and the polarization of its peoples.

Branches of the state are now in dispute and the country’s democratic order is now at risk, destroying crucial consensus around JEP and the peace process, and deepening social and political divisions.

We express our deep concern about attempts to seriously damage the implementation of the agreement, structure and functioning of the JEP, as well as the system designed to honor the rights of victims.”

Duque’s objections are an affront to constitutional process, and an attempt to undermine checks and balances on his presidential power, as well as the independence of transitional justice – an element that is crucial if Colombia wants to consolidate peace.

The law only needed official presidential sanction — often a formality — which had now been delayed. Duque’s objections were expected as his patrons and allies, former President Alvaro Uribe and controversial Prosecutor Nestor Humberto Martinez, had made their intentions to undermine the tribunal clear, with their objections overlapping significantly with those of the president.

Top members of the military and many of the president’s far-right allies have been implicated in war crimes and could go to prison or be extradited. These men have a lot to gain from a derailing of the peace process, and erode the legitimacy and consensus around JEP.

Most notable among those implicated in war crimes is former-President and Congressman Alvaro Uribe, often understood to be the puppeteer of Duque’s pseudo-democratic theater of politics. Uribe is linked to four proven war crimes relating to paramilitary massacres and attacks on civilians and is investigated for tampering witnesses who have linked him to the formation of one of the most blood-thirsty illegal armed groups in the history of the conflict.

Duque’s image as a moderate who maintains a degree independence from Uribe has taken a blow.”

The International Criminal Court (ICC) had approved JEP and urged the sanctioning of the law last month. JEP President Patricia Linares announced that the tribunal will “continue work in full despite the President’s objections.”

With a dangerous mixture of political strategy and disregard for limits on his power, Duque is endangering the peace process and muddying the waters of his own democracy. But it won’t be enough to conceal the catastrophe ahead if he continues to pander war criminals at the cost of Colombia’s hard-won peace.