Colombia’s “.co” domain has become more than just a country code; websites worldwide are now taking part in the brand. 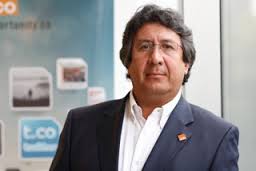 The eponymous .CO Internet SAS  is the company now selling the country’s domain to users across the world, disrupting a largely untouched marketplace and hoping to change the shape of the internet.

Eduardo Santoyo, vice president and general manager of .CO in Colombia, sat down with Colombia Reports to lay out exactly what “.co” is, and what .CO Internet SAS does.

“.co was for Colombia in the beginning, but it’s not just for Colombia. It’s for the world,” said Santoya of how a country code evolved into a leading market competitor with just a shift in focus.

What is the difference between .co and .com?

Domain names, the suffixes at the end of web addresses, include such prominent examples as .com, .org, .gov, .edu, and .net, which can be accessed by various entities, depending on the nature of their activity.

In the 1980s, it was decided that countries would have domain names as well, that the respective governments could control and allot as they saw fit. The country code for the United States, for example — .us — is used mostly by small municipal governments, whereas other country codes are attached to all domestic web addresses.

Ultimately, it is up to the government of the country to decide what to do with the domain name. Some have largely ignored it, relying on .com and others, some have restricted it so much that only specific organizations and citizens of a country can use the domain.

But, “there are no defined restrictions,” said Santoyo, “there is autonomy for each country.” Theoretically, someone living in Denmark could use the Venezuelan country code — .ve — for their Danish website.

Rather than keep its country code available only to Colombians and Colombian companies, Colombia decided to take its domain global, and actively compete in the burgeoning online marketplace.

“The government led this internal dialogue in Colombia with forums, [reports], discussions. And in the end they were in agreement,” explained the domain expert. “The government then offered the contract to the most qualified company, and .CO competed for this contract and ultimately won.”

Formed in 2008, .CO Internet SAS beat out over 80 companies for the rights to sell .co to the world, and brings an aggressive vision for the future of the Colombian domain, and the company that bears its name.

The Future of .CO

“Finally the system of domain names has become a market — but before now the enormous market was there. For 25 years .com has been the king of this market,” Santoyo said.

Santoyo and his team, however, are not deterred by .com’s near monopoly in this space up until this point, explaining that .co is poised to take a larger share of the market from its more recognized competitor.

“We do not believe that .co is less than .com. If anything, it’s better. Because it’s shorter,” the general manager said.

The project started within Colombia itself. In 2009, when .CO Internet SAS was just getting started, for each .co domain in Colombia, there were two .com domains.

While the Colombian domestic market is increasingly important, with broader access to internet and a top-down push for greater tech innovation, .CO has its eyes set on the larger international marketplace.

“There are no limits: Medellin, Tokyo, San Francisco. This is a competitive market, and you have to fight to survive,” said Santoyo.

“This is still small, but we are growing,” said Santoyo adding that .CO offers support for the domain name after registration.

“For many [domains] everything stops once you’ve bought the domain. We will make ours better.”

While the company will not give special preference to Colombian businesses, .CO is proudly a Colombian company and wishes to share that with the world.

“The business is totally Colombian. It is a domain from Colombia, for the world. We are proud.”