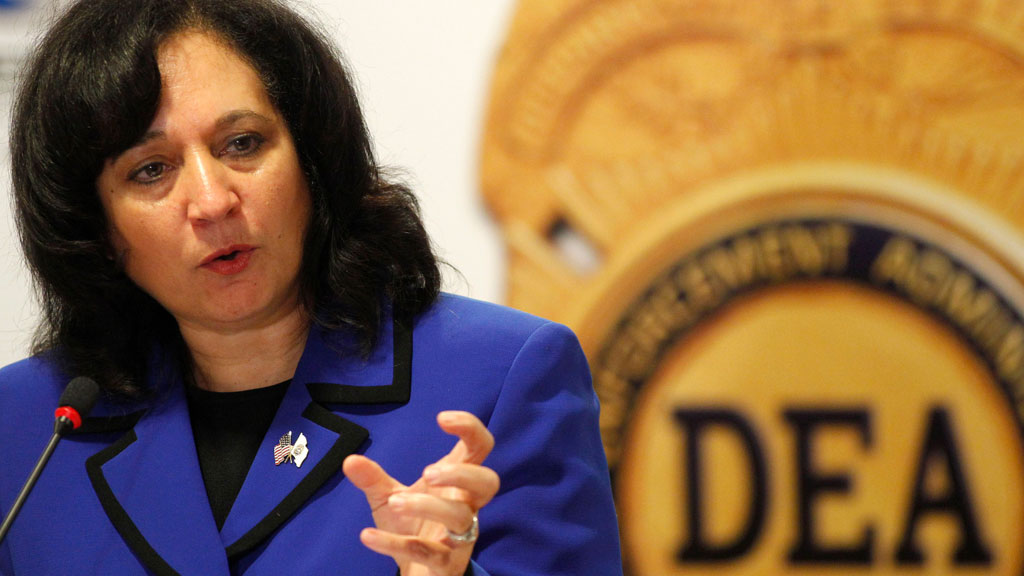 The embattled head of the US Drug Enforcement Administration said Tuesday that she plans to retire next month, a move that followed her acknowledgment to Congress last week that some agents had participated in sex parties with prostitutes in Colombia, some paid by drug cartels.

Michele Leonhart, a career drug agent who has led the agency since 2007 and the second woman to hold the job, will leave the agency in mid-May, Attorney General Eric Holder said in a statement announcing her retirement.

Leonhart had faced mounting pressure to resign from members of Congress who questioned her competence in the wake of a scathing government watchdog report that detailed the sex party allegations.

“Michele has led this distinguished agency with honor, and I have been proud to call her my partner in the work of safeguarding our national security and protecting our citizens from crime, exploitation and abuse,” Holder said, crediting her with helping dismantle violent drug trafficking organizations.

Leonhart had been widely criticized for her response to the critical report on her agency, and a group of lawmakers said in a statement that she was “woefully unable to change” the agency’s culture.

Following a disastrous appearance before the House Oversight Committee last week, a majority of the committee said they had lost confidence in her and said she “lacks the authority and will to make the tough decisions required to hold those accountable who compromise national security and bring disgrace to their positions.”

The Justice Department report that jeopardized Leonhart’s job recounted allegations that drug agents attended sex parties with prostitutes in a foreign country. The DEA said the incidents happened in Colombia.

The no-confidence statement was signed by 13 House Democrats and nine Republicans, including Chairman Jason Chaffetz of Utah and the committee’s top Democrat. Chaffetz went a step further, calling for Leonhart to resign or be fired. On Tuesday, the two lawmakers said they welcomed Leonhart’s departure, calling it appropriate and an opportunity for new leadership.

White House spokesman Josh Earnest reiterated earlier Tuesday that the Obama administration had “concerns about the material that was presented in the (inspector general) report that raised legitimate and serious questions about the conduct of some DEA officers.” He said Obama “maintains a very high standard for anybody who serves in his administration, particularly when it comes to law enforcement officials.”

Leonhart canceled an appearance to receive an award Tuesday from sponsors of the Border Security Expo, a trade show in Phoenix for government contractors. Doug Coleman, the DEA’s special agent in charge in Phoenix, accepted on her behalf.

Robert Bonner, a former DEA administrator and Customs and Border Protection commissioner, told the luncheon audience that Leonhart was being unfairly blamed for agents’ misconduct.

“Sadly, what we’re witnessing in Washington is gotcha politics in action,” he said.

Leonhart has previously been the target of online petitions calling for her ouster after she distanced herself from the administration’s stance on legalized marijuana, seen as a hands-off approach that lets states legalize marijuana so long as it is state-regulated. Marijuana remains illegal under federal law and is classified by the DEA as a Schedule 1 drug, along with drugs such as heroin and peyote.

Leonhart also declined to fully endorse sentencing reform efforts supported by the Justice Department, and the agency has been criticized by privacy advocates for its use of a sweeping database of phone calls made from the United States to multiple foreign countries. The agency acknowledged that database in a court filing involving a man accused of conspiring to illegally export goods and technology to Iran, but said it was no longer in use.

During Leonhart’s tenure the agency was responsible for a variety of notable criminal cases, including assisting in the 2014 capture of Mexico’s Joaquin “El Chapo” Guzman, long considered one of the most powerful drug traffickers in the world.