Having exhausted all legal possibilities to block his extradition to Colombia, the country’s convicted former agriculture minister’s last hope is US President Donald Trump.

The United States court of appeals upheld a lower court’s decision on Monday, and decided not to block the impending extradition of former Minister Andres Felipe Arias.

The United States fully complied with its obligations under the law in a manner consistent with nearly four decades of extradition practices between the United States and Colombia.

Is Arias an “opposition leader persecuted by the FARC”? 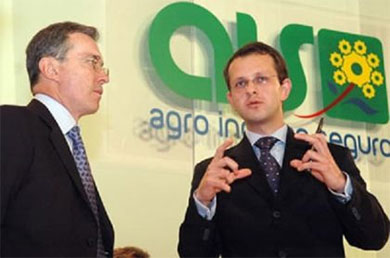 Having given up on the courts and having received the cold shoulder from the State Department, Arias is left with only one option, an intervention from Trump.

The far-right party of former President Alvaro Uribe has been calling on supporters to write the US president with the request to grant Arias, a.k.a. “Little Uribe,” political asylum.

According to Uribe’s party, the Democratic Center, the corrupt former minister is an “opposition leader who is persecuted by the FARC,” the rebel group that demobilized in 2017.

Or is Arias just another corrupt politician?

Arias fled to the United States in 2014, just before the Supreme Court’s sentenced him to 17 years in prison.

According to the court, Arias embezzled $25 million from the AIS program that was meant for poor farmers, but ended up in the pockets of powerful allies that could financially support his 2010 presidential bid.

The fugitive former minister was arrested in Florida in 2016 after the government of former President Juan Manuel Santos requested his extradition. He has been in jail most of the time since.

Arias repeatedly appealed his case and requested political asylum to prevent his extradition, but without success.

Uribe and Colombia’s ambassador to Washington Francisco Santos have previously lobbied the court to release their political ally, but also without success.

Whether Trump can be persuaded to grant Arias asylum is uncertain if not unlikely; the US president has fiercely opposed immigration, claiming that among Latin American asylum seekers would be criminals.

The US president making an exception for a convicted criminal could backlash, especially now that the 2020 presidential election race has begun and Trump is facing scrutiny from his political opponents in the Democratic Party.