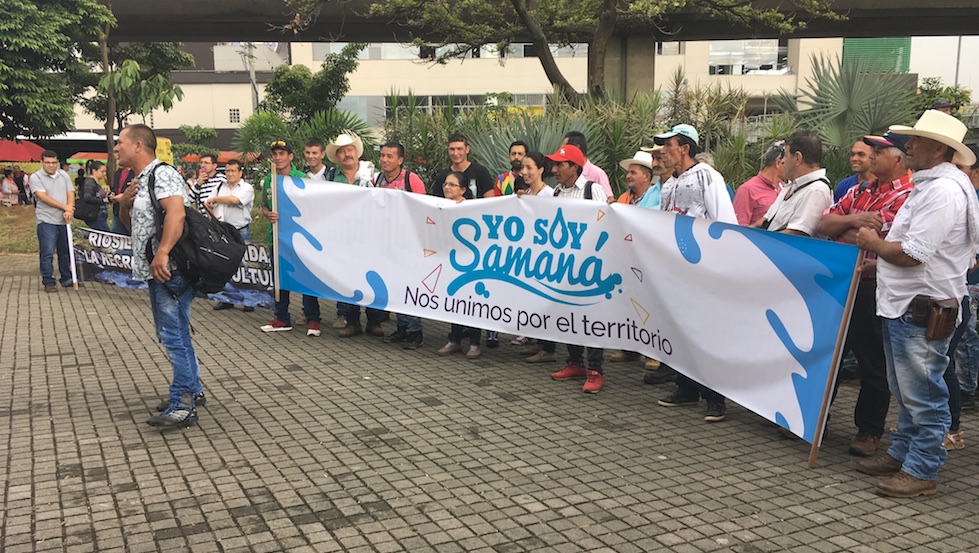 Around 50 victims of the armed conflict arrived in Colombia’s second largest city Medellin to meet with university biologists and students to show resistance against a large dam project that they say would flood their land, negatively impact their community and a disrupt rare river ecosystem.

Hailing from the municipalities of San Carlos and San Luis in northwestern Antioquia province, the majority of the opponents of the dam make their living through farming, fishing and artesanal mining. 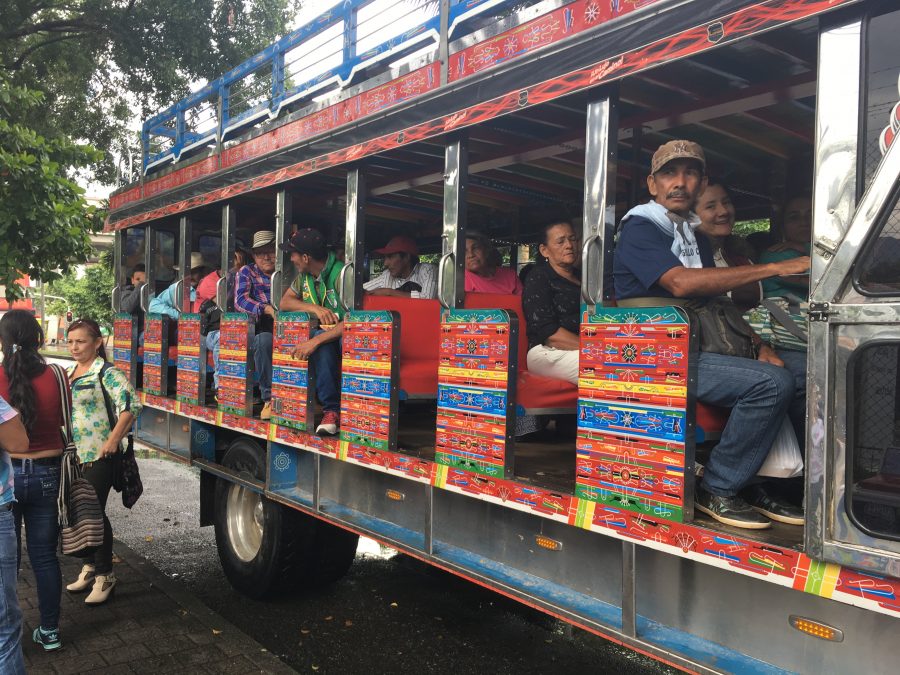 The local opponents of the dam made the nearly five hour journey to Medellin by chiva.

Energy company Celsia — which is part of the Colombian conglomerate Grupo Argos S.A widely known for holding a majority share of Colombia’s cement market — is behind the mega-dam project. The dam Porvenir II will stand 400-feet tall and flood nearly 2,500 acres of forest and pasture land, creating a reservoir that stretches 16 miles upstream of the Norte Samana river.

The Norte Samana is the last unobstructed river in western Antioquia region that still flows freely into the country’s most important river system the Magdalena.

The 352-megawatt dam has already been approved by Colombia’s environmental licensing authority ANLA, and construction is slated to begin early next year.

Research historian at University of Antioquia Carlos Olaya, who has written a book about large hydroelectric projects in the area and their role in the armed conflict, helped organize the event. Olaya explained that the event was held to fight against the dam-builder’s narrative that there is no local opposition to the project.

“We’re representing the social and environmental-based opposition to this dam project,” said Olaya. “The company’s narrative is being repeated in the Colombian media that there is no local opposition to the project… but that’s not true.”

Manuel Incapie, president of the community action board in the Samana village, said that contrary to media reports such as an article in Semana magazine — which held that the local community fully supports the dam — there is substantial local opposition to the dam project.

“It’s completely false, the majority are in disagreement, very concerned about the project,” said Incapie. “The people from Celsia have never been to our community, they’re complete liars when they say the community support this project.”

Up until 2006, Norte Samana River was practically inaccessible due to vicious fighting that took place between paramilitaries and the guerrilla. Many of the people who lived around the river, including the entire Samana community, were forced to vacate their land around the year 2000.

In 2011, President Juan Manuel Santos passed the Law on Victims and Land Restitution, which aimed to return stolen land to rural people who were displaced during the conflict.

Community member Trinidad Posada explained to Colombia Reports that many families in Samana are still in the process of reclaiming the land that was taken from them or sold at unfair prices to large landholders during the height of the armed crisis. Today, some families are now facing “relocation” due to the construction of the dam.

“If the dam is built, I don’t know how they can guarantee us our right to land restitution,” said Posada.”They will be taking away what they are giving back to us.”

Another issue for the communities around the dam is the fish populations in the Norte Samana. In the river, there are many species of fish including catfish and freshwater herring. However, most prized catch is the bocachico, an endemic migratory fish in Colombia that migrates upstream each year from the lowland swamps in the Magdalena river valley to the fast moving tributary waters high in the Andes Mountains such as Norte Samana.

The community members fear that with the dam and the reservoir, the migratory bocachico will not be able to make its way up the Samana and that the community will lose a valuable form of income and sustenance.

Opponents of the dam are also concerned that the construction of Porvenir II would mean a loss of biodiversity. Biologist Saul Hoyos said that endangered plant species that are endemic to this peculiar canyon ecosystem along the Norte Samana River could disappear forever if the dam is built as planned. 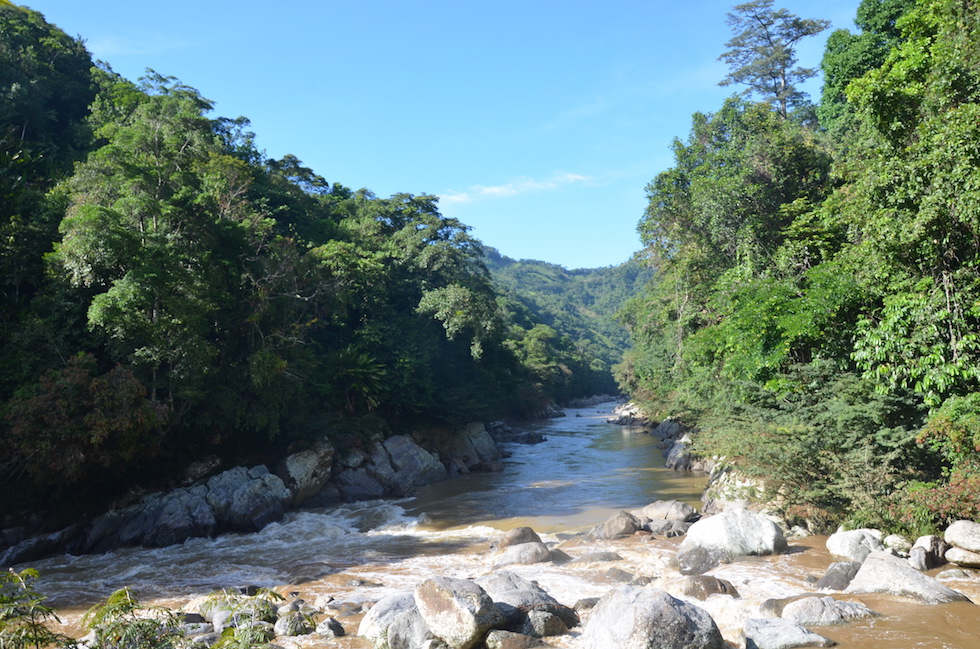 Last year, Hoyos, working with the renowned biologist Rodrigo Bernal, discovered a new endangered species of rheophytic palm, which lives along the shores of the Norte Samana precisely where the river where will be flooded. The team officially named the new palm Aiphanes argos — after Argos the investor group behind the dam.

While Celsia says that the plant is found in other stretches of the river and tributary streams that will not be flooded and that they are obligated to relocate the plant, Bernal told Mongabay.com that 80 to 85% of the plant individuals would be drowned with the construction of the dam, leaving less than 100 specimens in their natural habitat.

“If the majority of the plant’s population is destroyed, the species’ survival becomes extremely difficult,” Bernal said. “Any little change or disease would have the potential to extinguish the [Aiphanes argos palm] forever.”

After holding a forum and rallying at the Jardin Botantico in central Medellin, the opponents of the project signed a formal letter, which they they aimed to deliver to Celsia’s offices in Poblado in southern Medellin. However, when they arrived, the opponents were refused entry although the letters were received by reception who said they would deliver them to project leaders.

Posada was upset that the members of her community were not able to enter Celsia’s building, “they come to our land expect to turn everything upside down and then they don’t even let us come in their building to express our concerns… what a lack of respect.”