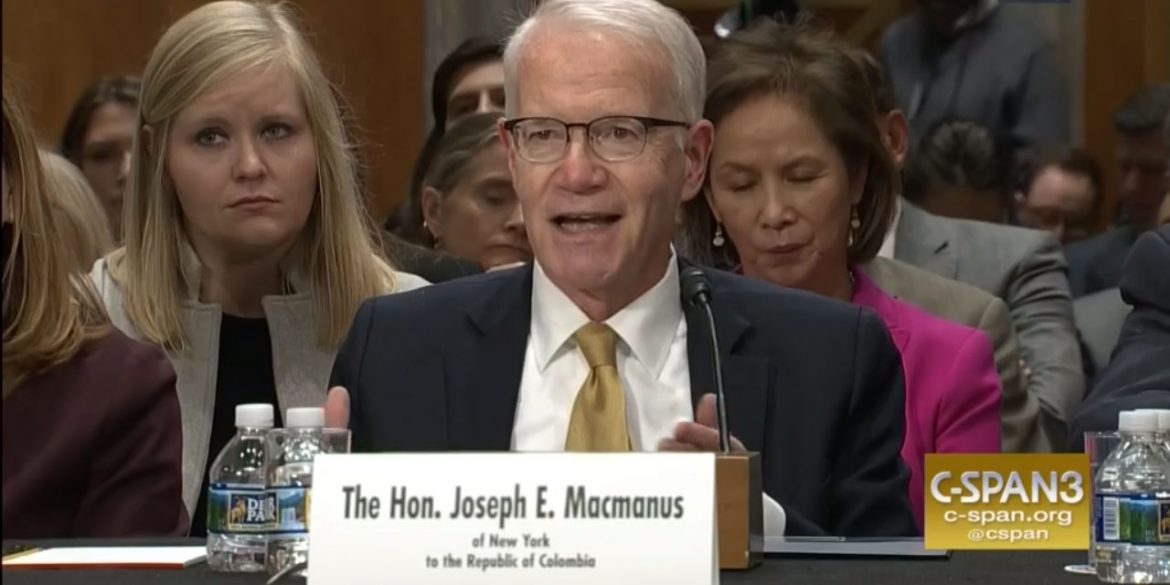 A last-minute parliamentary maneuver in the US Senate has blocked Joseph Macmanus from being confirmed as the new ambassador to Colombia, possibly clearing the way for a nominee less supportive of the peace process.

If the hold placed by Republican Senator Mike Lee (Utah) is not lifted, President Donald Trump will have to nominate someone else.

But in the time since Macmanus was nominated, Trump has put in place a new Secretary of State, Mike Pompeo, and a new National Security Adviser, John Bolton, both of whom known for hard-line views on foreign affairs.

A new nominee suitable to Pompeo and Bolton may be more aggressive in demanding a major increase in forced coca eradication and less likely to support the already struggling implementation of the FARC peace treaty.

Macmanus is a career politician whose confirmation was approved by the Senate Committee on Foreign Relations and sent to the full Senate for a vote.

But Lee placed a “hold” on the nomination, preventing a vote and effectively blocking Macmanus’ nomination.

A hold is a controversial maneuver which allows a single senator to prevent the entire Senate from voting on a particular matter. Unless lifted by Lee, the hold blocks Senate action until a new Senate begins work in 2019.

Though the maneuver has been strongly criticized and challenged, it remains part of the operating rules of the Senate.

Lee, an influential extreme conservative with libertarian leanings, was a founding member of Congress’ so-called Tea Party, a group of outspoken right-wingers.

He has no experience in foreign affairs but has criticized Macmanus for his work in the State Department when Hillary Clinton was Secretary of State. In particular, he keeps alive the narrative that somehow Clinton was to blame for a terrorist attack in Libya in which the US ambassador was killed.

“Sen. Lee still has his hold on Macmanus, and we have no plans to lift it,” his spokesman told the Washington Free Beacon, a conservative news outlet.

Macmanus’ prospects have been further dimmed by the departure of two of his strong supporters in the State Department, former Secretary of State Rex Tillerson, who was fired by Trump, and Tom Shannon, a long-time top official who has already announced his retirement.