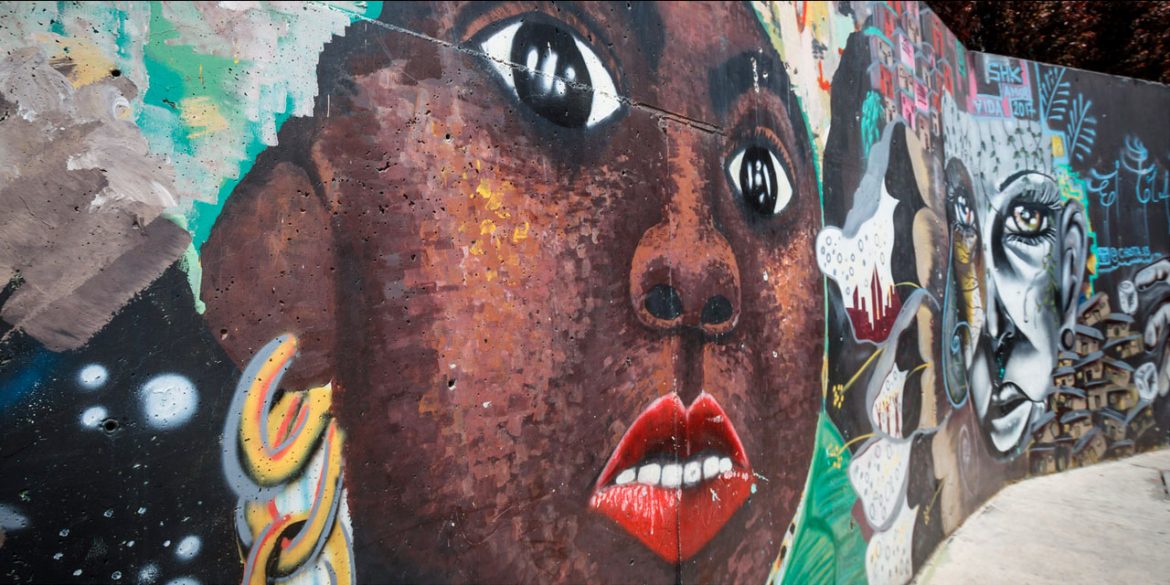 Comuna 13: How a Medellin community turned a war zone into a tourist attraction

It is probably fair to say that few places on the planet have ever undergone a transformation as comprehensive as Medellin’s Comuna 13. Even fewer can claim to have done it themselves.

Once the dark heart of Colombia’s armed conflict, Comuna 13, or San Javier as it is officially called, was for many years the stage for turf wars between guerrilla forces, paramilitaries, and the government, suffering some of the bloodiest battles of the civil war.

However, with its past firmly behind it, the area is now heaving with color, character and tourists, not as the result of government policy, but because a community took control of its own destiny.

While Comuna 13 had been a residential area since the 1940s, it underwent a huge expansion as mass displacement due to Colombia’s armed conflict drew many thousands to Medellin, and Comuna 13 in particular.

The late seventies and early eighties saw 1,500 new families arrive in Comuna 13, but the urgency of their situation and lack of existing infrastructure led them to self-build. The quality of these settlements was poor, and they were forced to drink from contaminated local streams and steal electricity from power cables.

This poverty, coupled with its strategic location for traffickers of both drugs and arms, led to an infestation of gang violence. As the end of the 1990s, violence between paramilitaries trying to oust gangs aligned with leftist groups escalated. 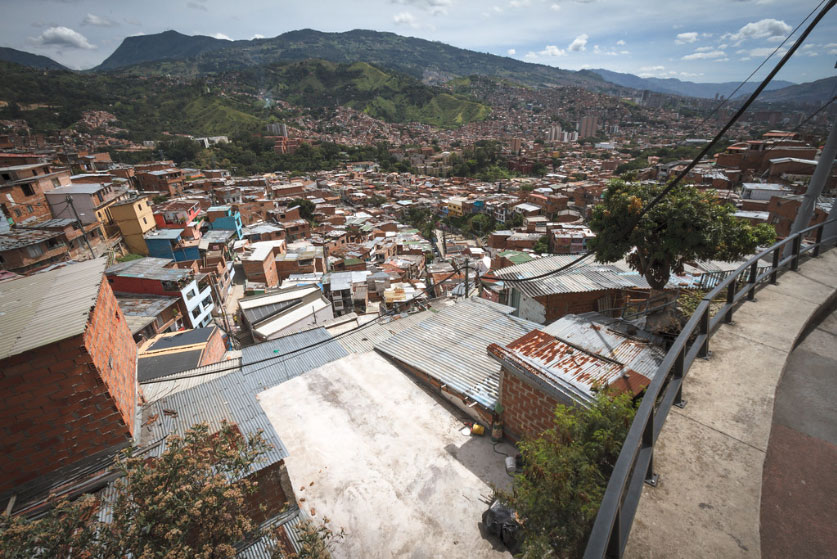 The period 1996-2002 was the height of guerrilla control of the region, and saw Comuna 13 become the third most violent district on the planet. Armed groups were so prevalent in the district that the government dared not enter, and the area was largely left to its own devices.

“They helped us in many ways” self-taught tourist guide Juan Jose Hincapie told Colombia Reports. “We didn’t have to pay for water or electricity- everything was free thanks to the guerrillas using them.” He went on to recall how the guerrillas would steal government vehicles and give them to the locals, who were unsurprisingly unable to afford their own.

However, his abiding memory of this period is one of coercion, control and brutality. Guerrilla groups were the law in the area, and they ruled with an iron fist.

They controlled us completely…we literally couldn’t do anything that they didn’t approve of. Without their permission, we couldn’t even go out and play in the street.

Even from the perspective of a small child the guerrillas were ever-present and all-powerful. According to Hincapie, he and his friends had to ask the permission of the guerrillas if they wanted to play football in the street. The guerrillas would lend the boys a ball, but also set a deadline for its return.

“We had one hour. If we continued for an hour and a half, they would come down and destroy the ball”, he recounted.

For older children and adults, the consequences of stepping out of line were even more severe. If anyone got involved in activities the guerrillas disapproved of, such as drug use, they were invariably beaten up and sometimes simply shot on sight. 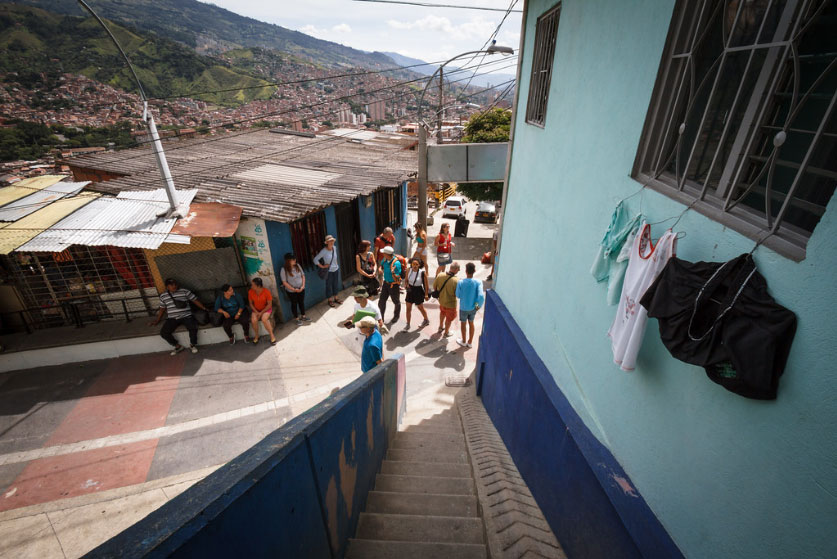 Tourists visiting the Comuna 13 know little about the neighborhood’s history, but the locals remember everything. (Image: The Colombian Way)

The end of the guerrillas

In 2002, the government apparently decided enough was enough, and ordered a series of controversial and brutal operations to flush out the guerrillas from the area.

According to the mayor at the time, Luis Perez, the operation got the green light after he contacted then-president Alvaro Uribe following a spate of accidental deaths that left two innocent university students dead.

However, Hincapie expressed his doubts about this version of events. In his opinion, the operation was largely motivated by the government wanting the isolated residents to start paying taxes to the city council. The fact that the guerrillas were offering free services to them and denying the city government tax revenue was, according to the tour guide, the driving force behind the operation.

Between 1996 and 2001, the government almost never cared about the district. They never came here for any reason. In 2002, they began to realize that they were losing a lot of money, but before that they didn’t care how we lived.

Whatever their reasons, the government had decided to put their foot down, and the stage was now set for one of the bloodiest battles of the armed conflict.

“Operation Orion” was the last in a series of operations against guerrillas in Medellin. Carried out in tandem by the police, the army and crime lord “Don Berna,” they turned the district into an all-out war zone and left dozens of residents dead.

From the government’s perspective, the operation was a success as guerrilla control of the area was relinquished. Berna was also happy, because he now controlled one of Medellin’s most strategically important districts.

The paramilitaries ruled with even greater brutality than the urban militias, apparently killing most of those accused even of petty crimes. 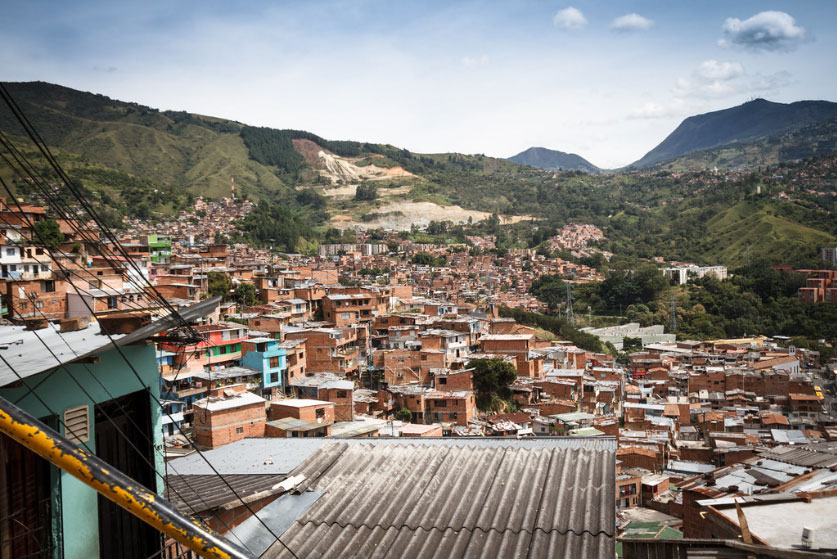 The quarry in the back in called la Escombrera, where locals believe hundreds of their neighbors were buried by the paramilitaries. (Image: The Colombian Way)

When did things start to improve?

Historically, the isolation of the community made it difficult for residents to get into the city, resulting in high unemployment rates and poverty which continues to breed organized crime in the area.

In 2008, the city government built a cable car network connecting the steep, isolated Comuna 13 to the rest of the city, and 2011 saw the opening of a series of escalators, saving residents a 480 meter climb to the highest parts of the district.

The city government also built important educational facilities to improve people’s prospects in the area and nudge them away from crime, most notably the Parque Biblioteca, or Library Park, which provides disadvantaged children with access to computers and workshops to learn new skills.

But government remained a fundamental issue, spurring the locals to run many of their own programs to develop their long-forgotten corner of the city, organizing cultural and sports activities.

The residents of Comuna 13 are by no means out of the woods, but their ability to take control of their own neighborhood allowed them to turn what once was the worst neighborhood in the city into one of Medellin’s most popular tourist attractions. 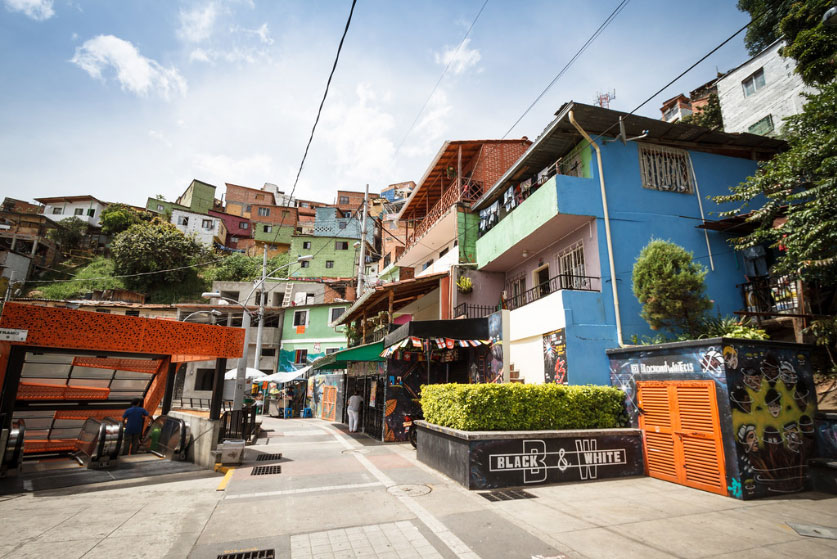 Entrance to the escalator that connects the high end of Comuna 13 to the lower parts. (Image: The Colombian Way)

Comuna 13 today and why you have to visit

Once they noticed foreigners beginning to appear near the escalators, locals began opening book shops and coffee shops and running all kinds of tours and activities that allowed them to develop the local economy while honoring their traumatic past.

Attracted to the district by the fascinating history, friendly locals, fine views and an explosion of beautiful street art, tourists now dominate Comuna 13, all of whom are proudly told how the community’s resistance to violence and their cultural wealth allowed them to improve.

The explosion of tourism seems to be a source of pride rather than tension. Children play street football among the tourists and locals go out of their way to provide as great a variety of food, drink and souvenirs as possible for visitors. Hincapie was visibly brimming with pride when talking about his neighborhood.

On the journey to the top, visitors are surrounded by colorful murals, charming cafes and souvenir shops. Guides are cheap and thoroughly worth it, costing just over $15 (50,000 COP). As far as I could tell, they all seem to have grown up here and provide a compelling insight into life in the district.

While many only speak Spanish, they are exceptionally friendly and helpful, and most importantly they know all the best spots for food and coffee. They are also especially good at giving perspective on the artwork adorning almost every wall.

These artworks are for the most part professional works by experienced artists, and teem with color and political symbolism.

When asked what he liked most about Comuna 13, Hincapie simply answered “I like showing people this beautiful transformation, having once been the third most dangerous district in the world… I like how these days we are famous for art and tourism rather than violence.”

The future of Colombia Reports relies on your financial support. Please become a patron and support independent reporting from Colombia.
AntioquiaComuna 13Medellintourism