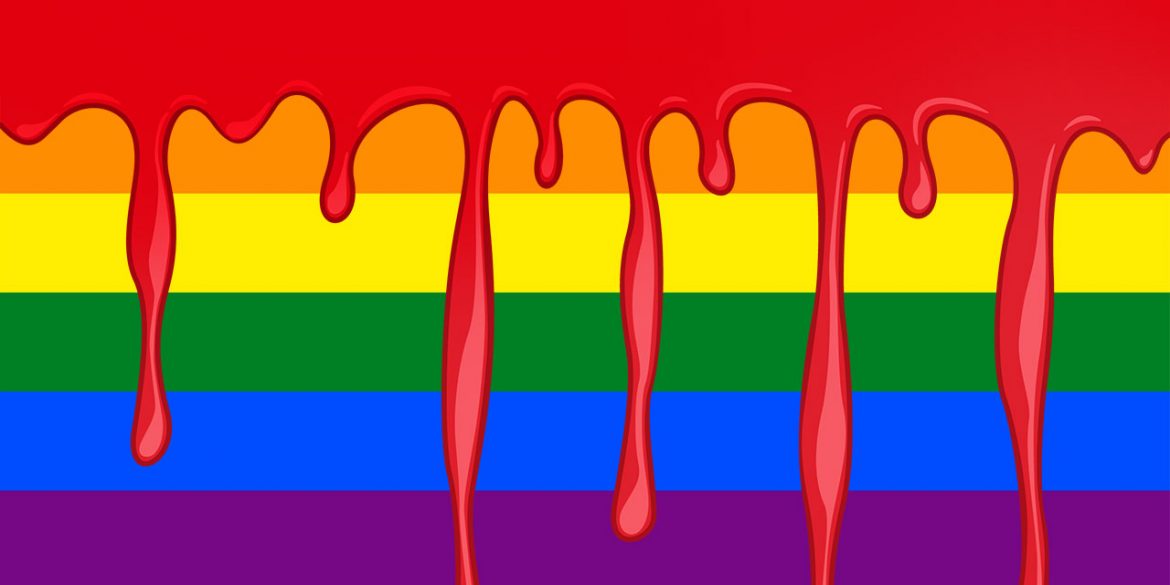 Colombia is leading the way on recognizing LGBTQ+ victims of conflict, but the revelations of a report released last week are nothing to celebrate.

The testimonies gathered for the country’s war crimes tribunal bear witness to a culture of discrimination that — armed conflict or no armflict —  is still alive today: they must be a starting point for a serious discussion about gender and sexuality in Colombia.

In a global first, Colombia’s Special Jurisdiction for Peace (JEP) has accepted evidence from LGBTQ victims of the country’s long and bloody armed conflict. Persecution of these groups is being treated as a crime against humanity under the Rome Statute.

Forced displacement, sexual assault, and murder of LGBTQ+ people were tactics of both FARC guerrillas and paramilitary groups to consolidate control of territory. Armed groups even produced pamphlets outlining their policy of persecution.

Controlling bodies is a way of controlling territory.

The report comes among the JEP’s first cases, opened to investigate conflict’s effects in the city of Tumaco and the Antioquia province. The victim registry for these two regions alone holds 879 LGBTQ+ people.

You need to analyse case by case, and understand that a victim could have been attacked first by the FARC and then by paramilitaries.

Attacks were often repeated, with different groups committing violence on the same individuals, and LGBTQ+ individuals. Displacement was also repeated, and victims could be forced to move from place to place again and again, creating a traumatic disconnection from their land, livelihoods, families, communities, and ethnic groups.

These attacks were also often met with total impunity – i.e. no state action – a failure which compounded the experience of persecution. This lack of support has led to a loss of faith in the state, likely causing serious underreporting, meaning that the statistics for victims are significant underestimates.

Evidence and testimony was compiled over seven months by Colombia Diversa and the ‘LGBT Voices’ Alliance, taking a community-focused approach. “We didn’t want to take an extraction approach. We wanted to identify the community processes which already existed, and it was via these existing groups that we found cases. This allowed us to create real relationships,” said Diaz.

Colombia Diversa was a strong presence at the Havana peace talks, and advocated for gender and sexuality to be considered in the peace process: their success in having LGBT rights included in the Peace Agreements with the FARC paved the path to this historic moment at the JEP.

The Nuremberg Trials of 1945-1946, in which members of the German Nazi regime were tried for crimes against humanity, were the first to judge cases of persecution and systematic violence. Since then, tribunals have seen cases relating to persecution on religious, political, ethnic and religious grounds: never before on grounds of gender and sexuality.

The group predicts challenges ahead in recognition of crimes against LGBTQ+ individuals by perpetrators, particularly when it comes to sexual assault. Perpetrators routinely admit to violent crimes, but it is rarer that sexual violence is understood as part of conflict strategy or power.

Society imagines that sexual violence has nothing to do with war and control. This relates to the world’s machista gaze, and in particular the machista gaze of war. To recognize your part in a massacre does not put at risk your status as a warrior – but rape does.

Colombia is bearing witness to a key moment for LGBTQ+ rights, but complacency would be misplaced.  Despite Colombia’s fairly progressive legislation is belied by ongoing discrimination and persecution remains strong in Colombia. Understanding sexual violence, particularly where it intersects with issues of sexuality, as a tool of control is a key factor not just in conflict contexts, but in persecution of LGBTQ+ individuals worldwide, and in peacetime.

What in our society is feeding that culture? We need to put our attention everywhere – not just armed groups and government.

During his election campaign, President Ivan Duque claimed he had “great respect” for the LGBTQ+ community, but his government is backed by conservative and religious groups that view homosexual acts as a sin, and who are gaining influence in the country.

In the coming months, reports will be presented to the JEP regarding the provinces of Tolima, Putumayo, Bolivar and Cordoba.

We believe in the JEP, and have hopes of recognition of these crimes.

This must be seen as a point of departure, and not of arrival. In examining the crimes of armed groups against LGBTQ+ people during conflict, Colombian society can begin to exorcise some of its living demons, taking a closer look at the conditions which allowed these atrocities – conditions which continue to dominate communities across the country.

This is a key step, but the road to LGBTQ+ equality still stretches far into the distance for Colombia.