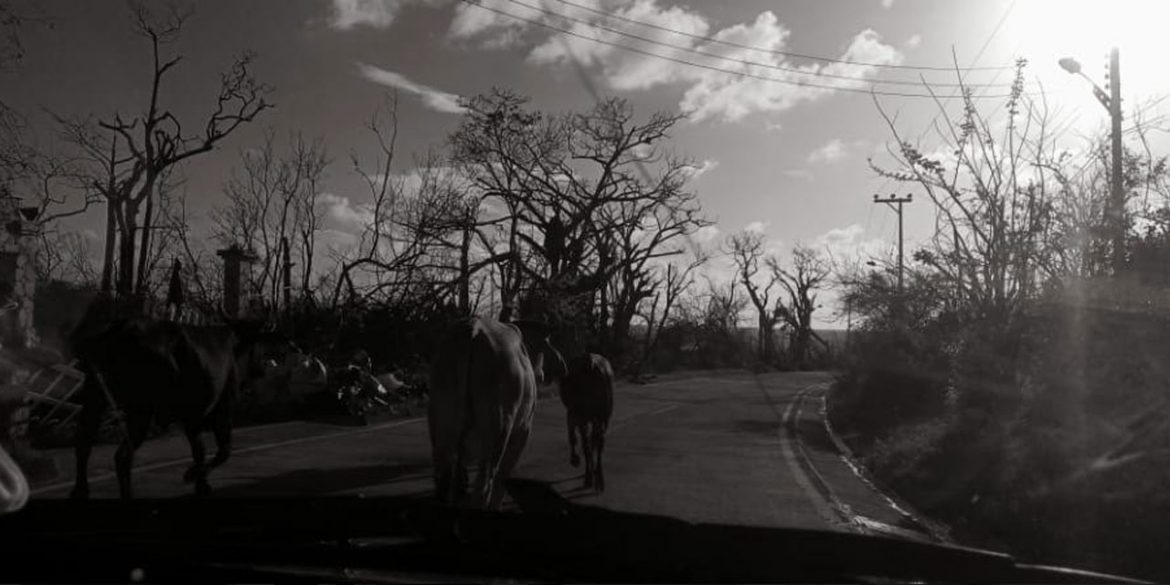 Colombia’s Providencia island: two weeks and some after Iota

Little more than two weeks after Colombia’s media reported that “Iota erased Providencia,” locals from the Caribbean island are beginning to realize that also the interest that followed the hurricane will abandon them.

Although the media reports became more encouraging over the initial panic, the photos and videos made it clear that what some call “The Horrible Night” had changed everything forever.

The first morning’s bread was the rubble that covered the roads and the impossibility of checking if family members and neighbors were still alive.

The island is still visited with relative continuity, but once night falls, walking the road around the island shows a different panorama.

The intense light of the streetlamps of the trucks that transport water, food or hope, illuminates the faces of children and adults still in shock on both sides of the sidewalk, seated in plastic chairs, looking for in the casual conversation in the dark, something of the normality that was lost that night of November 16.

The scenario is livened up by crickets, the applause when mosquitoes are killed, the crying of a couple of children and an occasional laugh that seems misplaced.

The tragedy is not uniform; there are now new levels of privilege; there are those whose house resisted stoically, those who partially or totally lost a roof and a thousand memories, and ultimately those whose only possessions are life itself, and a blue tent with orange trimmings.

Daily life has gradually become a kind of static survival. Each dawn is inaugurated with uncertainty.

In some sectors, where 18 black tanks now form part of the landscape and are filled with water for consumption, the search for food and water is partially sustained. Soon there should be 26.

Every so often you see the logo of an international organization bringing more than 3000 hot meals to victims and volunteers with superhuman efforts. The food is tasty and a sympathetic solidarity is stimulated while sitting on the edge of the sidewalk with biodegradable cutlery.

The volunteers disperse like small colored dots in the middle of the burned landscape left by the salty wind. At times it’s like their efforts are diluted in vast devastation and that their objectives are as altruistic as they are tenuous.

Their coordination with the community is a titanic task and offering relief, but the realization is slowly kicking in that the shock that will shake up like a second round of the hurricane after an incomplete knockout is yet to come.

The fact is that one day the volunteers will leave, and with them the hot meals, the doctors who know no borders and those of the Red Cross.

The media attention will also go with them, as well as the empathy wrapped in plastic that comes with the donations of medicine and water.

Then the men and women who lost everything will be looking for those who have let them down since forever.

Outside, there have long been complaints that most of the victims are left unattended. Inside the disaster, not even half of what is feverishly talked about or discussed on social networks is known.

The internet is located in such specific areas of the island that you have to step inside their invisible boundaries in order to receive that message that on the next boat something may come for everyone or that the son who was sent on a plane after the storm misses his mother and his dog.

The priorities are different: working gloves instead of likes, sharing a roof rather than “sharing a picture” and protecting grandmother from the cold instead of making comments with a sarcastic wit.

The pandemic is forgotten and remembered in overcrowding and consoling hugs. Social distancing seems just another of this year’s ironies under these circumstances.

COVID cases tripled in the first week but only few showed complications, so this looming threat remains latent.

After the first ten days, even the most resilient of people begin to show exhaustion that cannot even be categorized.

And to all of these when the landscape competes with the devastation of a natural apocalypse, suddenly the green of the hills reappears timidly, and the sea that seems to have a teenage character appears calm and colorful after a fierce outburst.

The sea and gasses recompose themselves with more hope than law and order. The cattle, in the meantime, is beginning to make its own inroads to look for food, absorbed by their own quest for vital minimums.