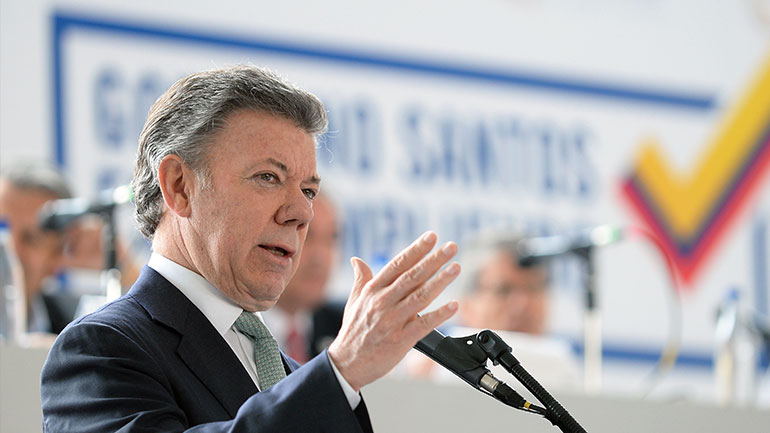 Peace talks between Colombia’s government and the country’s largest rebel group have advanced more in the past weeks than in the preceding six months, said President Juan Manuel Santos Monday.

Following the end of the 40th round of peace talks that began in November 2012, Santos announced on Monday that recent attempts to accelerate the talks and deescalate violence have resulted in major advances.

“In the past two or three weeks, [the peace talks] have advanced much more than they have in the past six months,” said Santos.

Since the talks began, negotiators have arrived at agreements on land reform, ending the FARC‘s role in the illegal drug trade and political participation for former rebels.

However, when the negotiators entered negotiations on how to provide justice for the more than 7 million victims of the 51-year-long armed conflict, the talks stalled as neither party was willing to take full responsibility for the victimization.

As progress in the talks was held back, violence between the FARC and the military escalated, forcing foreign host and sponsor countries to intervene.

Since then, the negotiators agreed to allow an international commission to negotiate the thorny subject of transitional justice, while top military and rebels commanders negotiated the demobilization, disarmament and reintegration of fighters.

The main negotiating teams have been discussing details of the previously agreed points and victim compensation.

The recent progress in the talks “should fill Colombians with enthusiasm, for the immense benefits that the peace process” will bring to Colombia.

“It is a door to a marvelous destiny,” said the president.

Over the weekend, the FARC also said to be “optimistic” about the talks and their progress.

“We believe that we are heading in the right direction and that Colombia will reach a peace agreement,” the rebels’ chief negotiator “Ivan Marquez” said.

Colombia’s armed conflict began in 1964 and has seen more than 260,000 Colombians killed and six million displaced.

The next round of talks are set to begin on September 11.