Colombia’s local elections: municipalities at risk of fraud and violence down 25%: observers

Municipalities at risk of fraud and violence during Colombia’s upcoming local elections dropped 25% compared to 2015, according to independent electoral observers.

With local and regional elections set for the 27th, the Electoral Observation Mission (MOE) warned Tuesday that there is still significant risk of fraud and violence in 152 municipalities.

This 25% decrease in risk is less than the electoral observers had hoped for considering the demobilization of the FARC’s largest rebel group, the FARC, in 2017.

“Although the MOE has registered a significant decrease in electoral risk since 2007, it worries us to see a stagnation in that fall,” said the report.

Municipalities at risk of election fraud and violence

The fundamental right to political participation, the pillar of our democracy, must be guaranteed to the fullest throughout the national territory, and especially in the aforementioned regions, since the exclusion and abandonment of those regions have reproduced since decades ago vicious circles of violence that prevent us from thriving as a nation.

The MOE warned that the western provinces of Choco, Antioquia, Nariño, Cauca and Valle del Cauca are at the greatest risk with several municipalities on alert.

The watchdog revealed that 40 municipalities in particular are at “extreme risk” of fraud and electoral manipulation, while in another 66 the risk is classified as “high” with 46 more at “medium” risk. 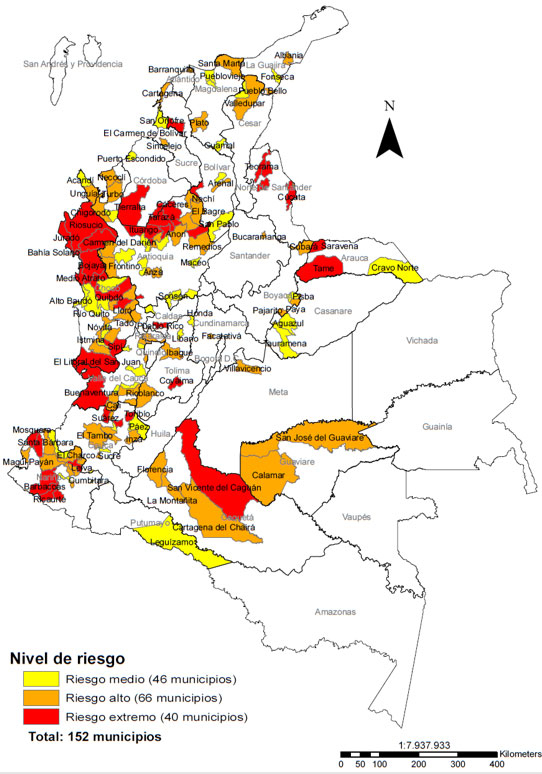 The province of Choco in particular is one of major concern for the MOE with 73% of its municipalities on alert with localities such as Quibdo, Jurado, Carmen del Darien, Bojaya, Riosucio, Alto Baudo and Sipi at high risk.

With illegal armed groups vying for control over territory and illegal economies, violence against candidates and voters has increased, but in less municipalities than before.

In addition, those in support of the implementation of  the peace agreement with the FARC, which involves land restitution and the replacement of illicit crops with legal ones have also been targeted.

“These figures reflect the progressive sophistication of electoral fraud. A little over a decade ago, phenomena such as parapolitics manipulated Colombian democracy, causing grotesque distortions of electoral results,” says the MOE in the report.

In response to these alerts, the National Electoral Council (CNE) last month cancelled 915,853 registered cards for the October regional elections amid fears of possible irregularities.

The Electoral Risk Map identified that on the border with Venezuela, the Amazon, the Pacific, and the corridor that separates the Caribbean from the center of the country, there are at least 305 municipalities on alert for electoral violence.

The MOE considers that guarantees must be given to those areas that have suffered the most violence in order to “break the cycle of war” through “peaceful political participation.”

Colombia’s Ombudsman’s Office last month warned of what it considered to be an electoral risk for more than 400 municipalities, covering more than half of the country’s national territory.

Among the cities at high risk of violent incidents are the capital Bogota and the country’s second largest city, Medellin.

The Ombudsman’s Office highlighted that those at the greatest risk include demobilized FARC members, community leaders and human rights defenders, black and native Colombian candidates as well as State officials in charge of monitoring fair elections.

MOE has already reported that at least five election candidates have been murdered in the past two months.