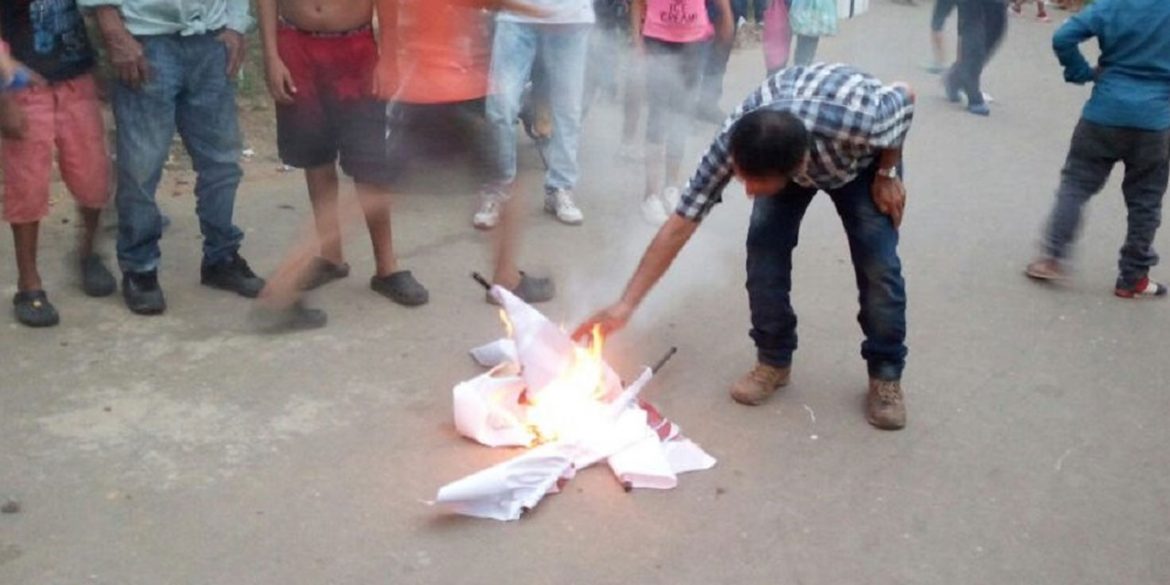 A protester burns a flag of the FARC in Florencia, Caqueta. (Image: YouTube)
Elections

Colombia’s election race turns violent, not just with the FARC

Colombia’s leftist politicians face violence and aggression as conservative rivals fire up anti-communist sentiments and fears the country could become a communist state like Cuba.

The FARC, the socialist party formed by former guerrillas, has seen most violence at less than a year of their demobilization and disarmament.

The car of FARC presidential candidate “Rodrigo Londoño” was virtually destroyed when campaigning in Armenia, the capital of his native Quindio province.

A campaign event of aspiring FARC senator Luciano Marin, a.k.a. “Ivan Marquez,” was canceled on Sunday after angry protests in Florencia, a town in the south of the country that has been battered by the armed conflict.

According to Marin, the hard-right Democratic Center party instigated the violence.

Marquez claimed that CD Senator Ernesto Macias “urged the masses to attack and sabotage” the FARC event in a rival campaign event hours before the former guerrilla leader was supposed to appear.

The aggression that is marring the elections is not just affecting the former guerrillas who can count of broad resentment after decades of armed conflict.

Former Santa Marta Mayor Carlos Caicedo, a social democrat, was targeted in Cienaga on Sunday when a barrage of eggs, bottles and even rocks were thrown at him during a campaign event in the Caribbean town.

Two congressional candidates of the Green Alliance party, who were also at the event, were reportedly also attacked.

Caicedo blamed the Radical Change party of former Vice-President German Vargas of having organized the protest.

“Those young people were sent by them, and if something happens to me or any member of my team, the only ones responsible for this will be Vargas and his entourage,” the ally of former Bogota Mayor Gustavo Petro said in the aftermath of the attack.

According to De la Calle, Vargas and his party were applying tactics commonly used by far right political forces to instill fear on the electorate.

Vargas and Uribe have claimed that candidates of the left want to “turn Colombia in a new Venezuela,” the neighboring country that saw its democracy erode under socialist President Nicolas Maduro.

“I believe we all agree that aggression and violence towards candidates in these elections may not occur. We want transparent and peaceful elections,” said Santos.

“Citizens have the right to manifest themselves freely and to express themselves peacefully. It is important that whichever expression in peaceful,” Pardo added.

Pardo is one of the ministers in charge of leading Colombia through a peace process that seeks to end more than half a century of political violence.