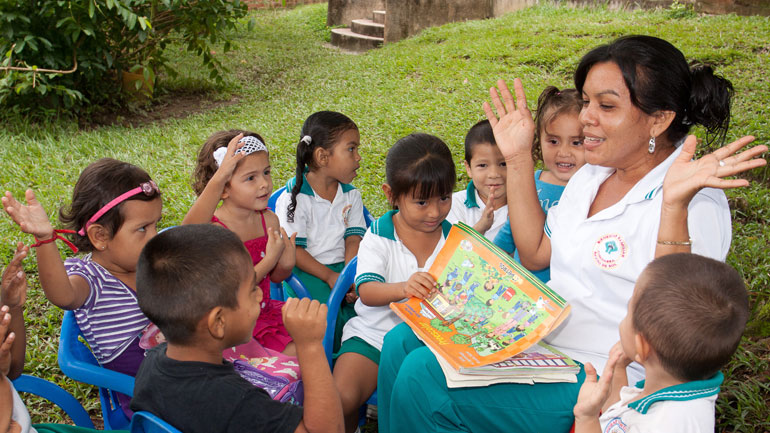 Approximately 7,000 “community mothers” began an indefinite strike on Monday, amid ongoing concerns over the deteriorating humanitarian situation of the poorest of Colombia’s children.

The women aim to achieve wide-ranging reforms in working conditions and an increase in resources for the provision of child welfare in Colombia from family welfare agency ICBF, whom unions describe as being under a “makeshift administration.”

Due to a drop in oil prices, Colombia’s national government has been forced to implement “intelligent austerity measures” that are also affecting child welfare programs in place for the most needy.

According to to the National Union of Workers in the Care of Children and Adolescents, traditional family welfare programs, which have been attended by working mothers for more than 30 years, have been terminated without the long-time workers receiving any kind of benefit.

The decision to terminate the program means that thousands of children will not be looked after this year because there is no program to facilitate them.

Additionally, “thousands of children have not been catered for this year because there is still no infrastructure to serve them. This has resulted in the death of children from malnutrition or conditions of neglect,” a union representative told press.

These workers say that since February they have been seeking a meeting with ICBF director Cristina Plazas, but without success. Now, the women have had enough of their director’s inaction and are calling for her resignation.

Workers on the ground have complained about the lack of provision for child welfare by the ICBF.

From the La Guajira region in Northern Colombia, community mother Nelly de la Hoz said that ‘I am forced to make soup for 12 children with only 6 ounces of beans.”

Another worker from the Cundinamarca in central Colombia lamented the inaction of the ICBF, “when we see that there is a child in a situation of malnutrition, the ICBF submits a form, but does nothing to remove the child from the situation.”

The Family Welfare workers’ union said that the community mothers are victims of labor persecution, without being fulfilled with full payment of their back wages nor the money to be rotated for child support.

The strike will continue until the women’s demands are met by ICBF director Cristina Plazas and a work plan is achieved to improve conditions.