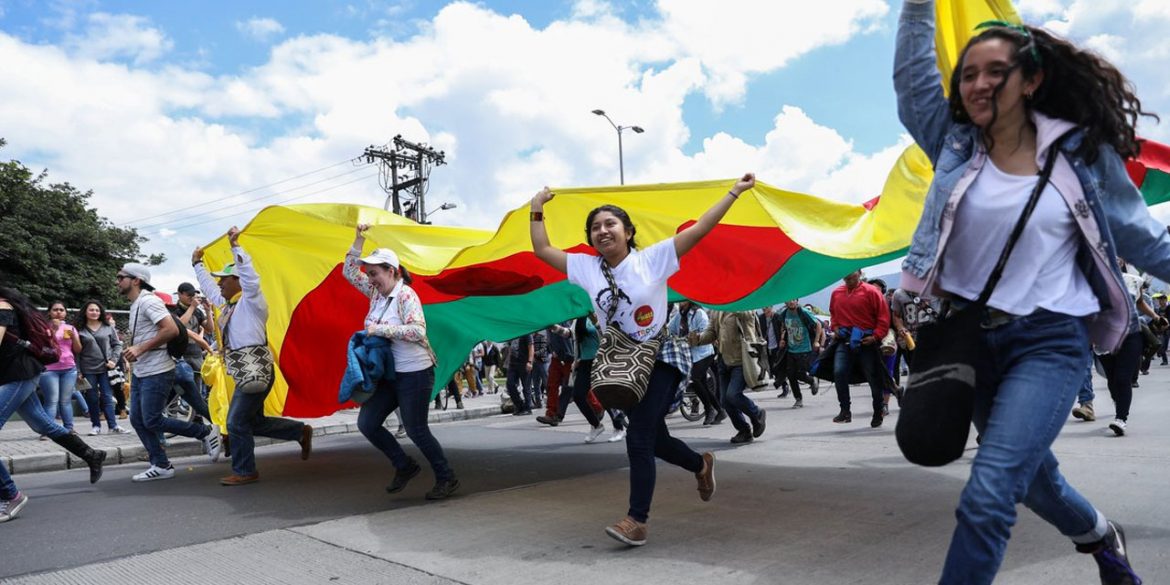 Largely peaceful demonstrations took place across Colombia, from cities to villages, with thousands taking to the streets for anti-government marches.

The protests were against President Ivan Duque’s controversial National Development Plan (PND), and in defense of the country’s ongoing peace process, as well as railing against the high rates of murder of social leaders.

They come less than three weeks after nationwide indigenous protests that brought one of Colombia’s biggest highways to a total standstill for nearly a month.

Also on Thursday, indigenous peoples protested throughout the country to demand respect for their rights and government compliance to hundreds of broken agreements. 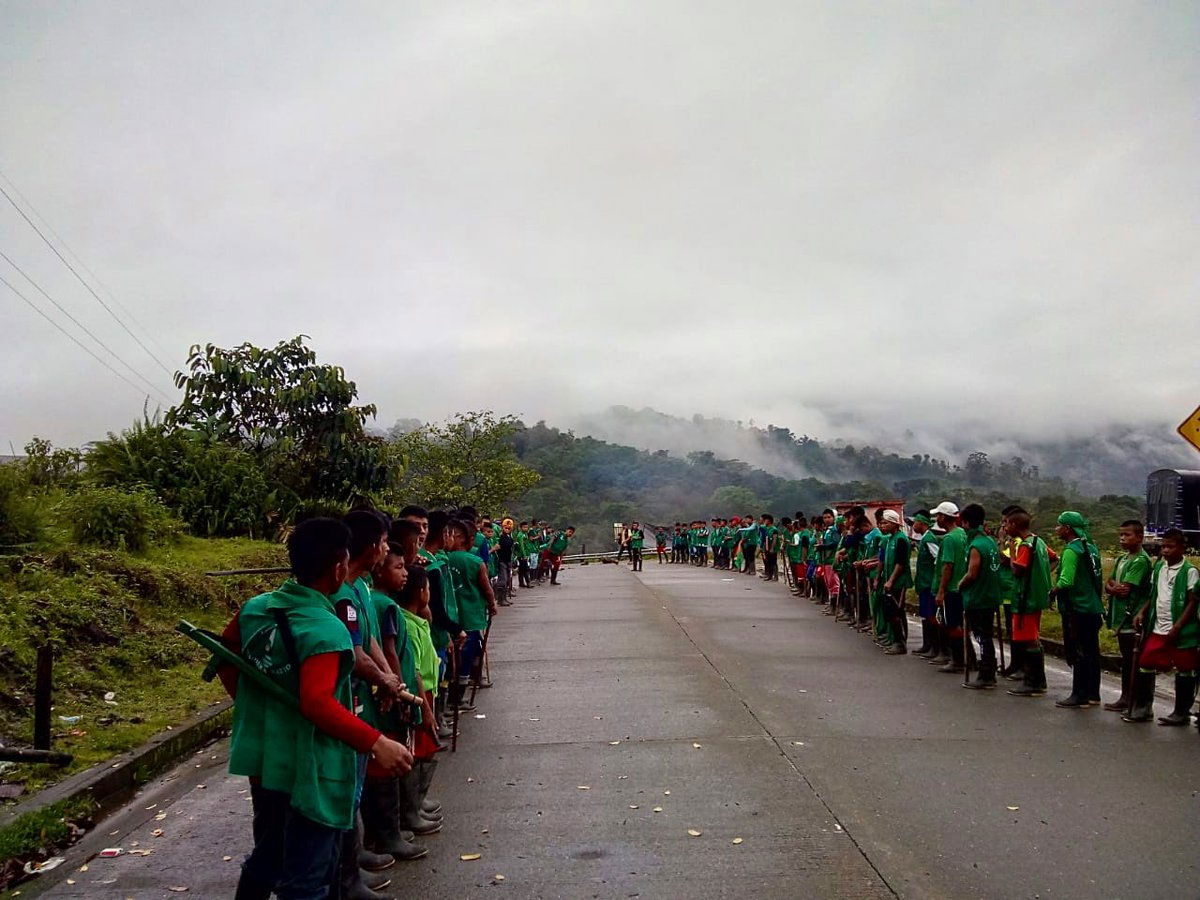 Native Colombian and Afrcolombian communities protest in Tado, a neglected municipality in the west of the country. (Image: Colombia Informa)

Minister of Defense Guillermo Botero announced the deployment of large numbers of police to guard the country’s main roads against blockades, claiming that the “right to freedom of movement” may not be allowed and to prevent “infiltrators” of illegal armed groups.

Newspaper El Tiempo reported that police in Bogota impeded one of their photographers, including use of tear gas against him, as violence broke out near the National University.

According to pensioners’ rights organization La Verdad del Pensionado, riot police attacked protesters after they arrived on Bogota’s central Simon Bolivar Square where they hoped to make sure their voices were heard in the political heart of the country. 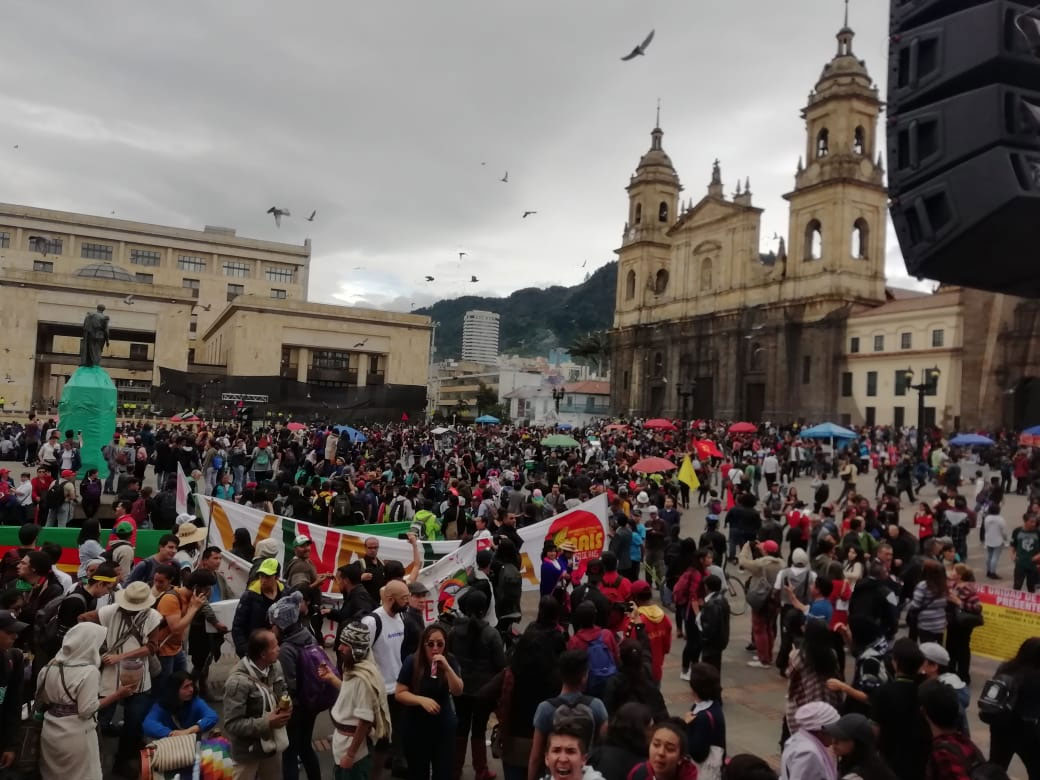 The urban demonstration has a particular focus on labor rights, such as pensions and job stability. Labor union CUT said the PND contains a number of articles which do not contribute to the welfare needs of the population, as well as threatening pensions.

Its content worsens the conditions of backwardness and existing poverty.

The PND also introduces new structures of labor, including the possibility of hiring ‘by the hour,’ threatening health and pension benefits, as well as the right to minimum wage.

Teachers are a strong presence in the protest, with an estimated 300,000 teachers demonstrating nationwide. Teachers claim that the PND will privatize education and ignore the agreements reached previously. They also denounce the stigmatization of the teacher’s union which the current government has promoted.

Coffee-growers have also joined the protest, due to economic crisis in Colombia’s coffee regions. “We are facing a serious situation: a situation of hunger and poverty,” said Oscar Gutierrez, executive director of agricultural group Dignidad Agropecuaria.

Among other complaints are the Government’s refusal to continue peace talks with guerrilla group the ELN, the undue influence of the USA, denial of ongoing armed conflict and rights of victims of that conflict, and the growth of paramilitarism.