Colombia’s coffee farmers continue to struggle, despite an 80% rise in global prices that has brought the commodity up to its most lucrative levels in the past two years.

It’s been a difficult stretch for Colombian producers, still reeling from a four-year wave of disease, high prices for fuel and fertilizer, market fluctuations and complications brought on by shifting weather patterns that, at its worst, forced farmers to sell their product at 50% loss.

Now, as global prices experience something of a resurgence, Colombian producers still waiting for the start of harvest season find themselves incapable of taking advantage.

Thanks in part to a crop “renovation” program that replaced traditional strains with disease and weather-resistant, Colombia’s coffee production reached a six-year high in 2013, after 2013’s harvest was devastated by a fungal and insect plague.

According to the Colombian Coffee Growers Federation (CFC), which led the crop renovation scheme with credit from a number of Colombian banks, production from October 2013 to January 2014 grew 34% as compared to the same time the previous year.

However, the increased production came toward the end of the harvest season in many of the country’s key coffee-growing regions — especially in the important Coffee Axis in central Colombia — too late for the farmers to reep the benefits of resurgent international prices.

With months still to go before the start of the next prime harvest season, which starts in September for much of the country, and the pressure of mounting debts and several years of huge losses for producers, it’s unclear whether farmers will be able to hold out until the fall, or whether prices will.

“We’re in a sad situation, grave […] you can put the price at a $1,000 [per load] and it wouldn’t matter because we don’t have anything to sell,” said Gonzalo, a coffee grower from the state of Antioquia who asked to remain anonymous, in an interview with Colombia Reports.

“Why are we in a grave situation? Because we made a loss when we sold the harvest last year [December], and if we made a loss with the harvest then we are even worse when we don’t have one,” said Gonzalo, adding that the issue is echoed throughout many regions in the country where the harvests begins in the latter half of the year.

According to the CFC, the bulk of the harvest in a number of high producing areas occurs from September onwards with the “Mitaca”, or interim harvest, starting in the important coffee belt areas in late March and April.

Mainly due to unseasonably dry weather hampering the coffee region in Brazil – the world’s biggest coffee producer — the price of Arabica green beans has experienced the biggest rally for the commodity since 1994, according to international newswire Reuters. 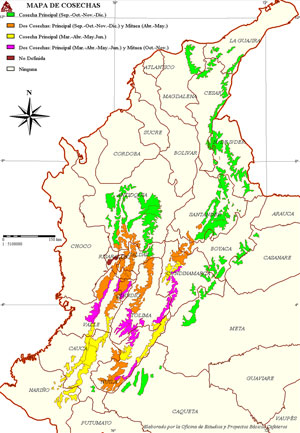 Since January, the speculation for a worldwide deficit of coffee has driven the New York stock exchange price from $1.34 to $2.05 per pound, and Colombia’s internal price from around $170 to $414 per 275-pound load, according to CFC figures.

This does not necessarily translate to small farmers like Gonzalo, who sell their beans through intermediaries and still have to contend with the high price of gasoline and fertilizer. For them, the rise in price is a brief respite in the face of a longstanding assault against their livelihood.

“We are now just above production costs after years of loss, but it’s only a little, and it does not mean that we are currently experiencing a huge profit margin,” Victor Correa, spokesperson for Coffee Growers’ Dignity (MDC), told Colombia Reports.

Hailing from the state of Antioquia’s important southern coffee region, in the heart of the Coffee Axis, Correa and the MDC have been outspoken critics of the government of Juan Manuel Santos and its lack of support for coffee farmers during the last few years of decreasing prices.

The 2012 slide in the international price bottomed out in November 2013 at $1.23 and led to demonstrations by thousands of coffee growers alongside community leaders, students, truck drivers, and miners, who demanded better government management not only of the agrarian sector, but of the Colombian countryside as a whole.

MORE: 2013: The year of social protest and repression in Colombia (Pt 1)

A coffee-specific strike earlier in the year brought about the creation of the Protection for Coffee Income (PIC) subsidy, which was implemented in the summer and was designed to pay farmers a certain amount based on the internal price of coffee, with a maximum threshold calculated at $340 per load.

According to Correa, the PIC — now temporarily ceased due to the recent increase in price — “does not give us profitability, what the subsidy does is generate sustainability of production costs,” which hover around $320 and $340 per load. Correa has joined other voices in denouncing a shoddy distribution of the program funds, and explained that, regardless of whether farmers receive the subsidies designated to them, “For a load of coffee to be profitable the internal price will have to reach about $500.”

“However, the current level of prices are not generating the profitability for many farmers as there is no coffee to sell, ” he confirmed.

CFC Communications and Marketing Manager Luis Samper told Colombia Reports that even though the situation seems to be improving for growers, there is no guarantee that international prices will continue their ascending trend.

“Much depends on whether Brazilian production can recover from this year’s drought,” he said.

The future success of Colombia’s coffee farmers, then, is built on the continued devastation of their counterparts in Brazil. This cold fact of this dynamic is not lost on Colombian growers, themselves the recent victims of plague.

“What one sees with this type of economic reality in the world is that it pins the poor people against the poor people,” said Correa. “We need a conversation from the producer countries, to demand respect and adequate conditions for the commercialization of our product.”

Gonzalo expressed similar sentiments, but does not think that any grand cooperation between producer countries is likely, given the vast differences among the growers and the cutthroat nature of the international marketplace.

For Colombian farmers preparing for the start of interim harvests, hoping for the first profits they’ve seen in years means wishing misery for a mix of bad luck and good.