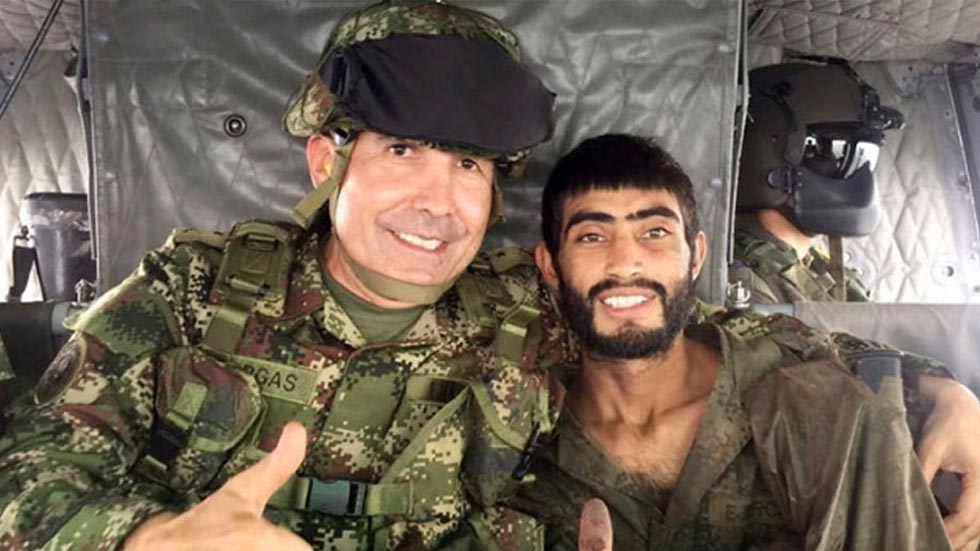 A Colombian soldier who was missing in the jungle for more than three weeks, found his way back to civilization after surviving his ordeal by eating raw tortoise and singing rap songs to himself, the Colombian army said.

Yefer Sanchez got separated from his unit on March 5 while on patrol in the dense tropical forest of central Colombia’s Meta province.

The army said more than 500 troops combed the jungle and flew over the area looking for the 26-year-old soldier, before a lone colleague stumbled upon him more than three weeks after he went missing.

Sanchez, who was found in a very vulnerable state, told local media that he had no food or water when he got lost.

“I was only carrying my equipment, my rifle, ammunition, helmet, some explosives… a poncho, a machete, a canteen,” he said.

He cited his army training as one of the key reasons for his endurance indicating that his survivor skills were severely tested.

“Thanks to my army survival training, I learned that anything that monkeys eat, we can eat too.”

He lived off seeds primarily and discovered that a red-footed tortoise is a culinary “delight.”

“One of them crossed my path and I had to take advantage. I ate it raw. I was very hungry by that point,” he said.

This jungle area in the Meta department is a hot-bed for guerrilla activity and Fonseca said he saw FARC rebels at one point while staggering through the thick vegetation, but decided against surrendering to them.

“I barely slept. I was just clinging to my rifle, always on alert,” he said.

To keep his spirits up, he sang rap songs to himself, a habit he is known for among his comrades, reported newspaper El Tiempo.

When he crossed paths with the soldier who found him, both initially pointed their rifles at each other, before the rescuer’s “very professional” handling of the situation defused the tension, he said.

Sanchez, who is being treated for dehydration and fatigue at a military base, said that he will continue his role within the army despite the ordeal.