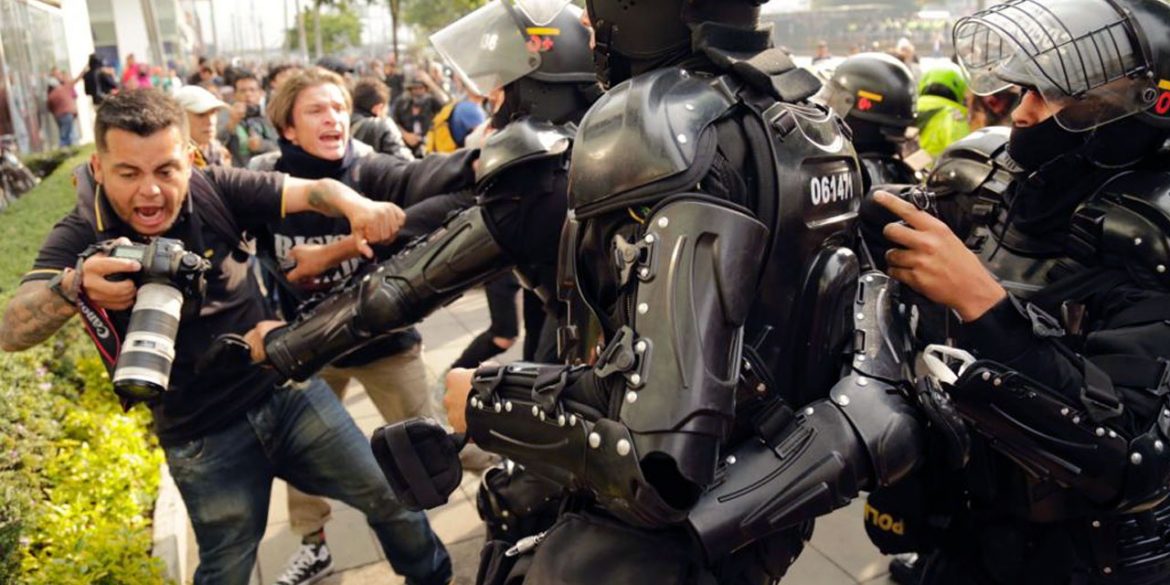 As tens of thousands of students, teachers, indigenous peoples and labor unions marched through the country’s biggest cities, they were largely praised by the organizations who arranged the marches and even by the police for their calmness.

“There has been absolutely no trouble here, it’s been excellent overall,” a police officer in Medellin told Colombia Reports early on in the protests.

The only trouble on behalf of students appeared to be paint balls thrown at the town hall in the southwestern city of Popayan.

One protester in Bogota told Colombia Reports that “sometimes there are those who try to sabotage the marches but we hope there are no disturbances so the protests keep their legitimacy.”

But as the day went on, Colombia’s notoriously aggressive riot police ESMAD began to use tear gas on students – who were earlier seen hugging officers as part of the protest – only to be met with desperate shouts of “no violence.”

Gas was used in the Caribbean city of Barranquilla first and within an hour police aggression was reported in Bogota, Cali and Medellin.

Scenes reminiscent of police brutality in Venezuela emerged in the capital as public transport was shut down and videos showing people scrambling to escape as officers in riot gear using unnecessary force started to circulate.

At least one journalist was attacked by police.

The United Nations said on Twitter they had met with students to receive their complaints about human rights violations. The students had asked the international organization to monitor the protests.

Stranger scenes entered the picture after centrist Senator Angela Maria Robledo shared a picture of what appeared to be a plain-clothed officer on a motorbike. According to RCN Radio, police said all their personnel were properly uniformed.

Colombia’s fourth protest to demand increased funding for public universities since the beginning of October comes at a time when President Ivan Duque, who took office in August, is under fire over controversial austerity measures that include sales taxes on basic food products and school books.

The right-winger has also been blasted by international organizations for not doing enough to protect social leaders in the country, who are being murdered at an unprecedented rate, in some cases by state forces.

The violent repression of the student protests is the second this month; at least three students were allegedly disappeared by police.

The scenes of police brutality were similar to those witnessed when students challenged the education policy of Duque’s political patron, ex-president Alvaro Uribe, and at least one student was shot dead.

Duque’s predecessor, Nobel Peace Prize laureate Juan Manuel Santos, was also taken on in 2011 by students who took to the streets, but were met with hardly any police force.