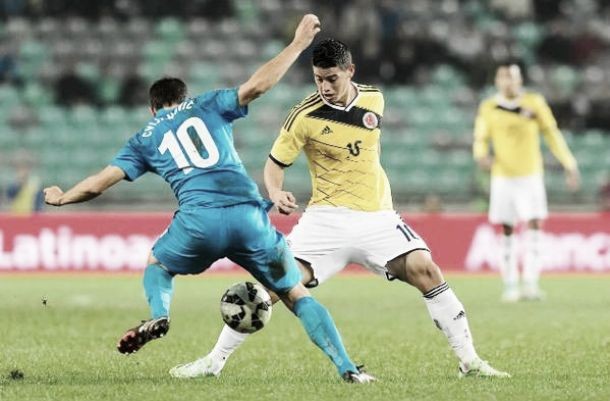 Colombia overcomes Slovenia 1-0 to round up best year yet

Colombia extended the winning streak to four straight games to finish the successful 2014 in style, as they beat Slovenia 1-0 in a Ljubljana friendly on Tuesday.

A first-half goal from Adrian Ramos was enough to secure Colombia’s victory against Slovenia in the last game of the year.

After being played in by Rodriguez’s penetrating pass, Ramos rounded the goalkeeper Jan Oblak and slotted the ball to the net for his third international goal.

On a frosty playing surface, Colombia managed to control possession and make good use of space in typically attractive style, with the newly appointed captain Rodriguez at the center of proceedings.

“Los Cafeteros” looked the more dangerous side all throughout the game, in spite sporadic long efforts and counter-attacks from Slovenia. James and Cuadrado linked up well with the forward pairing of Ramos and Jackson Martinez, who took over from Teofilo Gutierrez and Carlos Bacca – the goalscorers from Friday’s 2-1 win over the United States.

A wealth of relatively new players were giving a runout on Colombian side, including debutants Bryan Angulo and Carlos Bocanegra.

“I will tell the young Slovenian players to watch today’s game on tv and pay attention to the fighting spirit of the footballers in Colombian jerseys” said Srecko Katanec, the Slovenian coach, after the game.

Colombian soccer has had a very good year. The team led by coach Jose Pekerman climbed up to the third spot in the FIFA/Coca Cola World ranking and left a positive impression with their attacking-minded play and youthful enthusiasm.

Apart from two narrow defeats to Brazil, Colombia has won 9 and drawn 2 games, scoring a total of 25 goals in 11 games.

For the next game of the national team, the fans in Colombia will have to wait until March next year, when Pekerman’s team will begin the final round of preparations ahead of the summer’s Copa America in Chile.