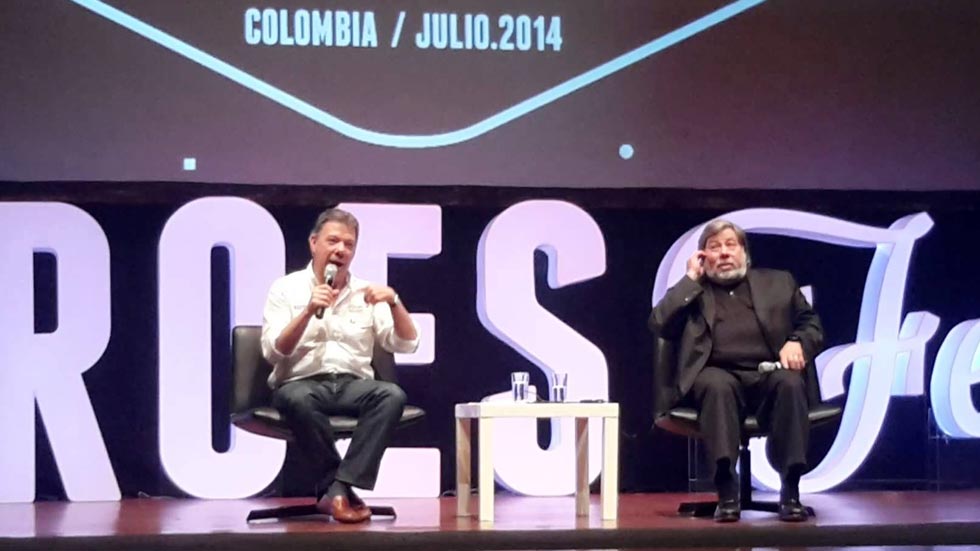 Colombia should focus on education to secure a better future based on innovation, Apple co-founder Steve Wozniak said during a meeting with President Juan Manuel Santos, local media reported.

“It is necessary for the country to educate people in science, engineering, physics and chemistry,” Wozniak said during the closing ceremony of the 1st Heroes Fest on Saturday.

Heroes Fest is a three-day event in the northwestern city of Medellin. 1,000 people participated all with an interest in forming a community of entrepreneurs in Colombia.

Steve Wozniak co-founded Apple with friend Steve Jobs and revolutionized the personal computer industry. Santos asked Wozniak what Colombia should do to become the next Silicon Valley where most US-based technology firms were founded and grew to become the biggest in the world.

Recreating the Silicon Valley growth model “is something that many countries want to do, but it takes time and the first thing is to have the foundation,” the 63-year-old engineer said.

“Colombia has already taken an essential step by recognizing the importance of technology and has better connectivity than many US cities,” the tech legend said.

Santos calls on entrepreneurs to sow seeds of innovation

In the interview with the president, Wozniak sent a message to the Colombian entrepreneurs that “inspiration and the desire to go somewhere is what drives us to do things.”

But he also stated that these days it’s very difficult to promote innovation in industries and recommended Colombian entrepreneurs to surround themselves with people who think differently and to find young talent to develop new research projects and keep moving.

Santos called on innovators to promote a new culture and sow seeds of entrepreneurship and innovation. The president said that innovators “are the heroes who teach us to think big to transform the country”, and added “I hope you have sown good seeds.”

Heroes Fest was organized by iNNpulsa, a Colombian government agency whose mission is to promote entrepreneurship; the National Learning Service (SENA); the City of Medellin’s Economic Development Secretariat and the Administrative Department of Science, Technology and Innovation, or Colciencias.