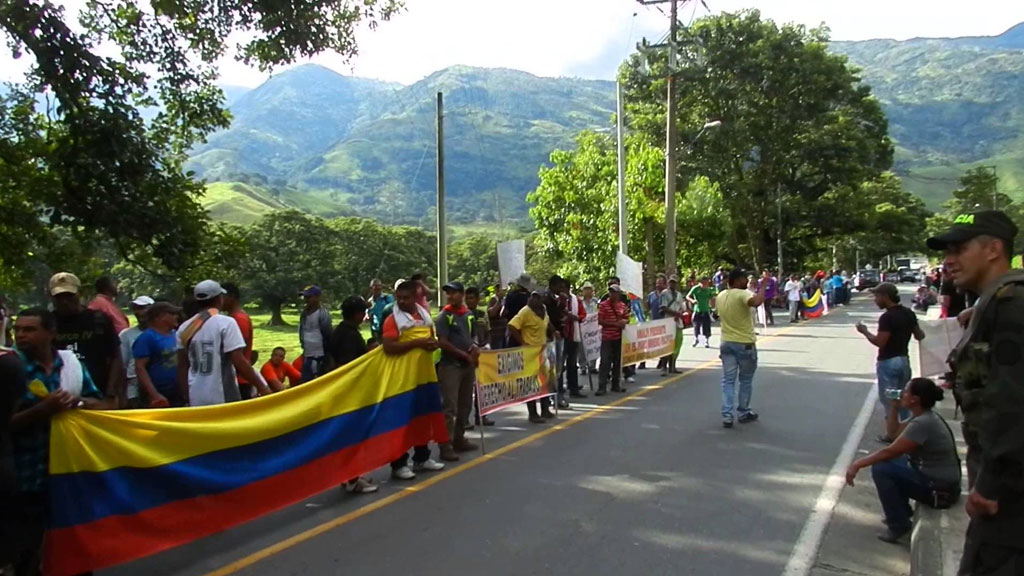 Tens of thousands of Colombian miners have taken to the streets in demand reform of the mining code and formalize informal mining, the third of such strikes since President Juan Manuel Santos took office in 2010.

The strike has been called by the National Federation of Miners who has complained about the government’s failure to act on their demands after earlier protests.

This National Federation of Miners estimates that some 350,000 small and medium miners are part of the informal, traditional and artisanal producers, of which about 150,000 are located in Antioquia, mainly in gold mining and coal.

Radio station Caracol expected some 60,000 miners to take part in the strike.

The key issues which have motivated the strike include the failure of the Government to complete four demands: Submit to Congress a project to reform the Mining Code, the development of mining guides, environmental order to regulate the activity and the creation of special reserves for small miners.

Colombia miners on strike to demand better treatment from government

There are also objections to the new Register of Traders Minerals (Rucom), since in its attempt to regulate mining activities and provide traceability to the production and marketing to the National Federation is paralyzing requirements for small informal mining.

The vice president of the National Federation of Miners, Luz Estella Ramirez told Caracol Radio that “unemployment is based on the failures of the government sector, we have signed three agreements with signatures of government ministers, but these are apparently useless as we are not included in the law. They treat us like criminals.”

Some of the protesters have even taken to seizing and destroying machinery suspected as being used for illegal mining. However, despite this, the Secretary General of the National Confederation of Miners of Colombia has assured the public that the strike should remain peaceful.

The main area where the protest will take place is in Antioquia where informal miners began to move from gold mining areas to the six assembly points where they started to march on Wednesday.

“Given the increased security forces in different sites of Antioquia, it is clear that it will be an entirely peaceful protest, claiming the government just want real solutions, certain, that allow us to keep working,” said the Secretary General Ruben Dario Gomez.

In response to the action, the deputy Minister of Mining Cesar Diaz Guerrero has planned a visit to the area for next week to try and reach an agreement with the miners and end the strike.

The government has responded by deploying 350 soldiers to try and maintain security and control in the region as it is feared that the latest strike will have adverse effects on the transport system in the Caribbean region and could cause severe delays.

If the strike is prolonged, it has the potential to greatly affect Colombia’s coal export industry which is already under intense scrutiny following allegations that multinational mining companies based in the South American country have been financing armed groups.

Colombia is the fourth largest coal producer in the world, producing 85.5 million tons of coal in 2013 alone, according to Reuters. Large-scale mining has been declared by Colombia’s President Juan Manuel Santos and ministers in his administration as the South American country’s engine of economic growth.

Mining is the second largest recipient of foreign direct investment after oil, constitutes nearly 7% of exports, and is 2.3% of Colombia’s GDP. Mining royalties is one of the Colombian government biggest sources of revenue.