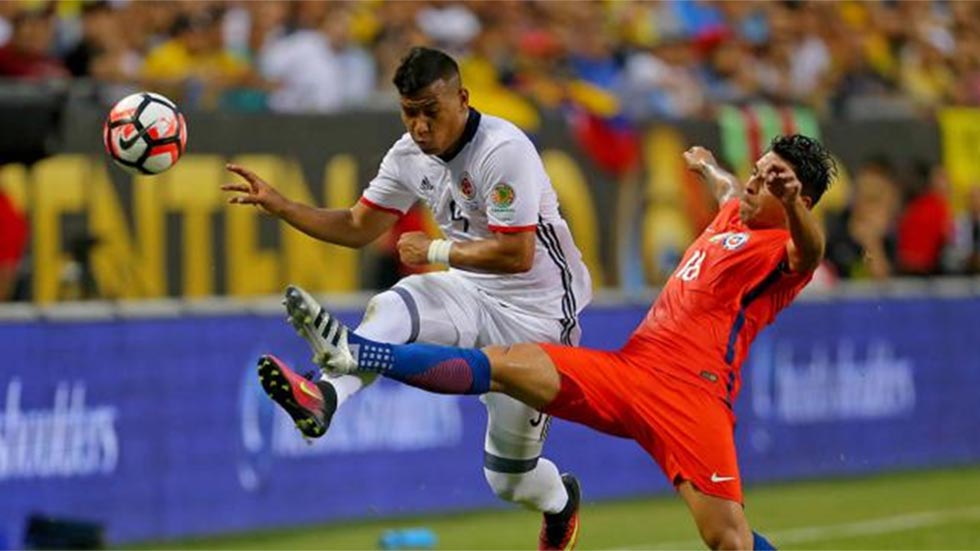 Chile beat Colombia 2-0 in the semi-finals of the Copa America Wednesday.

Charles Aranguiz and Jose Pedro Feunzalida scored in the first half, and defending champion Chile returned to the final of South America’s championship with a soggy 2-0 victory over Colombia on Wednesday night.

“This is a winning team. They are winners. … Before we play a tournament, they are convinced they are going to win,” Chile coach Juan Antonio Pizzi said.

Led by Bravo’s stellar effort in goal, Chile earned its fourth straight win since a 2-1 loss to top-ranked Argentina in their Group D opener. Next up is a rematch with La Albiceleste on Sunday night in New Jersey.

Chile also faced Lionel Messi and Argentina in last year’s championship, with La Roja winning 4-1 in a penalty shootout after a 0-0 extra-time draw. Argentina was the last country to repeat as Copa champions in consecutive years, accomplishing the feat in 1946 and 1947.

Pizzi said he was hopeful about Hernandez playing in the final, but it was too early to say anything for sure.

The familiar foes arrived at the semifinal coming off wildly different performances in the quarterfinals. While Colombia needed penalty kicks to eliminate Peru after a 0-0 tie Friday night, Chile roared into the semifinals with a 7-0 victory over Mexico that included five second-half goals.

Each country picked up right where it left off.

Pekerman talked Tuesday about his team’s inability to finish, and the same problem showed up again in the country’s first appearance in the Copa semifinals since 2004. Roger Martinez’s drive was stopped by a diving Bravo midway through the first half, and Bravo denied Sanchez with another lunging stop right before halftime. Rodriguez also shot wide on another prime opportunity.

Meanwhile, Chile quickly jumped out to a 2-0 lead, taking advantage of a Colombia mistake and making the most of another sharp play from Alexis Sanchez in his 100th appearance for the country.

Moments after the pro-Colombia crowd of 55,423 whistled and jeered while Chile passed the ball around its own end, a cross by Fuenzalida was inadvertently headed back into the middle by Colombia midfielder Juan Cuadrado. Aranguiz ran to the middle and volleyed it right by goaltender David Ospina for his first goal of the tournament in the seventh minute.

Then Alexis Sanchez cut inside to get open for a shot that bounced off the inside of Ospina’s right post and rolled toward the middle. With Ospina still on the other side after trying for a diving stop, Fuenzalida was all alone for the easy tap-in 10:44 into the game.

“We made mistakes and we paid for our mistakes in the beginning,” Pekerman said.