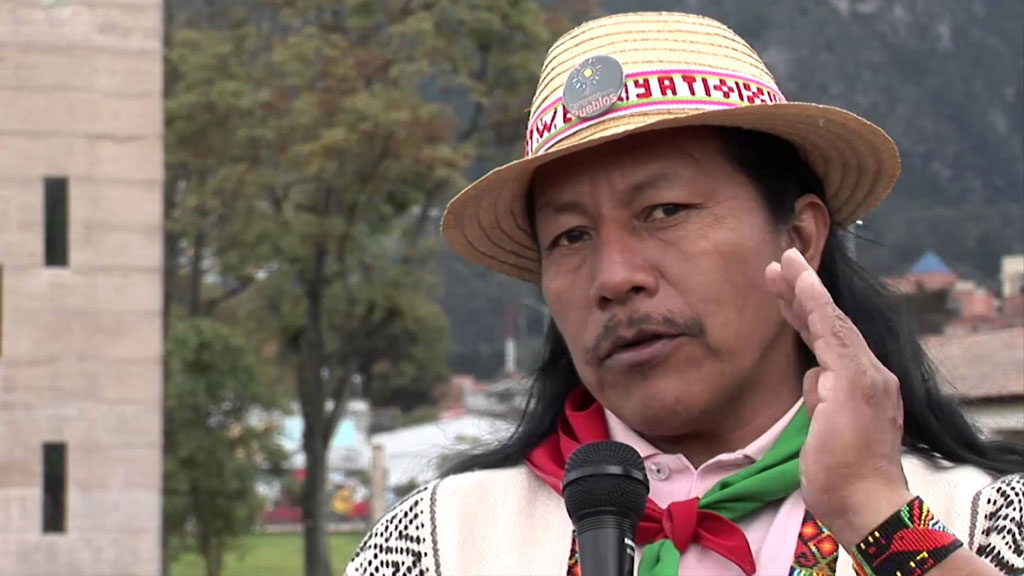 Colombia’s Prosecutor General and Inspector General on Monday called on the Supreme Court to overturn a decision to incarcerate one of the country’s most prominent indigenous leader for the detention of an army corporal.

Feliciano Valencia, a leader for the indigenous population in the north of the Cauca province, was imprisoned for 18 years for the alleged kidnapping of army corporal Jairo Danilo Chaparral.

This latest appeal claims that the decision infringes upon the rights of  Indigenous communities to hold legal jurisdiction over their territories enshrined in the 1991 constitution.

According to the vice Prosecutor General, Elka Venegas the punishment imposed upon Chaparral was in accordance with Indigenous law and Feliciano cannot be held solely responsible.

“There was an arbitrary or willful detention, not individual acts that can be attributed to Feliciano Valencia Medina but a collective decision of the Nasa people was executed, “said Venegas.

Former National Peace Winner, Valencia was sentenced to 18 years in prison in September after he was accused by the Prosecutor General’s Office of kidnapping and physically abusing a corporal in Colombia’s military, who was accused of spying on an indigenous protest in 2008.

The Prosecutor General stated at the time that “subjects with covered faces holding batons and machetes, accosted the third corporal of the army, Jairo Danilo Chaparral Santiago, and forced him in to a van.

In the presence of 400 indigenous people, they beat him and then moved him to a town council building where he was put in a guarded cage, tied up and blindfolded.”

Colombian indigenous leader will not serve 18-year sentence in prison

The detention took place at a time when Indigenous movements waged a national 60,000-strong mobilization to demand respect for Indigenous rights.

The incident heightened tensions between the Indigenous communities and government as the then President Alvaro Uribe accused them of having links with left-wing guerrillas.

While the accusations were fired at Valencia, community leaders assert that the military man was dressed in plain clothes to infiltrate the movement and collect intelligence.

The basis of the appeal is that he was captured on Indigenous territory and tried under customary Indigenous legal systems, in accordance with the right to jurisdiction.

While the appeal will deliberate on the individual liberty of the accused Feliciano Valencia, the case has major implications for the relationship between the government and indigenous communities.

Approximately 200 indigenous people traveled to Bogota on Monday in a show of support for their leader in a case that will decide the future of indigenous communities’ constitutional right to administer justice in their territories.

“Feliciano Valencia is a symbol of peace, representing the struggle and dignity of the indigenous people of Colombia and Latin America, the indigenous, the innocent are awaiting indigenous jurisdiction by that act, Mother Earth is waiting with open arms celebrate his innocence,” said his lawyer German Pabon Gomez  to the Criminal Chamber.