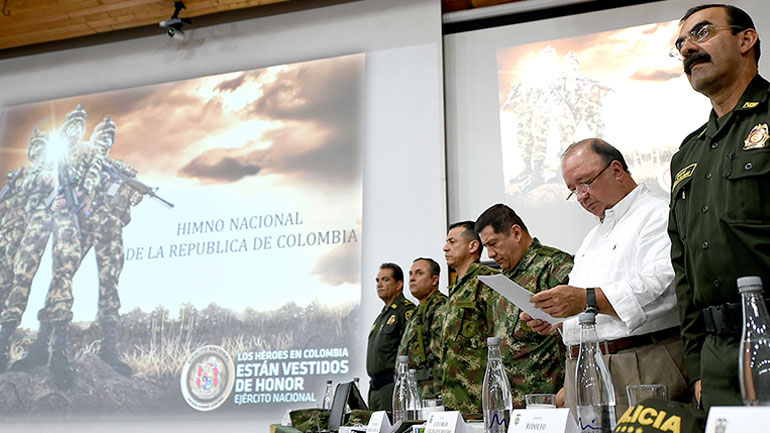 Colombia’s defense minister and the country’s military command on Thursday said that a transitional justice agreement between the government and FARC rebel group is “the most important news in one hundred years.”

Minister Luis Carlos Villegas, flanked by the military’s top  welcomed the progress made so far in the peace process. Talks between Colombia’s government and the FARC have been taking place in the Cuban capital of Havana since 2012. Both sides had agreed to address five key points during the talks, with transitional justice being seen by many as one of the most difficult areas in which to reach a consensus.

According to the minister, “Three years ago, when I was part of the negotiating team at the peace table, reaching an agreement on transitional justice looked impossible…the FARC denied its ability to undergo prosecution in the Colombian justice system, had no clear intention to disarm and of course [they] had no possibility of accepting dates for the completion of disarmament and negotiations.”

“Today after Havana we have a clear and robust system of justice that guarantees no impunity, to be applied to both the guerrillas and the government agents and other agents who participated in the conflict, which guarantees justice and legal certainty for the future,” Villegas added.

The agreement, while by no means allowing for true impunity, certainly allows for light sentences for perpetrators of even the most serious crimes on both sides.

The type of punishment will vary case by case. Individuals who plead guilty to their crimes will face a “restriction of liberties” and be forced to contribute in some way to projects and initiatives that benefit the public good in an initiative that highlights community service and victims rights.

Even for extremely violent crimes such as genocide, torture, sexual violence and forced displacement, those “coming clean” will face a sentence of “restricted liberty sentence” of five to eight years. This sentence, while by no means constituting true impunity, is much lighter in sentencing than what some anticipated would come of the ongoing talks. Military members found guilty of crimes who comply with regulations will never even have to set foot in a Colombian prison.

For those who do not cooperate, a 20-year sentence in a regular prison will be the standard punishment.