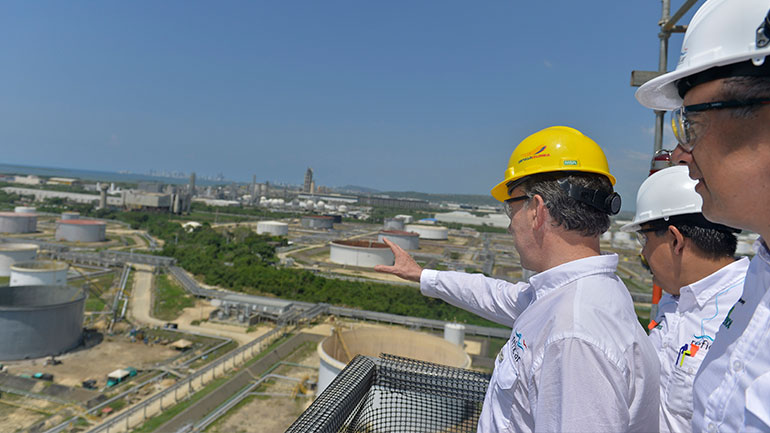 Colombian state-controlled oil company Ecopetrol on Wednesday inaugurated a newly expanded refinery capable of processing 165,000 barrels of crude per day and equipped with the most modern technology in Latin America.

The upgraded Cartagena Refinery, or Reficar, which will be fully operational by March 2016 at the latest, was revamped and expanded at a cost of slightly more than $8 billion.

The refinery could account for as much as 1 percent of Colombia’s gross domestic product and 10 percent of industrial GDP, President Juan Manuel Santos said at the inauguration ceremony.

Once fully operational, its different units also will process 220 tons of sulfur per day and between 2,400 tons and 2,700 tons of coal per day.

In addition, the refinery will produce oil by-products that Colombia had never produced before, such as coke.

The sulfur content of the diesel it produces, meanwhile, will be 10 parts per million, compared with 2,400 ppm previously.

“In the case of gasoline, (the sulfur level will fall) from 800 to less than 50 parts per million,” Santos, who hailed the positive impact on the environment, said.

Those upgrades will make the refinery one of the world’s most efficient in terms of ecosystem impact.

New production capabilities also will obviate the need for Colombia to import many petroleum derivatives, according to Santos, who said the refinery’s profits will rise three-fold from $6 to $18 per barrel processed.

“We’re going to be much more efficient, much more competitive, and that will increase the Finance Ministry’s resources,” Santos said.

The refinery will generate a total of some $20 million in daily revenue, according to Santos, who said the inauguration of the refinery was “a key step in [Colombia’s] development.”