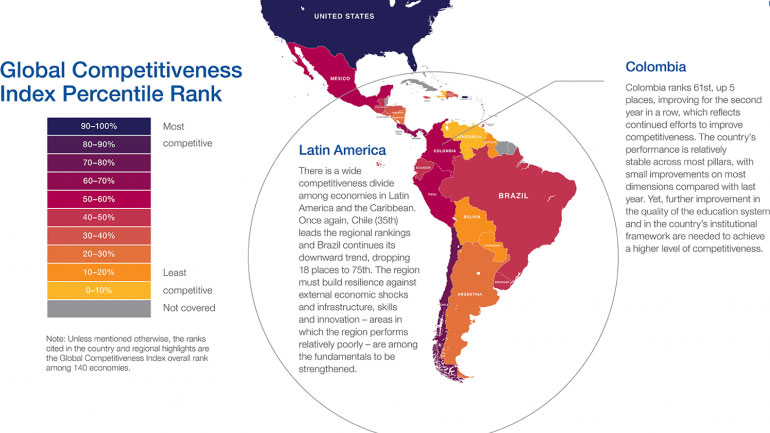 Colombia rose five places in the Global Competitive Index (GCI) for the second consecutive year, gaining an edge in the international economic landscape.

Conducted by the World Economic Forum (WEF), the index measures a country’s productivity using a multitude of economic factors including education, innovation and technology.

Colombia advanced this year thanks largely to an impressive improvement in financial market development (up 45 places to 25th since last year).

The country also saw relative improvements in health and education, albeit remaining at a low position (97th) in the global context.

To diversify and innovate the economy, it is particularly vital for Colombia to invest in the quality of math and science education, which were recorded as the 24th worst in the report.

Within Latin America and the Caribbean, Colombia came in fifth place, with the all-around regional champ being Chile, ranked at 35.

Earlier this year, Chile and Colombia were singled out among a sample of 44 countries as the world’s leaders in entrepreneurship. For the size of their economies, they have high levels of new businesses and efficiency in creating jobs, stated the report.

While Chile leverages talent from around the world through its suite of private-public initiatives, Colombia must use a different approach, considering the distinct challenges it faces, including high inequality and risks of political instability, according to the WEF.

In the context of the GCI, Colombia’s greatest apparent obstacle to continued competitiveness is its institutional framework. Out of the 140 economies measured, Colombia slid in at 114th in this category.

Excessive bureaucracy, corruption, and lack of transparency, among other factors, undermine a country’s institutional framework. To further advance its regional competitiveness in the next year, Colombia needs improvement in these areas and in education to strengthen productivity, stressed the WEF.