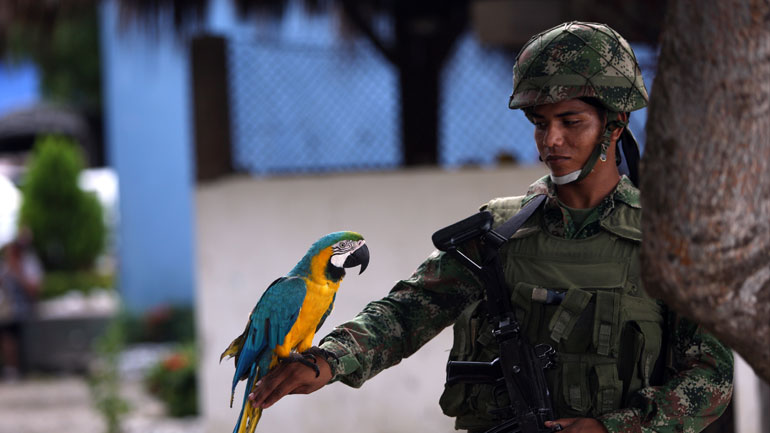 While not formal, Colombia has been enjoying de facto truce for 3 months

Colombia has been effectively enjoying a ceasefire since December 2015 when observers registered the last army attack on FARC units ahead of a formal deal on a truce.

As the talks between Colombia’s government and the FARC enter the final stages ahead of the March 23 deadline, both sides are discussing the remaining issues of a permanent bilateral ceasefire and the demobilization of the left wing guerrillas.

Guerrilla leader Carlos Antonio Lozada told the media on Sunday, that both sides are close to reaching an agreement regarding a definitive ceasefire.

“In regards to the ceasefire, we have minimal differences in the procedural aspects but we are in the closing days of this agreement.”

While it is expected that a major announcement of this ceasefire will be made close to the deadline, statistics of actual offensive action by either the FARC or the military since the guerrillas’ July 2015 unilateral ceasefire indicate that Colombia has in effect being enjoying a truce for more than three months already.

According to the latest monthly conflict report published by CERAC, no attacks by either warring party has been registered over the past three months.

“Since 86 days ago no offensive actions of the FARC are recorded. 84 days are completed without ever recorded fighting between the security forces and the guerrilla group,” the NGO said late last month.

“This is higher consecutive number of days without violent actions of the guerrillas since 1964.”

The FARC announced a ceasefire in July 2015. The State reciprocated the ceasefire by calling an end to air assaults. However ground troops remained active. Despite this, the state too have maintained their pledge to de-escalate the levels of confrontation.

“To date, no recorded actions that violate commitments to the de-escalation by the State have occurred during the seven months,” the report stated.

Moreover, “84 days have passed without any registries of offensive action against the FARC,” meaning that in effect “the conflict with the FARC has completely come to a halt.”

The last bombing by the security forces against this group was recorded on May 25, 2015, when five guerrillas, including the top commander of the guerrilla’s 18th Front, “Roman Ruiz,” was killed.

On the part of the FARC, the evidence is similar.

The CERAC report measuring the period July 20,2015 to February 20, 2016 indicated “to date, only  six offensive actions registered have enough documentary information that can be qualified as a violation of the commitments of de-escalation by the FARC. In these actions, records indicate a civilian died, and two civilians and one Army soldier were wounded.”

While there has been a lot of talk from Havana regarding the announcement of a definitive bilateral ceasefire, the real success of the negotiations will be measured by the level of progress on demobilization.

However, since the peace talks resumed on March 2, both sides are working to reach such settlement before the deadline.

This was acknowledged by guerrilla leader on Sunday. “We are feeling the end of the armed confrontation,” he said.

Lozano added too that progression towards a demobilization settlement is ongoing as the FARC negotiating team has delivered its proposal for the process of disarmament, which is considered the core of the peace deal, and is waiting for it to be discussed and agreed upon in Havana.

One thing that could distort the number of registered FARC attacks is that authorities have stopped accusing suspected culprits in the event of an attack. This means that several attacks that could have been carried out by dissident FARC guerrillas were simply never made public or attributed to the smaller ELN rebel group.

The FARC and the Santos administration have been negotiating peace since November 2012 and are widely considered to be in the final stretch before singing an end to the conflict that began in 1964 and since cost more than 260,000 Colombian lives while millions were displaced.