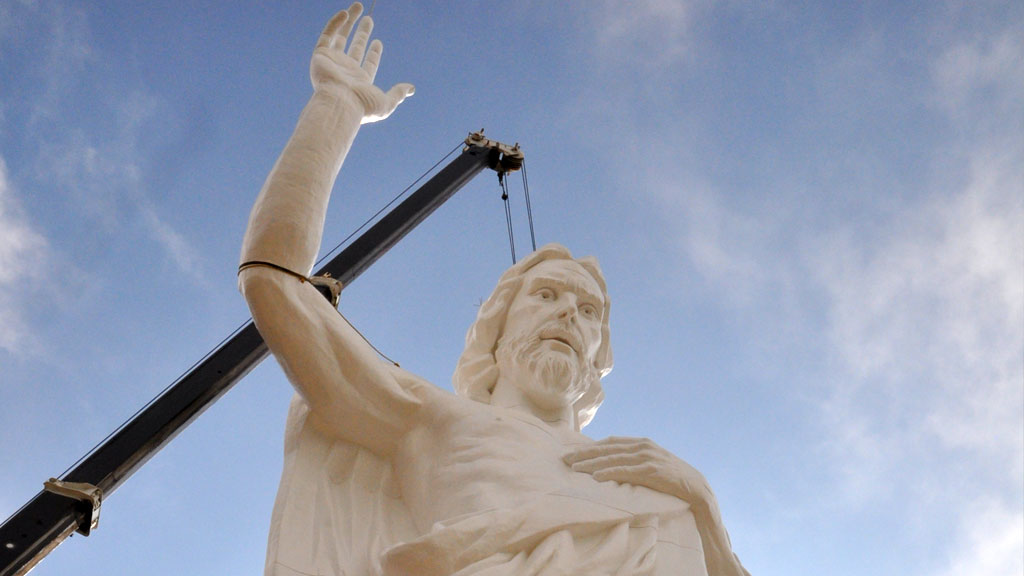 A massive and controversial monument of Jesus Christ, which has sprung up in central-east Colombia in past weeks, is touted as the tallest such statue in the Americas.

Just outside Bucaramanga, the capital city of the Santander state, works on a Christ statue standing as tall as 43 meters (including the 10-meter pedestal) are drawing to a close. Once completed, the Colombian Jesus will officially dethrone its more famous Brazilian counterpart from Rio de Janeiro and take the crown for the tallest Christ statue in the Americas.

The building will feature a look-out from the tip of Jesus’ head, accessible thorough elevators. In the vicinity, there will be a hotel, a zoo, a boulevard and a cable car.

The monument cost the government of Santander around $20 million. The Christian-themed park should boost tourism into the region, the park director told local media.

“We estimate that in the next ten years, the state will have two million visitors annually,” said Carlos Fernandez Sanchez, the director of the Natural Park of Chicamocha, responsible for the “El Santisimo” undertaking.

Jesus not in everyone’s heart

Not everybody is as enthusiastic however. Locals have sued the state government’s contribution to the project for not respecting the separation of church and state.

The local government’s lawyers refuted the allegations by claiming that the gigantic sculpture of a young man with a beard, wrapped in a robe is in fact not the Christian Messiah, but “an abstract figure, unique and at the same time universal for all creeds and persuasions”, which features “christian, buddhist, hindu, pagan, egyptian and pre-hispanic iconography.”

Questioned are also money matters related to the massive investment. Out of $20 million splashed out on the project, only $5 million come from royalties. The rest are funds that come from the Santander treasury. Additionally, Panachi, a non-profit corporation in charge of construction and management of the statue, reinvests the profit and thus won’t put money back in the local budget.

“We believe that if the local government invests in projects that generate returns, the profit should be reinvested to the benefit of the people of Santander,” Henry Hernandez, the councilman of the Liberal Party, told weekly Semana.

According to the representatives of Panchi, the prosecution hasn’t come across any irregularities in the way the “Santisimo” project is carried out.

“In tourism, you always have to be one step ahead, if you want people to come back. You need new attractions, new services, you need to grow every day,” concluded Sanchez.

Despite the critique and complains, the undertaking is in the homestretch. Last week Friday, the assembling of the monument has been concluded, as the concrete Jesus received its head. However, it will take a couple of more weeks before the monument is ready to host first visitors.

There are more famous Jesus statues in Colombia. The image of Cristo Rey towers over a village of Las Andes, just outside of Cali, at full 26 meters. The statue was inaugurated in 1953, in celebration of the fifty years following the end of the War of a Thousand Days. A tourist attraction, Cristo Rey of Las Andes is classified as one of the modern wonders of Colombia.

Among the main tourist attractions of the state of Caldas in the Paisa region, is the soaring monument of Christ the Redeemer, which has in the past been described as the tallest statue of depicting Jesus Christ in the Western Hemisphere.

The arguably most famous monument of Christ in the world is Cristo Redentor of Rio de Janeiro, located at the peak of the 700-metre (2,300 ft) Corcovado mountain overlooking the city of Rio. The iconic Cristo stands at just above 30 meters (not including the pedestal) and its arms stretch 28 meters wide.

However, as things stand now, the official Guinness Record holder among tall Jesus Christ statues across the world is situated in Swiebodzin, in western Poland. Without any pedestal or plinth included in the measurements, the figure depicting Christ the King stands at 33 meters. It is situated in the middle of a cabbage field.

Notwithstanding, the very tallest statues in the world are not those of Jesus Christ, but of Buddha; in China, Burma and Japan. The Spring Temple Buddha located in a Chinese city of Leshan takes the cake, rising to an unparalleled height of 128 meters.