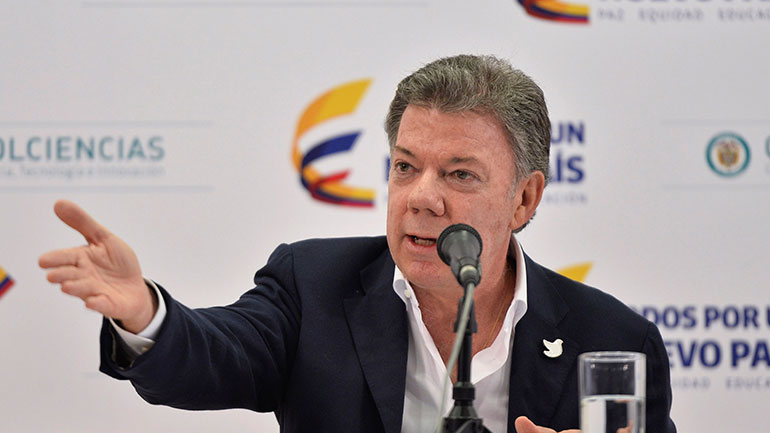 Venezuela and Colombia each recalled their ambassadors to the other country on Thursday, amid a diplomatic crisis sparked when socialist-run Venezuela closed two border crossings and deported over a thousand Colombians.

Venezuelan President Nicolas Maduro shut the crossings last week after a shootout between smugglers and troops wounded three soldiers. He later extended the closing indefinitely and has characterized the deportations as a crackdown on paramilitary gangs.

“I have favored dialogue and diplomacy and I will keep doing so, but I cannot allow Venezuela to treat Colombia and Colombians this way,” the center-right Santos said in Bogota.

“These families aren’t paramilitaries, they are humble families,” Santos said. “And they were thrown out, as they said to me, like dogs.”

Nearly 1,100 Colombians living in Venezuela have been deported since the border closure, and Santos said between 5,000 and 6,000 more have fled voluntarily.

Many of those deported said their houses had been destroyed. Hundreds have waded across the river on the border carrying refrigerators, animals and mattresses.

The Colombian government said the Venezuelan foreign minister had agreed to let moving vans cross the border on Thursday to remove possessions of fleeing Colombians, but that the trucks had not been allowed in.

Maduro says the deportations are part of a crackdown on Colombian paramilitaries who smuggle fixed-price goods and traffic drugs on the porous 2,219-km (1,379-mile) border.

Speaking earlier on Thursday, the Venezuelan leader said he hoped the Colombian government would “regain its sanity” and do more to protect the border. “Until that happens, I won’t open the border,” he said at a rally.

The spat recalls the frequent disputes between Venezuela and Colombia during the 14-year rule of Maduro’s predecessor, Hugo Chavez. Critics say Maduro is copying his late mentor by stoking a crisis to distract Venezuelans from economic problems in the run-up to a parliamentary election in December.

Santos has also faced criticism for his handling of the crisis. Ex-president and current opposition Senator Alvaro Uribe visited the border this week and decried what he said was government inaction in the face of aggression by the Maduro “dictatorship.”

Santos’s ruling coalition will compete with Uribe’s right-wing opposition party, among others, in local and regional elections on Oct. 25.

(Additional reporting by Monica Garcia in Bogota and Eyanir Chinea in Caracas; Editing by Leslie Adler)